D. Shivakumar, chairman and CEO of PepsiCo India, believes that his job is to collaborate-execute-own

A well-stocked, floor-to-ceiling wooden bookcase, a round meeting table and a compact sofa—my first impression of D. Shivakumar’s office in Gurgaon, near Delhi, is that it resembles a library or a study more than a chief executive officer’s (CEO) office. This is also PepsiCo’s headquarters in India.

It turns out that 57-year-old Shivakumar (popularly known as “Shiv"), chairman and CEO of food and beverage company PepsiCo India Holdings Pvt. Ltd, alternates between two workspaces in Gurgaon: two days at one, three days at the other, moving between these spaces in his own peripatetic adaptation of Delhi’s “odd-even" traffic formula. The second workspace, located across the road from the “library" office, is a more conventional C-suite, with an L-shaped desk, a cabinet with books and a meeting table.

Shivakumar has been working out of the two workspaces since he was appointed to his role in December 2013. Rather than just occupying the designated CEO cabin in one building, he made himself more visible and accessible to colleagues by straddling two offices. “I think all good leaders have the following traits—authenticity, accessibility, and a huge learning ability. So the only way to build authenticity, as the world gets more digital, is to understand that the value of face-to-face interactions has become even higher. So you have to be seen and be accessible to your people," he says, explaining the need for two offices.

Most CEOs share their views on management, business and the economy during the course of the Head Office interview, but few read business books extensively and fewer still will distil their thoughts into management truths. 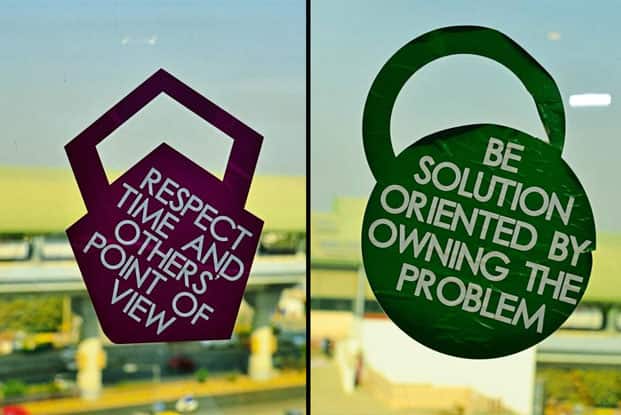 “The digital world has completely broken the command and control system," he says, explaining that leaders must “micro-sense" and not “micro-manage".

“Sensing is through discussion, data, intuition, many touch points, and once you have that micro-sensing, you are able to feed it back to your team to say, ‘Hey, this is what I am picking up,’ as opposed to saying, ‘I am going to manage this actively for you.’"

Apart from authenticity and accessibility, Shivakumar believes leaders must be willing and able to learn. “The paradox of being a good leader in today’s connected digital world is that you have to be both, a very good teacher and an equally good student. So, you need a teachable point of view and you need that learning agility," he says.

Finally, Shivakumar believes that “a good CEO needs to have what I call DE&F, where D is discipline, E is energy, and F is focus. You can be scattered all over the place and have no focus, but it doesn’t help. What you need to do is to be focused; you need to sense everything going around that focus area."

It is an elaborate menu of leadership skills and personality traits, and makes me wonder whether Shivakumar has fulfilled the criteria that he’s outlined for himself in his tenure so far at PepsiCo.

Shivakumar does not share numbers but says simply that “we’ve done well, we’re going in the right direction, the focus on brand strategy has been good, and in terms of people, we have the highest engagement levels ever."

Figures from the Registrar of Companies show that though the flagship company, PepsiCo India Holdings Pvt. Ltd, remains a loss-making business, it had double-digit revenue growth from 2013-14 to 2014-15, and reduced losses in the same period.

If Shivakumar is able to steer the company to profitable growth as convincingly as he presents management insights, it is quite likely that one of the management books on his shelf in future will be one authored by him.

Aparna Piramal Raje meets heads of organizations every month to investigate the connections between their workspace design and working styles. She is the author of Working Out Of The Box: 40 Stories Of Leading CEOs, a compilation of Head Office columns, published as part of the Mint Business Series.