Home / Mint-lounge / The grand galleries of Bombay
Back
Share Via

The grand galleries of Bombay

The grand galleries of Bombay

Mumbai would not be the city it is today without its chawls. These three- and four-storey blocks of one- and two-room tenements dotting all of south and central Mumbai, built on a massive scale over the 19th and early 20th centuries by both the colonial government and private landlords, stand at the centre of the city’s social history. Although each of the great chawl neighbourhoods—Girgaon, Girangaon, Kalbadevi, Worli, Byculla—has its own distinct history and religious and class composition, together they form an architectural and city-specific continuum through which many of Mumbai’s traits can be understood. The quiddity of chawls and their influence “as a historical actor" on Mumbai’s landscape are illuminated through a variety of academic and narrative perspectives in Neera Adarkar’s excellent new anthology The Chawls of Mumbai. 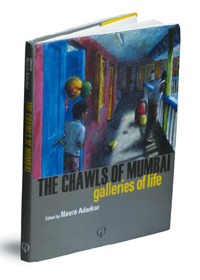 Chawls began to come up in great numbers in the “Indian quarter" of Mumbai, north of the spacious, landscaped European quarter in Fort, from the mid-19th century onwards as the Indian cotton industry boomed, filling up the breach left by the Civil War in America. The colonial government and an emerging class of Indian capitalists needed labour; and migrant workers thronging the city from the Western Ghats and the Konkan coast needed cheap housing. As Mumbai (then called Bombay) urbanized and industrialized, many chawls were built by private parties on what was formerly farmland. But after an outbreak of plague in 1898, attributed to unsanitary conditions in the native neighbourhoods, the colonial government stepped in, in its own interest, to build chawls on a large scale. The massive Bombay Development Department (BDD) chawls in Worli, for instance, a colony of over a hundred chawl buildings, were built by the government on what was then cheap uninhabited land in north Bombay, now turned by the advance of history into what might be thought of as Mumbai’s centre.

From the beginning, then, the chawls were marked by human plenitude, by an enormously resourceful attitude towards space, and the assumption of openness to continuous negotiation and “adjustment". Although (some would say “because") chawls threw great numbers of people together, they tended to be socially homogeneous, each chawl marked by the stamp of a particular religious or caste group and brought alive by the same festivals and mores. Though often remembered now with the rose-coloured glasses of nostalgia, they were fractious places, from quotidian squabbles over space, water and access to the communal toilets to murderous communal disharmony during times of crisis.

“It is difficult to view a chawl as an empty built form in isolation, like a bungalow or an apartment building," writes Adarkar in her excellent introductory essay, “because a chawl cannot be stripped bare of its occupants. Its existence in the cityscape can be seen as a theatre, imagined only with performers on a stage." It was this human crush, fending for itself as best it could and devising a variety of creative solutions to problems of food, domesticity, and childcare, that turned Bombay, over the decades, into “the city of gold". Elsewhere, Adarkar observes acutely that the chawl corridor, the centre of its social life and the space that turned a building into a kind of neighbourhood, “brought a spirit of buoyancy to the interface of the chawl and the city, and diffused the boundaries between them." This “chawl spirit" has been extensively investigated and celebrated in the city’s literature, from the short stories of Saadat Hasan Manto to P.L. Deshpande’s famous Marathi work Batatyachi Chal (The Potato Chawl) to Manu Joseph’s recent novel Serious Men.

After the passing of the Rent Control Act of 1947, which froze existing rents and granted many more rights to tenants than previously, the humble chawl-room suddenly acquired a great cachet as “property". Many renters chose to evict other men whom they entertained as sub-tenants and bring in their families from the villages, completely altering the social character of the chawls and throwing up a fresh set of problems of adjustment to the needs of women. The Rent Control Act also spawned the city’s indigenous pagdi system of property sale, whereby long-time tenants who could not be shaken by landlords could sell their tenancy rights to a third party as long as they passed on a third of the sale price to the landlord.

As Mumbai became a post-industrial city with the closure of the textile mills in the 1980s, and in succeeding decades, home to the new wealth of a post-liberalization “new economy", the chawls became first the site of the despair of joblessness and then the object of the profit-seeking eyes of developers. Many chawls today stand uncomfortably in the shadow of tall apartment buildings that were only recently themselves chawls. Creaky with decay and disrepair, sometimes crashing down completely in the gusts of the monsoon, they still comprise a large portion of the available housing stock in the island city.

From Prasad Shetty in his superb essay Ganga Building Chronicles to the Dalit poet Namdeo Dhasal in My Old Neighbourhoods, the contributors to Adarkar’s book do an excellent job of characterizing not just how the chawls made up the motley social fabric of the city and themselves changed as social spaces, but also what they have contributed to the city’s vocabulary, from the word gala, or dormitory, to the concept of the “gallery gaz", or a measure as wide as a chawl corridor. Somewhere in the story of almost every migrant family in Mumbai—and most people in the city are migrants—lies a chawl. The place of this architectural form in Mumbai’s history is extensively mapped in this chawl-like concert of energies, one of the most warming books ever produced about the city.