The heroes in Havana hats

The heroes in Havana hats

I, the undersigned, wish to tell you, in all earnestness, that I am part of the great unwashed who has little or no interest in this gainly game called cricket. I realize that this puts me in a minority, not just in this nation of one billion, but also in my own home, where family members frequently call each other up from as far away as New Zealand to ask whether “mother and baby are safe", and also the Test score. As for me, I am interested in those funny little men in Havana hats who make gestures with their hands. Occasionally portly, always courteous, they look like English vicars who have stepped off the pages of a Jane Austen or Emily Bronte novel. Umpires, they are called, and the question I put before you is: Are they in danger of becoming obsolete? 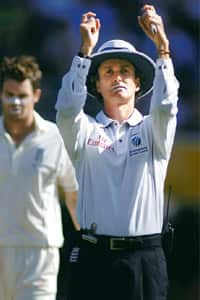 Retired umpire Dickie Bird was in the news recently, protesting against the Umpire Decision Review System (UDRS) which he said was “belittling" umpires and stripping them of their powers through the usage of excessive electronic aids and technology. Electronic aids, according to Bird, should only be used for the close run-out decision, which he admits is a tough call.

In a sense, Bird’s lament is as old as the game itself and it brings to the fore the age-old question that plagues sports, and for that matter, any human endeavour. At what price, progress?

The current avatar of the Olympic Games, for instance, with massive opening ceremonies, electronic replays and steroid-pumped super-athletes, has a tenuous connection—if that—to ancient Greece where the Games originated. Defenders will say that the Olympics remain faithful to their heritage in spirit, if not substance. Similarly, today’s Wimbledon matches bear no resemblance to their stately past, replete with tea sandwiches, gentlemen in top hats and ladies in tight corsets cheering and waving hankies at the players. Today, Nadal’s grunts, Serena’s screams, Sharapova’s skirts and Connors’ swear words have put paid to any pretence of gentility. Football, on the other hand, particularly in Africa, has lost the rough and tumble spontaneity of its origins in shantytowns and has turned into a structured, lucrative and competitive juggernaut.

Games change and cricket umpires, like it or not, will have to go along.

Umpiring can be exciting. You only need to hear New Zealander Billy Bowden, who recently completed 150 One Day Internationals (ODIs), talk about his job to realize that. In media interviews, Bowden said: “Umpiring still gives me a buzz, even goosebumps, when I walk out to officiate an ODI. I have to pinch myself now and again to realize what a privilege it is to be part of such a wonderful game and to have the opportunity to challenge my skills at the international level."

What is the “buzz" of umpiring? Is it the realization that the fate of the game and its players hangs in the balance of your hands? Or are umpires merely score counters, if that? Are they necessary for cricket in an age when games are getting shorter? And who are the world’s greatest umpires?

The answer to the last question is relatively easy. Most shortlists come up with the same names: Simon Taufel, Aleem Dar, the late David Shepherd, Dickie Bird, Steve Bucknor, Rudi Koertzen and S. Venkataraghavan. It is only when discussions veer towards criteria that things get complicated and the list gets juggled around.

On the face of it, umpiring is about calling the shots, quite literally. The umpire has to make split-second decisions that have to be correct and consistent, thus earning him the respect of the players and the audience. His calls should not falter under the scrutiny of post-play television replays. All this seems easy enough. Then why the fuss about umpires?

To me, the trait that sets apart the great umpires is their ability to stand still and concentrate for hours on end. It is one thing to run around the field in a testosterone-induced zone. It is quite another to be surrounded by all these macho men and yet retain a Zen-like calm and concentration. Any parent who has umpired a match between screaming 10-year-olds will tell you that this isn’t easy. Real life umpiring frequently results in a downward spiral where both players and mothers (I mean, umpires) end up yelling at each other. Professional umpires do not have the luxury of falling prey to the shouting and emotions that swirl all around—from the players and from the audience. To remain sphinx-like amid chaos is the gift of a great umpire.

As for the question about whether umpires will become obsolete, I don’t think Mr Bird has anything to fear. Technology does a lot but it has not and cannot compensate for human judgement. In the past, the criticism against national umpires was that they were naturally biased towards their own teams. Today’s neutral umpires have silenced that criticism. Television replays have only made umpires strive to become better since they are competing against a machine. Then, of course, there is the decorative factor. If umpires don’t provide a soothing counterpoint to the players, then who will? Certainly not cheerleaders. Cricket is a long way from that, the Indian Premier League notwithstanding.