Home >Mint-lounge >We came in peace

We came in peace

We came in peace

It’s been 40 years today since the first and only moon walk and Discovery Channel is out to celebrate it big bang. The channel will be airing a special documentary tonight at 10pm on the 1969 Apollo 11 mission, the first manned mission to land on the moon. 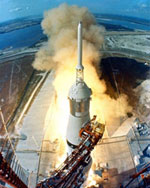 So, tune in to relive the historic moments of Neil Armstrong’s first moon steps and hear him say his famous quote, “That’s one small step for man. One giant leap for mankind." And definitely watch out for the celebrated and much-parodied plague that read “Here Men From Planet Earth First Set Foot Upon the Moon. July 1969 A.D. We Came In Peace For All Mankind."

When We Left Earth: The Nasa Missions will be aired on Discovery Channel at 10 pm tonight. There will be no repeat telecast.