As India approached the 50th anniversary of its independence in 1997, a few Indian playwrights, notably from Maharashtra, had begun to present the compelling figure of Mahatma Gandhi on the Indian stage. The preceding years had seen the rise of the right wing forces, the rath yatra, the assassination of a prime minister and the deregulation of the Indian economy. The epochal changes and a general mood of stocktaking no doubt contributed to a reassessment of nationhood and its central ideas. 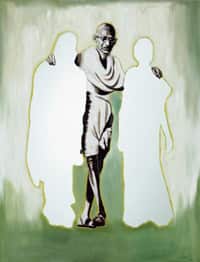 Art by Sachin Karne. While viewing this untitled work of acrylic on mirror, the spectator becomes a part of it. The artist invites the viewer to walk alongside Gandhi and the two daughter figures who always accompanied him. At Saffronart Gallery, Mumbai, till 15 February

The depiction of Gandhi in these early plays was as varied as the sympathies of the playwrights and the points of view adopted by them. Thus Gandhi appeared as a failed father in Ajit Dalvi’s Marathi play Gandhi Virudh Gandhi in 1995. Earlier, in 1989, the Maharashtra government had refused permission to stage the controversial Marathi play Mee Nathuram Godse Boltoi, written originally by Pradeep Dalvi in Gujarati. The play was staged in 1997 and the government banned it after just six shows. After its return to the stage in 2002, the play was a resounding commercial success across Maharashtra. Gandhi is seen through the lens of extreme rightist thought and shown to be responsible for Partition.

A more measured tone was struck by Premanand Gajvi, whose play Gandhi Ambedkar attempted to present the differences the two had, mainly over the vexed issue of the caste system. A play of ideas backed by eight years of careful research, it met with reasonable critical success but could run only for a few months in 1997.

Clearly the passage of time had liberated a section of Indian playwrights, allowing them to explore specific aspects of this multifaceted personality. These plays, which depicted Gandhi on stage as an actual historical figure, were followed by a wave of plays which idealized Gandhi. Perhaps this was inevitable, more so in the face of the commercial success of a play such as Mee Nathuram.

Playwright Ramu Ramanathan says part of the reason behind writing the heart-warming play Mahadevbhai was to correct the false propaganda about Gandhi that was being lapped up not only by adult audiences in Mumbai but also by the young. “The entire idea of Gandhi was being violated in more ways than one and I felt it was necessary to remind people about what Gandhi stood for," he says.

Since 2002, Mahadevbhai, directed by Ramanathan and performed by Jaimini Pathak, has had many shows across the country. Narrated by Mahadev Desai, secretary to Gandhi, it is based on the daily diary that Desai maintained. The play offers an intimate look at the Mahatma and has freedom fighters appearing in cameos and asides as ordinary humans, not superheroes. The play has been particularly successful with young students. “Most of them came backstage and thanked us for doing this show since they did not know this history," says Pathak. 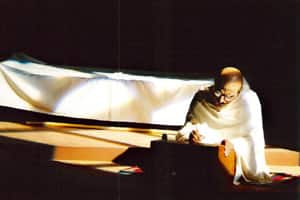 Sammy, a play on similar lines written by Pratap Sharma and directed by Lillette Dubey, makes use of all that is inspirational in Gandhi’s life and covers his political life, from his time in South Africa till his assassination.

Although plays such as Mahadevbhai idealize Gandhi and present only the entirely defensible aspects of the man, they do so without distorting history. This cannot be said of plays such as Mee Nathuram, a first-person account by Gandhi’s killer Nathuram Godse, which reveals a deep contempt for non-violence. In order to justify killing Gandhi, the playwright has doctored historical facts pertaining to the time before and just after Partition. Five hundred shows later, the success of the play is a testimony to the fact that hostility to Gandhi and his ideals continues, particularly in Maharashtra.

Audiences have also warmed to plays which are not antagonistic to Gandhi, such as Gandhi Virudh Gandhi, which shows him as a troubled family man, partly because these strike at the idea of the Mahatma being infallible. Gajvi, who spent eight years researching Gandhi Ambedkar, says his task was compounded by the fact that every time he read something new, he would also come across a contradictory reference. “I had to be very careful about the facts because I felt responsible for the followers of the two leaders," he says.

Although Gajvi’s research is thorough, the play often tilts towards Ambedkar. Ramdas Bhatkal, founder of the publishing company Popular Prakashan, is working on a doctoral thesis on Gandhi and has been researching the subject for a decade. He says that Gandhi tends to suffer in contemporary depictions as “knowing the facts about Gandhi is one thing and forming an understanding of him is another matter. He was essentially a great unifying force. Besides, a close look at his life provides more evidence than a reading of documented facts."

Perhaps it is significant then that of late there has been a resurgence of interest in Gandhi in theatre circles outside Maharashtra. Last year, New Delhi-based director M.K. Raina presented Stay Yet Awhile, a play which chronicled the correspondence between Gandhi and Tagore. The play had three actors reading out the letters, while video and documentary footage of the freedom movement was used as a backdrop.

Raina, who has since begun to script a play on Gandhi’s special relationship with children, was drawn to the humour and grace that marked the relationship between Tagore and Gandhi. “We are all so eager to hero-worship that we don’t realize that these two had serious differences. Besides, there is not a single issue on which Gandhi does not speak to us today. Everything he talked about has come back to hit us today," he says.

Therein lies the enduring idea of a leader who sought to fuse idealistic humanism with the pragmatic and political, even as he subjected himself to superhuman trials in the pursuit of truth. The plays based on his life have tended to take positions of intense hostility and deep admiration, and there is plenty of unexplored material which could lend itself to a more critical, nuanced and thoughtful representation in theatre.