Founded by traders in 1799, Pem is America’s oldest continually operating museum, with a vast collection of artefacts from South Asia, the oldest being a 2ft clay sculpture of the deity Balaram that was exported from Kolkata to Pem in 1800.

Today, Pem has one dedicated space for colonial period decorative art, another for traditional South Asian art ranging from Bengal’s clay sculptures to Tamil Nadu’s Thanjavur paintings. In 2001, the museum’s Indian collection received a major boost with the gift of the Chester and Davida Herwitz collection of modern masters such as M.F. Husain, S.H. Raza and Jogen Chowdhury. The Herwitz collection was amassed over the second half of the 20th century—the museum picked 1,300 artworks of 67 different artists from it. 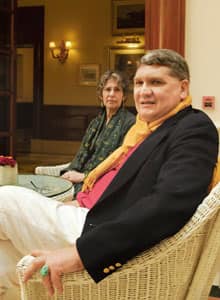 Monroe: The Pem’s South Asian collection is unique in the West for its focus on Indian art from the colonial times to the modern era. We make acquisitions through gifts and some purchases. That said, we also have extensive collections of American, Chinese, Japanese, African, Oceanic and Native American art. We recently acquired a 16-bedroom Qing dynasty house and reassembled it on our campus. Acquisition activities in contemporary Indian art have not been as great as they’re likely to be in the future.

You have been studying Indian museums as groundwork for a forthcoming travelling exhibition by Pem. Tell us a little more.

Bean: We plan on bringing select works from the Herwitz collection to India. In the 1990s, the couple lent their collection for exhibitions across America, UK and France, and that is really what led to a greater global recognition of Indian contemporary art, making prices soar as well. We think this is an opportune time to bring the collection to India and we’re looking at possible spaces to host the works.

After this recce, how do you think Indian art institutions measure up to their international counterparts?

Monroe: There is a great opportunity in India for the advancement of its museum community. Till this happens, it will be difficult for India to be fully a part of the global culture scenario. If one looks at how advancements have happened elsewhere, the model has been public and private partnership.

Is that the model you recommend for India?

Monroe: It’s a model that seems to have worked. Other models do exist but increasingly, museums in Europe and other parts of Asia are also pushing towards the American ideal of a public-private partnership for its cultural institutions. Even China’s marvellous Shanghai Museum relies on this sort of collaboration.

What are some of the more immediate solutions to resurrect the Indian museum scene?

Monroe: There are ways in which the government can provide support to the private sector to help them make investments in art and culture: Tax cuts, contribution of property, allowing for an independent system of governance while maintaining a broad control.

Bean: For instance, Korea’s national museum has private donors funding it in parts. We saw a brilliant exhibition of Chola bronzes at the National Museum in Delhi, but it could be so much better with a cutting-edge presentation format sponsored by a private or corporate donor.

Any promising trends that you’ve noticed?

Despite all the accolades, Indian art still has a very small share in the international art market. How does it measure up, say, against Chinese art?

Monroe: Anyone who has studied art markets over an extended period of time will conclude that the relationship between market share and quality is very low. Yes, Chinese art has a bigger market share right now, but I wouldn’t take that as a statement on the quality of artwork. The contemporary art scene functions with fads and fashions. India has produced extraordinary and cosmopolitan art in the last half-century and the nation should take great pride in it. It would be off the mark to make comparisons.