The Hyundai Elite i20 offers considerable space, new features and a smooth ride, while the Volkswagen Polo has a stronger engine

The battle of the hatchbacks

With the new Elite i20, car maker Hyundai wants to push its large hatchback into even more premium territory. At first glance, it certainly seems to have worked, as the all-new i20 appears larger and more upmarket.

Volkswagen too has recently updated its premium hatchback, the Polo. Though it’s not an all-new car like the Hyundai’s and the changes to the exterior and interior aren’t major, there has been one big update, and that’s an all-new diesel engine.

These are two of the best premium hatchbacks in the market, so let’s compare them and see which one comes out on top.

Parked alongside it, the Polo looks a little meek and understated, but some customers prefer such a design. There are, however, new head lamps, a bit more chrome on the front bumper, and new alloy wheels. It also looks half a size smaller than the Hyundai, thanks to how much the i20 has grown.

The first thing you notice in the new i20 is the space—it’s easily on a par with many mid-size
sedans. The rear seat has plenty of headroom or legroom, and the car is wide too, though the thick-side cushions do force passengers towards the centre. The dashboard is peppered with buttons, though it still looks neat and the quality is good —but not as good as the Volkswagen, which still sets the standard for cabin quality.

As we’ve come to expect from Hyundai, it’s also well equipped. Apart from segment standards like automatic climate control, a digital trip computer and Bluetooth, top-specification cars get a rear-view camera, a rear air-conditioner vent and 1 GB of onboard music storage.

The Polo is nearly as well equipped, getting all but those last three features, and adding an SD card reader. The rather staid dashboard design has been livened up by some silver trim and a smart-looking new steering wheel that lifts the ambience, and the material and build quality are good enough to belong in a more expensive car. Though the front seats are nice and supportive, the Polo really loses out in the rear seats. There isn’t a lot of knee- or shoulder-room, and it doesn’t even come close to the i20 on space.

On the practicality front, both cars have large boots (the Polo’s is a little larger), and while both have a lot of cubbyholes for front passengers, the Volkswagen doesn’t have much useable storage in the rear seat. 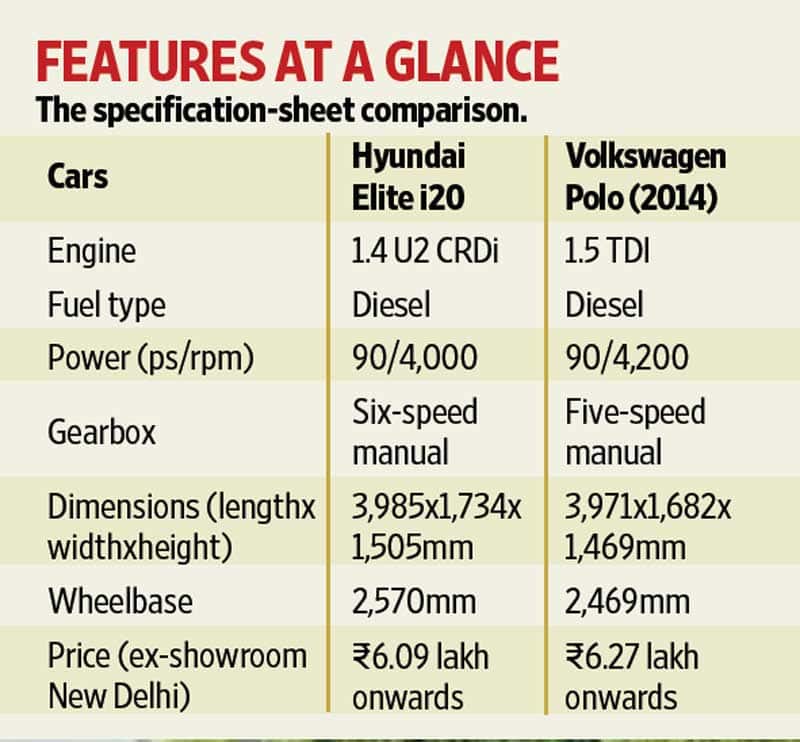 Both cars’ diesel engines produce 89 bhp of power, but they behave rather differently. The i20 uses the same 1.4 CRDi engine as before, and while it’s smooth and refined, it still feels a bit lethargic at low rev—you need to use the six-speed gearbox a lot to maintain good progress. Once you’re used to it, though, it’s a very easy car to drive.

The Polo’s 1.5 TDI engine doesn’t rev as smoothly as the i20’s but it delivers its power in a strong surge right from the word go. As a result, you’ll have to shift gears less often, and this ultimately makes driving the Volkswagen even easier. The engine is quiet at idle, but gets a little clattery as you rev it up. It’s a small price to pay, however, for a far more responsive drive.

The i20 has space, style and features but the Polo has more mechanical substance. The Volkswagen is a much better car to drive, both with its strong engine and competent ride and handling. The quality in the cabin is superb and it’s well equipped too. But the back seat is simply too small, and the design is a bit too plain at this price.

The i20 isn’t a fun car to drive and it’s the most expensive too. However, you just can’t ignore the huge amount of cabin space, the long equipment list, and the striking design—which is what most premium hatchback buyers will clearly gravitate to.