The shop around the corner

We came here, like the chinars, from Persia," says Mohamed Sadiq Wani, looking out of the window of his office, a wooden cabin in central Srinagar, at 40ft oriental plane trees. “We were one of the families that brought craft to Kashmir. Each was expert in a few designs; like the trees, they were imported but they survived and flourished and got beautiful here." 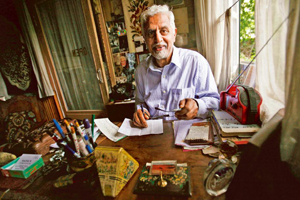 Wani sits at his desk, piled with papers and antique oddments, recounting the story of his ancestors, who travelled from modern-day Iran to the Kashmir Valley at the behest of first the 13th century Muslim saint Shah-i-Hamdan and then the 15th century emperor known as Badshah (Sultan Zain-ul-Abidin). “This was a beautiful place but poverty-stricken," he says. “There was a famine and no work, so Shah-i-Hamdan brought 70 or 80 artisans from Persia—painters, silversmiths, carpenters, carpet makers—to teach and employ the Kashmiris."

More than 600 years later, Wani’s family is one of Srinagar’s oldest and most respected handicrafts dynasties and still has some craftsmen working for it. The shop, Suffering Moses, started in 1840 by Wani’s great-grandfather, is one of the last surviving businesses run by the practitioners of the old craft, which, Wani says, is gradually being replaced by commercial work of lower quality. 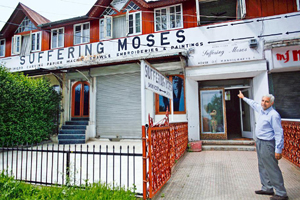 Wani’s showroom sits in a carefully tended garden of snowdrops, daffodils, irises and roses, depending on the season, all sheltered from the midsummer heat by the chinar trees for which Kashmir is famous. “They are my own air-conditioning system," Wani says. Inside, piles of fine embroidery are heaped over carvings of ancient walnut wood. Tissue-thin pashmina shawls hang next to shelves of filigreed silver work, papier mâché boxes and amber-glazed bowls. Although the pieces are mostly for sale, the four adjoining rooms that hold them have the atmosphere of a museum.

Kashmiri handicrafts are unlike their brighter, more boisterous cousins from other states. A combination of ancient Persian and colonial British influences, they feel delicate, faded, foreign; like artefacts from a lost civilization. If the store has the air of being frozen in time, it is because the techniques that are used to create the art it holds belong to an era that is fading fast. That is not to say that Kashmiri handicrafts have lost their appeal; expensive boutiques in Delhi, New York, London and the Gulf still buy embroidered pashminas and handpainted papier mâché work, but the bulk of commercial craft is now machine-produced in places like Ludhiana, Punjab.

Aside from Suffering Moses and a couple of other shops (Ganymede by Srinagar’s Third Bridge, for instance), there are few producers of the kind of work that existed 100 years ago. “The craft isn’t coming to an end," says Wani, “but the finer things are dying out." He predicts that in 10-20 years there will be few craftsmen of note left in Kashmir.

Consequently, there’s a sadness implicit in Wani’s grandiloquence as he shows off his treasures. “These are moonlight colours," he explains, holding a shawl of soft blues and greys. “Look at this one, it’s a Mughal design that the French copied, and it came to be known as paisley. Then here is hazara, which was called millefleurs. He shows an antique-looking shawl embroidered with stitches so tiny they might have been made by the industrious mice imagined by Beatrix Potter in The Tailor of Gloucester. “These are the Jamawar shawls. Look at some of the work!" His gaze strays to the petit point cushion covers. “Already we have lost these," he says, shaking his head, “and the chain stitch. All lost." 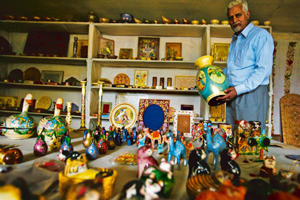 Wani isn’t always so gloomy. When he speaks of the history of craft, he becomes quite animated, his features elastic and expressive, with a mobile mouth that purses in concentration or disapproval. The artisans sent from Persia refined their techniques in their new home, he says, and by the time the British arrived in Kashmir, those crafts, along with the chinar saplings, had taken root. As foreigners, the British were prohibited from buying land in Kashmir (a rule that stands today), so they built their homes on the water. The young memsahibs, fleeing the heat of the Delhi summer, found craftsmen ready to decorate the interiors of their newly built houseboats, the most desirable of which were built along the famous bank of the Jhelum known as the bund, where Suffering Moses now stands, a white clapboard building with a painted sign suspended under a row of dormer windows looking out over the river.

“Everywhere the British came it was like their home," says Wani. “They built terraced gardens along the bund, everything so clean and neat." Wani is not an old man; he has young grandchildren at school in Delhi and he strides about the city in tweed and corduroy with a capacious, purposeful gait. But when he speaks of the past, he seems old. He peoples his descriptions of the city as it once was with characters who sound as if they have leapt from the pages of an E.M. Forster novel: Miss Mallinson, who ran the girls’ school, Miss Lodge the hairdresser, Mrs Blanco and Dame Edith Brown, who had houseboats along the fashionable bund.

These women, and their predecessors, had brought from their English drawing rooms a new set of embroidery skills which were absorbed into the local repertoire: crewel work, petit point, chain stitch. They wanted their furniture carved to simple European designs, dispensing with the elaborate Persian decorative work. Some stayed on well into the 1970s, living by the river. Then, with the conflict of the 1980s and 1990s, tourism stopped. In 2004, the terraces, which had become dilapidated over time, were remodelled by the government. A large concrete bank was built up to the road level, punctuated by empty flower beds, municipal railings and patches of scrubby lawn.

The name “Suffering Moses" was bestowed upon his great-grandfather by the British, Wani says, to acknowledge the pains he took for his craft—in the Bible, a Suffering Moses is a trope symbolizing sacrifice and loneliness. To pass on skills from father to son was an integral part of the tradition. Wani’s grandfather, Safdar Hussein, was a master painter and carver. His grandfather was a painter, his father a designer, and Wani himself chooses the colour schemes for new designs. But the technical knowledge is being watered down over the generations, he says. “My son only works in the shop, and my grandson is in Delhi getting educated. After 30 years, when he is ready to go into the business, who knows whether it will still be here?"

He gives the example of the family of a local master craftsman, a papier mâché painter called Mirza Ghulam Mohamed, known locally as Mirza mama. “He had trained with my father and was highly respected," Wani says. “One of his three sons did a PhD and one went into the tourism department. The third became a bank manager. When Mirza mama died, his art was also dead."

Mirza mama’s descendants may have moved away from tradition, but they flourished in other fields. One of his grandsons, Mirza Waheed, is an editor for BBC Urdu and author of The Collaborator, a novel about a young boy growing up during the militancy of the 1990s. Waheed says there are enough young people who still know the craft, but that the next generation may not take it up, as there are few incentives to learn and the work is not remunerative.

Kashmir’s ambivalent relationship with the rest of the country is mirrored in Wani’s reluctance to sell in the Capital; Suffering Moses does more business in New York and London than in Delhi. There was once an outlet in Connaught Place in New Delhi, Wani says, but it was burned down in the riots after Partition. “My father was very dejected," he says. “We never opened another one."

In a locked back room, where he keeps his treasures, Wani takes down the shop’s oldest artworks one by one, holding them up in the shafts of dusty light falling from a small window. “See this jade piece?" he asks, touching an exquisitely carved box. “This art is dead." A papier mâché bowl painted by his grandfather is brought down. Red and gold irises and bottle-green leaves glow from behind the glaze. It would have taken up to nine months to complete.

“Some people from a London museum asked if they could take a few things—a walnut screen of my grandfather’s," he says. “They offered me any money, but I told them, ‘No, I’m saving them, you see.’"