"storyDirectUrl"
OPEN APP
Home >Mint-lounge >Features >Up in the bend

Up in the bend

Why is the elusive Nilgiri tahr, found now only in pockets of south India, under constant stress?

A few years ago, a conservation project took a few of us to Valparai, a quaint hill town surrounded by tea and coffee estates, in Tamil Nadu’s Anamalai range. The undulating tea estates were on the ancient migratory routes of wild elephants and the project was meant to help mitigate human-pachyderm conflict in the area.

The uphill drive from Pollachi (near Coimbatore) to Valparai was steep, and we navigated almost 40 hairpin bends. They came in quick succession, enough to shake off early morning grogginess.

The view from the car was spectacular—vast vistas of rolling greens, which got better with every turn. At one of the turns, we spotted the Nilgiri tahr. It was the first time I saw one. It seemed to land suddenly on the road from the back of a cliff face, took a good look at our vehicle, which screeched to a halt, and crossed the road nonchalantly to hop off the kerb on the other side. By the time we reached the drop zone with the camera, it had disappeared. 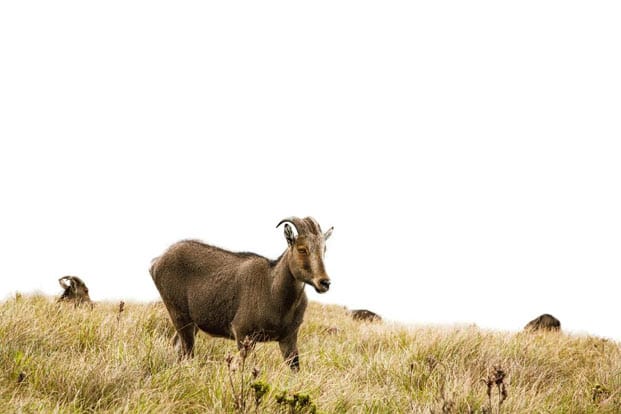 The tahr is usually extremely difficult to spot. It inhabits rock faces and cliffs at high elevations beyond the reach of roads and humans. If you want to be sure of spotting one, the Eravikulam National Park in Kerala has them in good numbers.

An endemic mountain ungulate, the Nilgiri tahr is found only in Tamil Nadu and Kerala—it’s among the 12 species that occur in India, and one of the tallest of all the Indian caprinae species.

In the Indian Wildlife (Protection) Act, 1972, the Nilgiri tahr is listed in Schedule I, which gives it special protection status. It is categorized as endangered in the International Union for Conservation of Nature (IUCN) Red List. A study by the World Wide Fund for Nature (WWF-India), released in September, estimates the population of the Nilgiri tahr in the Western Ghats at 3,122.

A few decades ago, the Nilgiri tahr could be found throughout the Western Ghats, the entire southern half of the Indian peninsula, including Karnataka. As late as 1954, it could be found at the Agumbe Ghat in Karnataka. Since then, however, its numbers have reduced considerably, with infrastructure development, agriculture, poaching and other activities leading to fragmentation and modification of habitat.

According to the WWF-India report, “Status And Distribution Of The Nilgiri Tahr In The Western Ghats, India", habitat specialists like the Nilgiri tahr, which are found in a small geographic range, are less likely to adapt to environmental change. So conservation strategies would require a good understanding of its distribution, population status, habitat connectivity, and an assessment of threats to its survival. The study has revealed 17 previously unrecorded smaller pockets of Nilgiri tahr habitat, totalling 131.

In 2010, a recovery plan for the Nilgiri tahr prepared by the Asia Biodiversity Conservation Trust and Care Earth Trust, Thrissur, Kerala, listed loss of habitat, degradation and fragmentation as the most important ecosystem-related conservation issues.

The word “tahr" (meaning wild goat in Nepalese) is attributed to goat-antelope-like mammals living on high mountain cliffs. There are three species of tahr—the Himalayan tahr, found across the Himalayan range; the Arabian tahr, found in the rocky Al Hajar range in Oman and the United Arab Emirates; and the Nilgiri tahr. All three tahrs were thought to be sub-species and were grouped under the genus Hemitragus in taxonomy.

In 2005, a molecular phylogenetic study by two scientists, Anne Ropiquet and Alexandre Hassanin, showed that all three tahrs evolved separately and had different lineages. They found that the three species are associated with three different genera: the Himalayan tahr with Capra (goat), Nilgiri tahr with Ovis (sheep), and Arabian tahr with Ammotragus lervia (Barbary sheep). These “unexpected results" led to the change in scientific name. The Nilgiri tahr, now mountain sheep, was no longer called Hemitragus hylocrius, it was renamed Nilgiritragus hylocrius.

It’s been a decade since Ropiquet and Hassanin shook things up in tahr taxonomy but the species continues to keep its goat tag, retaining its popular name.

The Nilgiri tahr was first described by British zoologist John Edward Gray on the basis of the drawings and notes of General Hardwicke, who served in British India from 1777-1823. In 1838, Irish naturalist William Ogilby first classified it as Kemas hylocrius. In 1859, English zoologist Edward Blyth put the Nilgiri tahr in the genus Hemitragus and named it Hemitragus hylocrius.

Surveys on the tahr’s precarious habitat are extremely difficult. Although a host of conservationists have studied the species over the past 50 years, a lot remains to be investigated. Annual monitoring of the population is only carried out in three places—Eravikulam in Kerala, the Nilgiris and Srivilliputhur in Tamil Nadu.

Conservationists believe the species has been under constant stress owing to numerous hydroelectric projects, timber felling and the monocultures of eucalyptus, wattle, pine and tea in the original grassland ecosystem of the Western Ghats. An example cited in the 2010 recovery plan says the Nilgiri tahr is no longer sighted in a particular area in the Kalakad-Mundanthurai Tiger Reserve owing to the invasion of lemon grass.

In the study, The Shrinking Ark: Patterns Of Large Mammal Extinctions In India, published in 2010, Krithi K. Karanth, James D. Nichols, K. Ullas Karanth, James E. Hines and Norman L. Christensen report that most large-bodied animals (above the body mass of 3kg), habitat specialists such as the tahr and similar rare species, face a higher probability of extinction. An adult Nilgiri tahr weighs around 100kg. The chances of extinction are higher for a smaller species like the Nilgiri tahr than larger mammals like the elephant, gaur or tiger. Tahrs are found in low numbers in threatened habitats. “In the context of India’s rapid economic growth and increasing aspirations of its growing human population, the negative impacts of many proposed development projects must be well understood before they are undertaken. Determining the factors that reduce species extinction probabilities is critical to successful conservation efforts," the study says.

Isolated in different groups and living in a fragmented habitat, the 3,122 existing tahrs have given some hope to conservationists. Eminent wildlife biologist and former dean at the Wildlife Institute of India, A. J. T. Johnsingh, who has tracked the Nilgiri tahr for over four decades, says it’s possible to have a population of at least 5,000 tahr in the Western Ghats.

Johnsingh suggests reintroducing the tahr in the Glenmorgan Mountains (the Singara range of the Nilgiris north forest division) and in the upper reaches of the Thirukurungudi range, the Kottangathatti-Kannunnie peaks (Kalakad-Mundanthurai Tiger Reserve). These locations have the potential to support 200-300 tahrs each.

The elusive animal we spotted walked the precipice in its sure-footed way and disappeared into one of its knife-edge bends. On our way back from Valparai, we met Johnsingh at his Bengaluru home to report our sighting.

The veteran biologist told us confidently that the tahr we had spotted was between the ninth and 10th hairpin bends.

Should the tahr get a sheep name after the change in its taxonomy? we asked. “Let it be called a tahr. Nilgiri sheep sounds too dull and lacks charisma," he said.

What’s in a name, as long as there are no poachers, livestock intrusion or uncontrolled forest fires, and regular assessment of the tahr population continues.