Forty years ago, I stepped onto the mythical Lakshman Jhula for the first time. Mythical, because Ram’s brother Lakshman is believed to have crossed the Ganga at this point over a jute rope bridge. It was also once the only way to Hindu pilgrim spots, Badrinath and Kedarnath. After crossing the precarious suspension bridge, I reached a winding footpath to Chaurasi Kutia (84 huts), Maharishi Mahesh Yogi’s ashram.

Memories of the ashram are some of the happiest from my days as a young journalist. They are also tinged with a bit of guilt. After all, the Maharishi gave me unfettered access, something that was not easily available to journalists at the time. But I considered his warmth and openness to be nothing more than a passport to what every journalist aspires for—a scoop. Maharishi himself was of secondary interest. The entire world’s interest was turned to John Lennon, Paul McCartney, George Harrison and Ringo Starr—the Beatles, in their quest of a new image: “holy singers from the hermitage!"

It all began in 1967. I was in my 20s, a cub reporter with The Statesman. As the year was drawing to a close, there appeared, one day, a single-column notice in the paper that the Beatles were coming to India to spend time at Maharishi Mahesh Yogi’s ashram. I sensed an opportunity and thought it might not be a bad idea to try and become the Maharishi’s disciple. It turned out he was in Delhi at the time, holding a camp at the Modern School campus—I went to see him. He was seated on a platform. I told him that I had problems—I had taken drugs and had even contemplated suicide. He grinned, and then whispered the secret mantra into my ear. I was meant to sit and chant it. The way I saw it, the Maharishi was friendly to me for two reasons: One, he was still relatively unknown and wanted some publicity. Two, I was a Muslim. That made me a rare and exotic disciple. 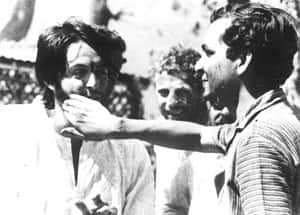 When The Beatles finally arrived, they seemed to be following their manager Brian Epstein’s (their manager till 1967) dictum—the more you keep the media at arm’s length, the more attention you get. Along with them came a gaggle of foreign celebrities, including Mike Love of the Beach Boys, Mia Farrow and her sister Prudence, and Scottish singer-songwriter Donovan.

I followed them to Rishikesh with my photographer colleague Raghu Rai, stopping at Roorkee. The Beatles had taken a break and dined at a hotel there, and its owner happened to be the brother of a friend. I duly noted down what they had eaten—paratha, aloo subzi, etc.—and their comments in the guest book about what a fine meal they had. I had my first Beatles story.

We drove past Haridwar to Rishikesh and camped there. Almost every newspaper in the world had sent their senior reporters. Not to much avail, though. The ashram was out of bounds for members of the media, said the sadhus manning the gates.

I approached one, whispered the magic words in his ears (“Jai Gurudev") and walked in. “You will not interact with the media till we tell you," said the sadhu. “The boys have come here to rest." I nodded my head in agreement and we walked on till I spotted the Maharishi under a tree with the Beatles. I promptly sneaked Raghu Rai in and he took a shot with the aid of his zoom lens. The Statesman had its scoop!

I kept going back to the ashram and introduced my friend, the poet Niaz Haider, to the Maharishi. I still recall how one time Niaz discussed Hindi and Urdu poetry with John Lennon.

All the Beatles were there with their partners. Lennon was the reclusive one and Starr was the friendliest. Paul would come and lie down in the Maharishi’s secretary Suresh Babu’s cabin and leaf through the copies of the Junior Statesman (a supplement of The Statesman in the 1960s) lying there.

All this time, I was filing my stories for The Statesman and my take on the Maharishi was not entirely reverential. After around 10 days or so, the inevitable happened and a copy of the Delhi edition of the paper made its way to Chaurasi Kutia with my byline. I was immediately banned from the ashram. Luckily, before I could be thrown in, I spotted the Maharishi walking in my direction, George Harrison by his side. I fell at his feet and implored that I be allowed to stay. I explained to him that since English was not my mother tongue, perhaps I had been unable to express my true sentiments in my writings. Harrison was listening, and didn’t seem entirely convinced. “Are you doing it for the story or are you doing it for devotion?" he asked me. To be on the safe side, I introduced my wife to the Maharishi and told him that she, too, wanted to learn at his feet. He relented, and I heaved a sigh of relief. The Maharishi used to give post-dinner lectures in a big hall and everyone would be there listening to him. To me, it all sounded like a lot of mumbo-jumbo.

Of the four Beatles who sat cross-legged, initiated into transcendental meditation by Maharishi, Harrison was the keenest. He also spent time learning the sitar. A young sitarist of meagre ability, and a tabla player, put him through the paces in what was called the “glass house", a circular dome at the edge of the ashram with a view of the Ganga in the distance.

It was around 30ft from the kuti (hut) where the Maharishi sat on a deerskin, regaling ashram dwellers with his wise cracks.

“Meaning, meaning, meaning," he would say, weaving the air with his fingers. “All search for meaning leads to hollows, hollows, where, alone, you delve into the interstellar spaces of the soul now trapped in your body." The more incomprehensible he became, the more rapturous the applause he got.

Then, with a jerk of the head, he would himself begin to chuckle, casting a benign eye on Paul McCartney, John Lennon and George Harrison, as if he pitied them for understanding nothing.

Suddenly Mia Farrow would walk in with a complaint. There were too many crows on the trees, disturbing Prudence Farrow, who was in the ninth day of her continuous meditation. Maharishi waved his hand stylishly. This had the effect of about a dozen sadhus appearing outside the Maharishi’s kuti.

“Kawwe bahut hai; khatam karo (too many crows; finish them)."

Next morning, the ashram looked like a hunting lodge. Sadhus stood guard on large trees holding stretched catapults to scare away the crows. All this, so Prudence Farrow could meditate endlessly.

The person most sceptical of the Maharishi, transcendental meditation, Chaurasi Kutia and what the Beatles were up to, was Ringo Starr, the Beatles drummer. Within a day of his arrival, he told me with considerable amusement, “It’s like a Butlin ’oliday camp" (Butlins were budget holiday resorts built in the UK and Ireland between the 1930s and 1960s). Starr left for London shortly after.

The apparent austerities of the ashram were sometimes a cover for marijuana smoking and possibly even drinking. Manager Suresh Babu’s bungalow was Mia Farrow’s smoking den. “Cigarettes only," Suresh Babu would say, winking at me.

Mike Love of the Beach Boys always referred to the Maharishi as the “giggling guru", a term which became famous later. The only Indian idol to take an interest in visiting the Maharishi at the time was Dev Anand. But before his visit could materialize, the heat of summer began to catch up with the ashramites. On Maharishi’s advice, the entire entourage left for Srinagar, for a sort of spiritual quarantine, before resuming their normal lives.

Harrison would often meditate in the Maharishi’s basement. Then he would walk across to the glass house for his sitar lessons. He could never stretch the strings to create the meend (bending the strings in a particular way to glide from one note to another). His was a staccato style of playing the notes of an Indian raga. This style comes through clearly in what became a famous Beatles number—Norwegian Wood.

Donovan, too, composed many songs on the guru. One I have not heard anyone play since then is:

Let the Maharishi lead you.There is only one thing to do"

Let the Maharishi lead you.There is only one thing to do"

Everyone joined the chorus:

Until a sadhu came from the direction of Prudence Farrow’s kuti with his fingers on his lips. “Shhhh", he whispered, “she is meditating."

(Saeed Naqvi is a journalist and a distinguished fellow at the Observer Research Foundation.)