Profile | Why everybody loves Vidya

Profile | Why everybody loves Vidya

The female security attendant stares at Vidya Balan’s bulging stomach as she steps out of her car at the ITC Grand Central hotel in Mumbai. Balan, hand on her stomach, looks the attendant in the eye, shyly, knowingly, apologetically, as if assuring her that the cushion that masquerades as a pregnancy bump is unlikely to set off the metal detector. As their eyes meet, Balan smiles, the attendant beams, while waving her through. 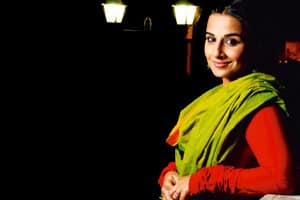 A long journey: Balan did commercials and a TV show before she got a break in Pradeep Sarkar’s Parineeta in 2005. Photo by Abhijit Bhatlekar/Mint.

Of late, she seems to be the only selling point of any film she does.

Balan’s rise into Hindi cinema’s top echelons seems more sudden than it is. Her career graph in the industry dates back to at least seven years but it’s only recently that a bunch of powerful roles have thrust her into a bracket that’s unique to her. It also puts her in a spot where opinion is divided on whether she is an exceptional or an overrated actor—a position easy to gain in an industry where Katrina Kaif gets nominated for an acting award.

The cause for debate is also because she does not fit into the conventions of the Hindi film heroine. She does not have a famous last name, does not shoot yoga videos, is at least a size 6, not nimble footed on the dance floor, is over the age of 30 and sucks at the so-called glamorous roles that require collagen and Western designer wear. For all practical purposes, she should not be a mainstream actor doing lead roles, for she defies every single requirement of a Hindi film heroine except for her stunning looks.

Yet, in the weeks leading up to the release of Kahaani, scheduled for 9 March, Balan is chased by reporters for interviews, adorns many magazine covers and on the day after this meeting, she says, there are 46 channels waiting to interview her.

So why is Vidya Balan, a postgraduate from Bombay University and raised in suburban Chembur, this season’s hottest Indian actor?

“She is an explosive talent who has not yet analysed her craft," says Milan Luthria, the director of The Dirty Picture. “She is extremely clever, has a high aptitude and is sharp. She is supremely talented, right up there with the best." 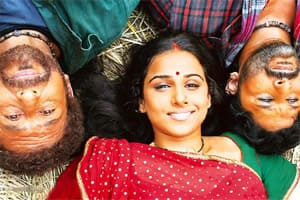 A wide range: Balan romanced an older and a younger man in Ishqiya.

“Going by the number of scripts I get, I don’t know why there is this myth that there aren’t women-centric films. Maybe that’s got a fillip with the The Dirty Picture and Jessica, which was the break point, like they call it in tennis," says Balan.

She occasionally curls up on a sofa in her room at the ITC Grand Central, tired from a day of walking around with the cushion, promoting the film, changing costumes, posing for pictures and giving interviews. She shakes her right leg continuously, does not once check her BlackBerry, looks straight at whoever she talks to, her deep, dark eyes as if probing for some meaningful answers.

“It’s a hopeful time for women in Indian cinema," she continues, her gaze unwavering. “Not only are those scripts being written, but they are also doing well because they are being made as entertaining and engaging films. Women are being humanized. You were either being glorified or demeaned (in the past). But there is a middle path today, reflective of the way society is evolving."

Her debut role itself was strong; as Lolita in the 2005 film Parineeta, she was forced to make complex choices on screen while dealing with clingy relatives and an indecisive lover. It was the sort of role that suits Balan, who has a vulnerability that’s offset by an inherent sensuality. A sequence of roles followed that did not necessarily challenge her as an actor or propel her career to great heights, though there was mixed commercial success.

Ironically, in a world where glamour sells more than anything, where heroines seem to be perpetually shot in front of a pedestal fan so their well-conditioned hair can flutter gloriously, Balan’s least memorable films have been ones in which she had to glam up—like Heyy Babyy and Kismat Konnection.

“I don’t think I suit it and it does not suit me," she says of those films, expressing no embarrassment or apology. “I am happy keeping away from it. Someone close to me once said I saw Lolita, Jhanvi, Silk, Sabrina and I saw two Vidya Balan films, Heyy Babyy and Kismat Konnection. There was a complete lack of conviction on my part. Just playing myself doesn’t excite me, which is why I thought I could sleepwalk through it. I couldn’t sleep or walk after that," she adds, laughing. 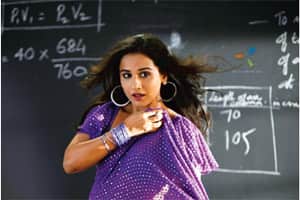 Balan was the central character in The Dirty Picture.

In the 2009 film Paa, she was the mother to a child (played by Bachchan) with an unusual disease. Ishqiya (2010) pitted her against Naseeruddin Shah and Arshad Warsi where, for the first time, she was not just a coy little villager. In No One Killed Jessica, she wore huge spectacles, shirts many sizes larger, slouched and shuffled as a perfect foil for the over-the-top Rani Mukherji.

Sujoy Ghosh, the director of Kahaani, explains how Balan added her own touch to the character of Bagchi as a means to understand her commitment. “For example, in the film, her character lands in Kolkata and goes to the police station to file a report. It’s simple enough. But the way she works is she asks me questions and forms her timeline. The girl stays in London, she must have started her journey one-and-a-half days ago, must have taken a taxi to the airport. She is a pregnant woman in an uncomfortable economy seat. Taxis in Kolkata are not the most comfortable either; so by the time she reaches the police station, she has been sitting on her bottom for 20-24 hours. So when she is sitting on that wooden chair, she shows that discomfort and fatigue."

“It would not be noticeable to the audience," he adds. 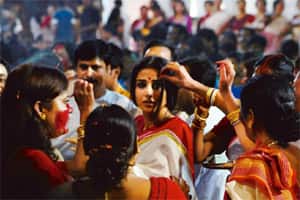 For The Dirty Picture, Balan added oodles of weight, showed six packs of fat through sleazy, midriff-exposing clothes while seducing three men of various ages on screen. It was the sort of preparation familiar in Hollywood and never attempted by a Hindi film actress, not required to do anything but look good.

“I have had my battles with the bulge, so to speak," says Balan, a constant tabloid victim for not being the conventional anorexic film star or a fashionably dressed one. “It’s been something I have dealt with for the longest time but it doesn’t bother me any more. If you feel desirable, then you can look it. People said I was the hottest in The Dirty Picture, where I put on 12kg. Indian bodies are curvaceous, we have certain features. There was this certain homogenization a while ago where everyone wanted to look like their Western counterparts. There’s nothing wrong with that, but I love Indian features, the Indian body. That homogenization is fading because even as people, India is coming into its own, whether in music, technology, arts or culture."

“I think the smartest thing she did," says film-maker Vidhu Vinod Chopra, “was to listen to her heart and not to give a damn that the world was trying to bring her down because of one wrong choice (fashion sense)."

The slow build up to her career—she screen-tested for almost six months before signing Parineeta—is also a consequence of the fact that she is neither a beauty contest winner nor has familial connections, two easy routes up in the Indian film industry, an incestuous conglomerate where a family name allows people to be themselves rather than characters they play on screen. The lack of any trappings of stardom allowed Balan to come into her own once challenging roles and fringe directors sought her out from a crowd.

“I think it (success) is sweeter because it’s taken so long, but it’s happened because I wanted it. I had it on my own terms and there is nothing more fulfilling than that," says Balan. What can illustrate the 33-year-old actor’s late start is Kareena Kapoor, who, for instance, has already spent over a decade in the acting business and is still only 31.

An advantage Balan has, and she also admits it after some thought, is that Hindi films have always been partial to actors from the south. From Padmini to Vyjayanthimala, Hema Malini, Jaya Prada, Rekha, Sridevi and Meenakshi Sheshadri, women with southern origins have ruled during their times. But here again is the difference—while most of them have been given to melodrama perpetuated by their trained dancer’s exaggerated expressions, Balan is an average dancer who underplays on screen.

“We go all over the world and retain a certain south Indian-ness about us. We are proud of our roots, which is great. It’s a combination of intelligent women who have lived life on their own terms, who have strength of character along with being good performers. We are very rooted, yaar," Balan says.

She pauses before training her piercing gaze again: “You have to work hard towards getting wherever… I am almost a sadist in the sense if something comes easy, I don’t enjoy it."

Love her, hate her 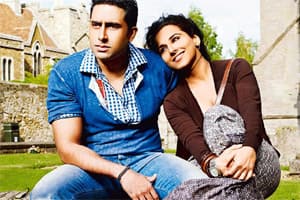 Balan was the mother of a child with progeria in Paa

The connection she makes with people, even in a few minutes, explains why everybody loves Vidya. “She is a lovely, lovely, girl… add lovely at least five times," says Aziz Mirza, her director in Kismat Konnection. “She is a fine actress because she is a good person."

“Not one note is repeated when she moves from one scene to the other," says Luthria.

Ghosh, who insists he would have made the film only with her, says he sees the movie three times every day. “I can find faults in my directing but not in her acting," he says.

Despite that, and to add to her bursting bag of myth-breaking virtues, Balan has not worked with a director more than once, which is unusual given film-makers’ penchant for “repeating" their favourite actors. Nor does she belong to what, in Bollywood parlance, is called a “camp". The only exception will be Raj Kumar Gupta, the director of Jessica, who will make her next film, Ghanchakkar, with Emraan Hashmi. She also has a lavani “item number" in the Chopra-produced upcoming Ferrari Ki Sawaari.

She says this independence allows her to be free of obligations. “It works fabulously because you don’t have to say yes to scripts you don’t like and no one is obliged to offer you something that won’t suit you. I love my independence and don’t feel disadvantaged by it."

She is not concerned either if the country’s best-known leading men will share screen space with her, considering none of the three Khans—Aamir, Shah Rukh and Salman—have acted with her. Balan’s last few male co-stars have been Shah, Warsi, Tusshar Kapoor and Hashmi, none of them capable of causing stampedes at the ticket counter.

Luthria explains her popularity, particularly with men: “She is uniquely Indian. She has the Khajuraho voluptuousness and a face that says take me home to your mother. It’s a heady mix."

But as the fan who took a picture and the security attendant who saw her dazzling smile would vouch, Balan has an inexplicable connection with the audience, whether in person or on screen.

She gets you, once those deep, dark eyes are locked in.