Thanks for Visiting Mint
You seem to have an Ad Blocker on. Please turn it off in order to continue, or whitelist Mint
HOW TO TURN OFF AD BLOCKER
OR
REFRESH IF YOU ALREADY TURNED OFF THE AD BLOCKER
Home >Mint-lounge >When your food sings to you

When your food sings to you

When your food sings to you

As we are introduced, Paul Pontallier, the legendary winemaker of Château Margaux, takes my hand, bends down…and kisses it—exactly like Elaine Sciolino describes in her book, La Seduction: How the French Play the Game of Life. I walk in prickly (more about that later) but by the time Pontallier releases my hand, I am charmed.

We are at The Leela Palace Bangalore to enjoy an evening of exceptional food and wine. Chef Alain Passard, who shocked the French establishment a decade ago by turning his three Michelin-star restaurant into a vegetarian’s paradise, has been flown down to offer a five-course, sit-down dinner with paired Margaux wines. Planning a pilgrimage to L’Arpège was on the bucket list of this lifelong vegetarian. Now, the mountain has come to Mohammed. I can hardly wait. A foodie friend has put together tables. Each of us has paid Rs15,000 for the evening—just for the chef and his food, not the wines, which are sponsored by Château Margaux, we are told. Will it be worth it? 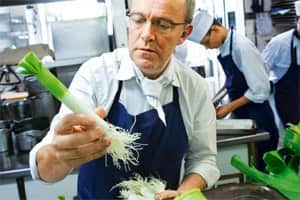 As fresh as it gets: Chef Alain Passard has a kitchen garden in France. Photo by Maurice Rougemont/Gamma-Rapho/Getty Images .

So why are the Margaux people here, throwing dinners in Delhi, Mumbai and Bangalore? The short—and sceptic’s—answer would be: to drive up prices. With a finite supply, they have to somehow increase demand for their subtle “feminine" wines. They hope to repeat with India what happened with China’s huge (and very lucrative) appetite for Bordeaux first-growths, especially since recession hit the US, turning its buyers away. Today, the Bordeaux wineries avidly court China’s purchasing power. Yet, there is a whiff of snobbishness. Château Beychevelle’s owner has said that the Chinese buy his wine because his logo looks like a dragon boat. Others talk about the Chinese buying only “show-off wines" without caring about vintages. The Chinese are “trophy chasers", snickers one collector in an amusing blog called Grapewallofchina.com. They mix lemonade with fine clarets, worry winemakers. The Chinese have the money but what do they know about wine, is the general sentiment.

The food that evening gives me the answer.

Alain Passard has a 2-hectare kitchen garden in France where he grows organic vegetables without the use of machinery. This is a man who reveres local, seasonal, organic food: a concept that has been embraced by every big Western chef. Dan Barber of Blue Hill Farm has taken the idea of farm-to-table quite literally by situating his award-winning restaurant inside his farm. Parisian star-chefs Eric Briffard, Pierre Gagnaire, Pascal Barbot and Sylvain Sendra, all work with a former boxer-turned-farmer, Asafumi Yamashita, who grows uber-pricey vegetables at his farm outside Paris. Yamashita has struck restaurants off his client list because the chefs didn’t treat his micro tomatoes, kabu turnips and tender spinach well.

In Seattle and Portland, restaurants list the name of the farmer on the menu, as in “Farmer Dan’s russet potatoes mashed with garlic". That may sound cutesy, but it is a nod to the person who produces the food on our plate.

Passard is one such chef. I had high hopes of him. But that night, he served us middling food. The first course was some root vegetables coated in Himalayan honey and candied lemon. I liked it, but my table-mate—a south Indian foodie who rides around on his Harley-Davidson and BMW motorbikes—didn’t. The second course had tomatoes in a blackberry sauce. Not life-altering fresh tomatoes, the kind that you find in the Hamptons in summer, but passable ones. The third course was red roasted onion stuffed with a hibiscus, red carrot and orange mousseline. Chef Madhu Krishnan of the ITC Gardenia, who was at our table, thought it marvellous. Simplicity personified, but hard to get right, she said.

It was downhill after that. The celery risotto with black Périgord truffles was stale, with nary a scent of truffles. When we dug into dessert, an avocado soufflé with undercooked pistachio and chocolate, my table-mate said, “Is this a joke?"

All through the evening, chef Passard came around the tables and socialized with the guests. He is a compact, genial man with an easy smile and a musician’s twinkle—he is the son of musicians.

Passard was my big culinary hope. As a vegetarian, I cannot hope to enjoy Réne Redzepi’s food at Noma—in Copenhagen, Denmark—now the world’s top restaurant. I have hung out inside chef Daniel Boulud’s kitchen in New York and know the care that chefs lavish on game, meat and seafood. Here, finally, was a chef who channelled that care and energy into vegetables, I thought. I was so eager to eat Passard’s food and have it sing to me. It didn’t.

The Margaux team may have wanted to woo us Indians, but the chef didn’t try too hard and it showed. I got the feeling we were condescended to.

So I have a message for Paul Pontallier: Come again to India with your subtle, amazing wines; but next time, dignify our palates by choosing a local chef for the meal. You’ll be surprised and so will we. As for chef Passard: Perhaps his cuisine only sings in La Paris. I may still have to make that trek to L’Arpège. I may not get a reservation after this account.

Slow food; great wine. As ideas go, this one is very seductive. Evolved cities like Vancouver, Oslo and New York manage to do this by growing vegetables on small plots of land in the middle of the city—somewhat akin to growing bhindi (okra) in a corner of Lodhi Garden, or growing tomatoes in Jogger’s Park. Is such local, seasonal and organic food possible in India? Yes, of course. But such an effort would make even Carlo Petrini, founder of the Slow Food movement, throw up his hands in theatrical despair.

Organic vegetables are available in India today but not widely. I have been ordering such vegetables from Adi Naturals in Bangalore through an Internet portal called Pristine Nature. They deliver weekly at my home. The prices are high but I bargained for that. Their quality is iffy and I am not sure they are organic. Local grains are also gaining ground, thanks to awareness and publicity (Lounge did a cover on such grains two weeks ago). I eat jowar rotis once a month, I buy unpolished rice and have made ragi mudde from millets at home. All through Indian cities are vacant plots of land waiting for vegetable gardens. City dwellers with a green thumb can turn these into something amazing. Dairy farmers thrive in our cities.

So yes, slow food is possible in India; but it’s not easy. Great wine in that sense is easier.

Shoba Narayan wonders if a woman can kiss a man’s hand; and why we don’t. Write to her at thegoodlife@livemint.com