Art holds great promise as an unconventional gift. Lounge curates artworks currently available in the market, from the outlandish to the orthodox, from the famous to those off-the-beaten track Serigraph, lithograph, oleograph, monotype are some of the media available for collectors who feel they have reached a post-canvas phase in their lives, where a piece of cloth stretched on a wooden frame fails to arouse any enthusiasm. Fret not. A set of four etchings by Anish Kapoor, better known for his gigantic sculptures, is in the market (pictured). Etching is a unique medium where a design is first drawn with a needle on a metal plate coated with acid-resistant wax. It is then placed in an acid bath, which eats into the design on the metal plate. The final steps involve rinsing, scrubbing away the wax, inking and printing the design on paper. To see Kapoor’s mind at work on such a scale and in such a medium, in contrast to grand pieces like Chicago’s Cloud Gate or Marsyas, changes our perception of the artist. Oleographs are, essentially, coloured lithographs resembling oil paintings. Lithographs, in simple terms, are produced by a laborious process that involves drawing on a chemically treated block of stone (lithos in Latin), which is processed, inked and then run through a high-pressure press with paper on top that takes its design. Raja Ravi Varma, “the father of Indian painting", produced many lithographs of his own works. Nine of these, signed by Varma and depicting Indian mythological figures like Vishnu-Garuda Wahan (pictured), Laxmi, Radha and Krishna are in the market. On 24 October, India-loving British artist Howard Hodgkin’s personal art collection will be up for sale at Sotheby’s London. Noted for his treasured Indian art collection, it includes De-Luxe Tailors by Bhupen Khakhar (pictured). A work from his “trade" series in which he paints barbers, watch-menders and so on, it was gifted to Hodgkin by Khakhar, whom he counted among his friends.

While talking of art in India today, one can hardly overlook the likes of Subodh Gupta and Vivan Sundaram. On 31 October, Saffronart’s Kochi Biennale Fundraiser Auction will sell works donated by 40 leading Indian artists, including Bharti Kher, Amrita Sher-Gil, Vivan Sundaram, Manisha Parekh and Subodh Gupta (pictured). With no buyer’s premium on the works, the entire sale amount will go towards supporting the biennale.

Emerging Indian artists are making some refreshing work and it won’t be long before we find the next pin-up faces of Indian contemporary art. Consider Nandan Ghiya from Rajasthan, born 1980, whose 22nd-century portrait series explores the effect of digital technology on the idea of “selfhood". The pixellated faces on old portraits superimposed with a blue screen makes us wonder which is the real “you" in this digital age—the Facebook “you" or the Twitter “you"? Mix it all up

A “mixed-media" work challenges our assumptions of what we might think belongs on a canvas. Oil paint? Surely. How about Sellotape, garbage or urine? When Andy Warhol invited his friends to urinate on copper paint laid on a canvas for his Oxidation paintings, any ideas of purity and old order went out of the window. But mixed media, when not done merely to provoke, can be engaging and a source of delight. Take Ranbir Kaleka’s Raja Ravi Varma In The House Of Levi (pictured), which fuses the East and the West by playfully planting Raja Ravi Varma’s Indian figures from various paintings among the Biblical characters of The Feast In The House Of Levi, Paolo Veronese’s iconic Renaissance work. The result is, by turns, irreverent and engaging. 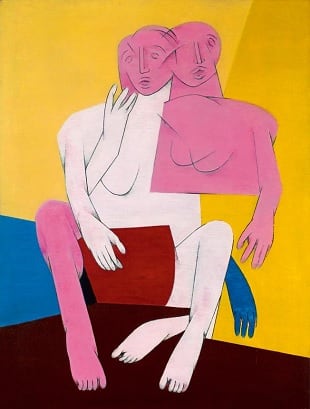 Mumbai-based auction house Pundole’s is holding an auction of modernist works on 6 December. It features a work from Ram Kumar’s iconic Benaras series (estimate Rs40-60 lakh), an oil painting by M.F. Husain in the Fauvist style (estimate Rs3-5 crore), a Jamini Roy tempera (estimate Rs6-8 lakh), and an oil by Tyeb Mehta (estimate Rs6-8 crore) (pictured), among others. With many stellar works, the auction has the potential to set new sale records.