The business of cards

The business of cards

When you hand a business card to someone, it either goes into a pocket and is forgotten or it holds the person’s attention for an extra second—it may evoke laughter or surprise but, most importantly, be remembered.

The humble 3x2-inch fellow is an extension of who you are. Everything from the content and design of the card to the way it is printed says something about your organization—and you. Because it is part of that all-important first impression, your organization and you should work to make it look good. And while Bluetooth, BlackBerry Pin or SMSes make it easy to get into people’s contact lists today, the tangible business card is not completely out of fashion. We found six types of concept-driven business cards that made us stop and notice them.

Delhi-based graphic and product designer Ishan Khosla decided to go minimal with his business card —he just has his name and a Web address on it. “I want my card to lead people to my home page on the Internet because that’s where my work is," says Khosla.

Another entrepreneur who uses his card to drive traffic to his website is Delhi-based Mayank Dhingra, co-founder of Dial-a-Book—an online book store. His business card gives his Web address, Facebook ID and Twitter handle. “A business card is a one-time contact. You cannot engage people with it much after that. But it is the entry point. Your online address allows for a continuous, ongoing interaction between your customers and you," says Dhingra. “We wanted the card to look young and casual—that’s why we went with the bright colours and sketches of Web icons like the ‘f’ for Facebook and ‘t’ for Twitter. The sketch of a phone and book pictorially describe the concept of the company," says Dhingra.

Talking about pictorial representations, many creative cards are the result of letting the cards speak for themselves. Hetal Ajmera, art director at advertising firm JWT, Mumbai, designed just such a visiting card for a cosmetic surgeon. “A doctor’s card is usually very basic, but Viral Desai (the surgeon) wanted something intelligent. So we decided to let his card illustrate what he does," says Ajmera. The card comes with a sleeve or translucent envelope. All you can see on it are a set of jumbled letters. It’s only when you slip the card out of the sleeve that the letters start falling into place and form the name and contact details of the surgeon, instantly and effectively describing the positive effects of plastic surgery.

Ajmera also designed a speech therapist’s business card, which was simply in the shape of a speech bubble. “Try to say more with the card than just giving out your contact information. At the same time, it is important to keep it simple and spontaneous so people make an instant connection," says Ajmera. 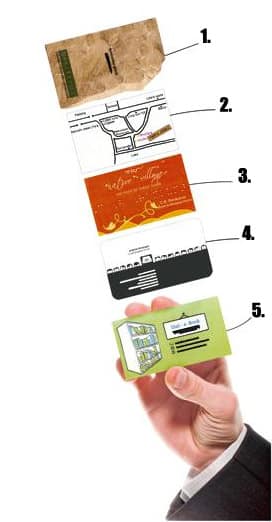 1. Card design and material can reflect the essence of the business; 2. If an office is difficult to locate, a map with directions can be useful; 3. Braille-enabled cards say a lot about your sensitivity towards the blind; 4. A card can express the character of your organization; 5. You can use a card as a one-point contact to your online life.

A non-profit initiative, Esha—People for the Blind, embosses your visiting cards with Braille for ₹ 1 a card. Nidhi Kaila, who runs the NGO, started the Braille visiting cards initiative in May 2006. “I knew about Braille-enabled visiting cards in foreign countries but didn’t know of any such initiative in India. I also realized that it is an expensive affair because Braillers, sort of typewriters that type in Braille, are expensive. But I wanted to keep the cost minimal as well as provide employment to as many people as possible," says Kaila. Esha outsources the embossing of cards to blind professionals who own Braillers. Each card is handcrafted, and the profits go directly to the blind. “When someone receives a Braille-enabled card, they are intrigued by the tiny embossed dots. It says a lot about your organization, you, and about your sensitivity towards the blind. More often than not when you give out your Braille-enabled card to someone, they will ask where you got it done from and get their own set printed. And if you happen to meet a blind person and give out your card, you obviously make a huge connect," says Kaila.

Many companies give their cards a local flavour.

In case your office is at a difficult-to-locate address, printing a map on the back of your card may be a good idea. Nestled in a compound in Zamrudpur, New Delhi, Zaza, a three-storey home store, stands out only once you get there—after crossing a maze of lanes and by-lanes. “When we were setting up Zaza in June 2008, we wanted to make sure that people find their way easily. Our designer Adil Bhatia suggested we put a map on the card, which makes it a cakewalk," says Christine E. Rai, owner of Zaza. It is the same with Purple Jungle, a store selling knick-knacks such as bags, pillowcases and stationery—all done in a kitsch style—in Hauz Khaz Village, New Delhi. The Village itself is a labyrinth dotted with interesting stores, galleries and restaurants, so it helps first-time visitors to find their way to Purple Jungle.

New Delhi-based DigiVaasi, an online creative house, has thumbnail caricatures of its 15 staff members on their business cards. The employee whose card it is has a larger pop-up caricature of himself/herself. As and when new people join and become permanent, more icons are added to the design template. Prabhat Bhatnagar, founder and creative director, DigiVaasi, says these are their online avatars. “Like there is Adivasi, we are ‘digital vaasi’ because we live in the digital age," says Bhatnagar. Funny and interesting, the cards draw you into marking the likeness between the caricatures and the employees. “The nature of our company is such that we like to express ourselves in a fun way. And business cards are the first point of contact, so it’s only logical to let them stand for who you are," says Bhatnagar.

THE FUTURE OF THE VISITING CARD The biggest advantage of a device like a Poken is that it is a convenient option for event organizers and networkers. For people putting together an event, Pokens can tell, at a quick glance, how many and who all are attending. For heavy networkers, it is an easy way to carry around information about a large number of people. Unfortunately, Poken only interfaces with other RFID devices, and those are not very common.