Thanks for Visiting Mint
You seem to have an Ad Blocker on. Please turn it off in order to continue, or whitelist Mint
HOW TO TURN OFF AD BLOCKER
OR
REFRESH IF YOU ALREADY TURNED OFF THE AD BLOCKER
Home >Mint-lounge >Features >Hedwigs in the hot seat

Hedwigs in the hot seat

Hedwigs in the hot seat

It was a strange request. A friend’s wife asked Abrar Ahmed to procure a white owl for her Harry Potter-theme party. “Theme parties are very fashionable now. She said, why use a thermocol owl when we can have the real thing?" says Ahmed, who has tracked the bird for some two decades.

Owls are the animal ambassadors of the Harry Potter franchise, making frequent appearances in books and movies as pets and messengers. The owls seen in the Harry Potter films cover a number of species, from Great Grey Owls (such as Errol, the Weasley family’s owl of choice in the books) to the tiny Eurasian Scops owls (such as Potter’s friend Ron Weasley’s pet owl Pigwidgeon). Potter’s own pet Hedwig is a Snowy Owl. 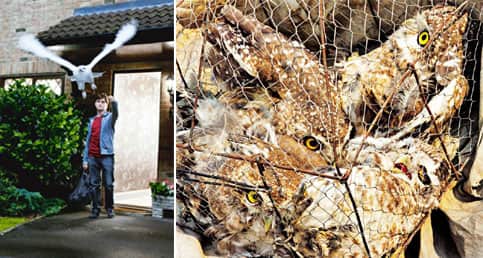 The books have reportedly boosted an interest in owning owls as pets, prompting Union environment minister Jairam Ramesh’s recent comment on 3 November, linking the dwindling population of owls in India to the fascination of the “urban middle-class" for gifting owls to children, who were fans of the franchise.

The Harry Potter films have, in the past, also faced criticism from animal groups for the tiny cages the birds are shown in.

Ramesh’s comment, at the release of a report by Ahmed on the nocturnal creatures, elicited a response from author J.K. Rowling the following day.

“There has been a spate of stories in the press recently concerning the upswing in popularity of keeping owls as pets, allegedly as a result of the Harry Potter books," Rowling wrote in a statement on her website, subsequently picked up by many blogs on the Internet. “If it is true that anybody has been influenced by my books to think that an owl would be happiest shut in a small cage and kept in a house, I would like to take this opportunity to say as forcefully as I can: please don’t."

The minister’s claim, however, seems to be a bit of an exaggeration. Ahmed says these nocturnal birds are not actually favoured as pets since they are carnivores, and feeding them can be a problem. They are also considered a bad omen culturally.

According to Imperiled Custodians of the Night, the report by Ahmed, traders have been dabbling in illegal smuggling of the birds to meet the demands of witch doctors and their like. The report was released by TRAFFIC India, an NGO working to end illegal wildlife trade, and work on it was funded by WWF and The Rufford Foundation.

Hunting happens, Ahmed says, because of trade in owl parts, such as bones, feathers and claws, and their use in sacrifices and rituals by witch doctors.

Ahmed has researched owls for nearly 20 years now, mingling with trappers, traders and black magic practitioners, who are the most frequent buyers of owl parts. He refused to be photographed for the story because a large chunk of his work is done undercover. According to his report, the sheer number of superstitions and traditions surrounding owls in India ensures that they are always in demand and attract a high premium. His research, which records more than a thousand owls belonging to at least 13 species, states that prices for owls have risen since 2002. Ahmed was reluctant to divulge exact details as he fears that would put a price on owls.

“The place owls occupy in the pecking order is very critical. Their removal from the ecosystem is more harmful because as predators of rodents and crop pests, owls regulate attack on crops," says Samir Sinha, head of TRAFFIC India.

Unluckily for the birds, owl parts are considered to have magical and curative properties. And owls are easier to trade because they don’t flutter or squawk in captivity and can go for long periods without food.

Bird trade was banned in India in 1991, but it continues illicitly. There are periodic spurts in the owl trade, because people look for lucky charms during festivals such as Diwali and Dussehra. “There is a superstition that on moonless nights such as Diwali night, owls can find hidden wealth. So from the poorest tribal to the wealthiest businessman, everyone is a potential customer," says Ahmed. He recalls a scene outside the courts in Ahmedabad a few years back, when bird parts, including owl parts, were sold as lucky charms for a favourable judgement.

Delhi used to be a hotbed of this business. Ahmed says tribals from Maharashtra would sell birds near Jama Masjid until three-four years ago. The report says that between 2003 and 2007, the maximum number of seizures were in Delhi, followed by Uttar Pradesh, West Bengal and Haryana.

In Ahmedabad, local birdwatchers say monitoring and enforcement have made some difference.

“A few years ago, owl claws and beaks were being sold in a few areas of the city like Teen Darwaja, Ellis Bridge and Kalupur. However, after strict action from authorities this trade has stopped," says Bakul Trivedi, an Ahmedabad-based veteran birdwatcher of three decades. The owl trade continues in some of Gujarat’s tribal areas, he says.

Overall, it would appear, there has been no real decline in the owl trade, except for areas in cities such as Delhi and Ahmedabad, where there has been greater monitoring and an increase in the number of seizures.

“Two years ago I happened to be in Dev Mogra village near Rajpipla taluka of Vadodara, where tribals were selling spotted owlets (locally known as chibri) at a village bazaar during Holi," Trivedi says.

Tejas Soni, a 25-year-old birdwatcher from Ahmedabad, says the owl trade is no longer a problem in his city at least. “I have heard that the illegal trade takes place in the villages located on the outskirts of the city where literacy levels are very low, and there is demand from buyers who indulge in tantrik rituals."

The involvement of the tribal poor in capturing owls makes a case for livelihood rehabilitation. But for now, superstition continues to be the biggest obstacle in completely eliminating such trade.

“The more progress we seem to make, the more vulnerable we seem to become. It is this need for shortcuts in life, believing that an owl sacrifice will bring wealth or will help you handle your boss, which fuels this crisis," says Sinha.

As for the Harry Potter party, Ahmed did go with three white owls, made of paper. It turned out that by the end of the party, the children had spotted a fourth one too: a real live owlet perched on the electric cables outside the house.

Soumitra Trivedi in Ahmedabad contributed to this story.