Sangeetha L, 12: Girl from the forest

Inside a classroom in the Adivasi belt of Gudalur, Tamil Nadu, a preteen eagerly hopes to rise above her circumstances

The morning assembly has ended and classes have begun at the Vidyodaya school in Gudalur, Tamil Nadu. Nursery rhymes are being recited along with animated gestures and peals of laughter. Math classes have begun for the older students.

In one of the rooms, a teacher is missing—she is on leave, we are told, and has assigned her class some work to finish in her absence. Little heads are bent over their math textbooks, solving sums on sheets of paper.

Dressed in a printed purple salwar-kameez, 12-year-old Sangeetha L., from class VII, is one of them.

“I like studying almost all the subjects," she says with a smile, “not math though."

But she works hard on math because education is important for her. Sangeetha is one of the few children from her community to have progressed this far academically. “I want to study and become someone big," says the petite girl, who belongs to the Kattunayakan community, a designated Scheduled Tribe of 1,629 people, according to the 2011 Census.

Originally a tribe of hunter-gatherers, the Kattunayakans live deep within the Nilgiri forests, feeding on what they manage to forage—berries, roots, fish, fowl and, most importantly, honey. As with most hunter-gatherer tribes, the Kattunayakans would wander across the forest from season to season, camping together until it was time to move again. “They were very much at home in the forest and led a lovely life there—there was plenty to eat, enough water to drink and swim in, fresh air," smiles B. Ramdas, co-founder and managing trustee of The Viswa Bharati Vidyodaya Trust.

Honey-gathering is their primary source of livelihood, or used to be before tea and coffee plantations fanned across the Nilgiri hills, destroying the forests they derived their sustenance from. “My father still collects and sells honey," says Sangeetha, who is from Mundakunnu village in Gudalur taluk. Honey-gathering is a seasonal job, so the rest of the time he does odd jobs for the local landlord and cultivates bananas on a small patch of land that he owns. Sangeetha’s mother is employed as a tea-picker at a local plantation.

“Their way of life began to get affected when the British started large-scale clearing of these forests, planting tea and coffee instead," says Ramdas. After independence, when the plantations were taken over by local landlords and the forests were declared national parks, they became trespassers on their own land. 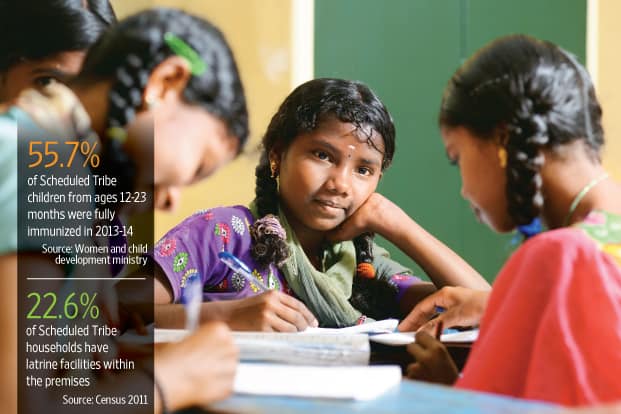 The Scheduled Tribes and Other Traditional Forest Dwellers (Recognition of Forest Rights) Act, 2006, recognizes that “the forest rights on ancestral land and their habitat were not completely recognized in the consolidation of the forest during the colonial period as well as in independent India, resulting in historical injustice to the forest-dwelling Scheduled Tribes and other forest dwellers who are integral to the very survival and sustainability of the forest eco-system".

According to the Act, which seeks to “recognize and vest the forest rights and occupation in forest land in forest dwelling Scheduled Tribes and other traditional forest dwellers who have been residing in forests for generations and whose rights could not be recorded", people who have lived in the forest for more than three generations should have complete access to it and are allowed to use its resources for their own non-commercial needs.

My parents have told me that I need to study and I take that very seriously NOW. Even if it is difficult, my motto in life is to try. - Sangeetha L.

The Kattunayakans, however, are often harassed by forest officials. “Urban environmentalists assume that nature and human beings are not connected, that animals must be preserved in their pristine separateness," says Ramdas, pointing out that these are ancient civilizations that have lived in harmony with nature for centuries. “But because their lobby is so weak, their access to the forest is getting curtailed," he says.

The state boundaries dividing the forests of the Nilgiris into Mudumalai, Bandipur or Wayanad make little sense to them, and they are struggling to survive and live the way they used to. “Because the Kattunayakans are hunter-gatherers, they neither own land nor know how to cultivate it for commercial purposes," Ramdas says, adding that they are now compelled to settle down in one spot.

Hence the need for the next generation to get some form of education. Most of the teachers at Vidyodaya are from the Adivasi community and the school itself offers a schooling system that tries to preserve the song, music, dance and customs of the children who attend. They try to incorporate all this with mainstream education so that the children learn skills that will help them negotiate a rapidly-changing world. “We do not expect them to leave behind their background and culture," says Ramdas.

A picture drawn by Sangeetha, printed on a calendar, hangs on a wall of the Gudalur guest house where we stayed. It depicts a dense forest, a river populated with fish and aquatic birds, a small colony of huts beside it, and the silhouette of the hills beyond. “This is a representation of my home," says Sangeetha.

But she lives there only during school vacations and festivals. For Sangeetha has been in a hostel since class 1—Vidyodaya is the third school she has attended so far.

Two of her four siblings attend school with her, and so do innumerable cousins. Her parents visit on weekends. She speaks five languages—her own dialect, the Paniya language, Tamil, English and Malayalam.

“She is very good with languages," says her teacher, Depala Rahul Kumar. “She wants to learn everything—games, dance, craft, sport, any subject. She is an all-rounder," he says.

Sangeetha says she enjoys the time she spends at school. “I get to meet so many people here," says the chirpy 12-year-old, who loves playing dodge-ball and frisbee, has learnt to crochet and made many friends.

But she doesn’t lose sight of why she is there. “My parents have told me that I need to study and I take that very seriously now," she says. She hopes to be a teacher one day and teach children in her village. “Even if it is difficult, my motto in life is to try," she says.

As is the case with all Adivasis, the road is not easy for her either. “Very few people from her community have finished schooling, let alone higher education," says Ramdas. The fact that she has chosen to continue so far is an encouraging sign. “Once these children go home for summer vacations, it is often a struggle to bring them back to school," he says. “She has chosen to come back of her own volition for the last three-four years," he adds. “There must be something she likes here."