Of all the sporting events in the world, few are as steeped in ritual and propriety as Wimbledon. Enter the rule-breakers

At Wimbledon, complex rules govern everything, from what players are allowed to wear to how female contestants are addressed by the chair umpires. The following exhilarating passage is from the Wikipedia entry for the tournament:

“The title ‘Mr’ is not used for male players who are professionals on scoreboards, but the prefix is retained for amateurs, although chair umpires refer to players as ‘Mr’ when they use the replay challenge. The chair umpire will say ‘Mr <surname> is challenging the call...’ and ‘Mr <surname> has X challenges remaining.’ However, the umpires still say Miss <surname> when announcing the score of the Ladies’ matches."

Electric stuff. This is not a tournament that takes to disruption gladly. Why, they’ve even had the same supplier of balls since 1902. Which is why there is a frisson of excitement whenever the catechism of the grass courts is violated by a player who refuses to play by the rules. And, over the years, Wimbledon has been blessed with several bad boys and mischievous misses.

Names such as John McEnroe and Goran Ivanisevic often come to mind. But rule-bending at Wimbledon has an illustrious history that goes back several decades.

In 1936, Fred Perry won the men’s championships, beating Nazi Germany’s Gottfried von Cramm. This is a famous victory for all the wrong reasons—there would not be another British champion until 2013. Perry, always considered something of a wholesome British champion, was not averse to some gentle gamesmanship. A biographer later revealed that Perry’s coach had hired several waiters and bellboys at the Savoy Hotel to report back on Cramm, who stayed at the famous establishment during the tournament. Which is how Perry may have learnt of Cramm’s groin strain, picked up in training. Perry demolished the genial German 6-1, 6-1, 6-0 in just 45 minutes—one of the most one-sided finals ever.

On court, however, Perry remained utterly respectable. Or did he? According to one report in The Scotsman, Perry played that entire match with the lining of his trouser pockets hanging out. Why? Because apparently the German was a stickler for proper accoutrement and the hanging fabric would have outraged his sensibilities. 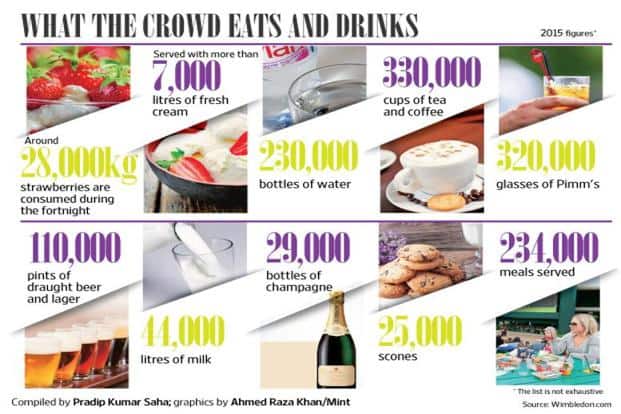 There is much less doubt about the on-field excesses of Jeff Tarango in 1995. During the third round at Wimbledon that year, Tarango got into an argument with French umpire Bruno Rebeuh, with Tarango ultimately callling Rebeuh “one of the most corrupt officials in the game". The American then stormed off. But things did not end there. Later, Tarango’s wife slapped Rebeuh across the face, twice. Game, set, disqualification.

In comparison, McEnroe’s tantrums seem almost benign. Yet the scintillating American will always be remembered for those four words he uttered at the umpire in 1981: “You cannot be serious." McEnroe’s rage was partly his reaction to what he thought were the outdated modes of Wimbledon. He once said: “To me, manners meant sleeping linesmen at Wimbledon, and bowing and curtseying to rich people with hereditary titles who didn’t pay any taxes."

Some three decades earlier, the elders at Wimbledon had been outraged not by what Australian Gussie Moran said but by what she wore—a short tennis skirt with frilly lace tennis panties. Outraged, the All England Lawn Tennis and Croquet Club admonished Moran for bringing “vulgarity and sin into tennis".

Which seems a bit harsh by today’s standards. Greg Rusedski, thankfully, left no room for misinterpretation. In 2003, the then British No.2 let a ball go after someone in the crowd shouted “Out". The umpire let Andy Roddick keep the point and the game. Incensed, Rusedski screamed at the umpire while sitting down: “F*****g ridiculous. Some wanker in the crowd changes the whole match and you allow it to happen. Well done, well done, well done. Absolutely s**t."

Then there is the grunting. If you thought accompanying tennis shots with full-throated expression of vocal effort was a new problem, think again. In the 1981 tournament, Jimmy Connors, no shrinking violet by any means, was asked to grunt less. Connors found it amusing. “I laughed when I heard that Wimbledon had tried to put a stop to grunting," he said. “I am grunting well this year, but I can’t help it." Which was fair enough.

But Connors didn’t stop there. Other people also grunt, he said, and named Brian Gottfried, McEnroe and—this is what drove everyone into a tizzy—Chris Evert. Evert, then married to John Lloyd, had once been engaged to Connors. The British had loved the couple before things fell apart. Evert was thoroughly embarrassed by Connors’ allegations. “Is that really what he said?" she asked the press in quite visible discomfort. Thankfully, McEnroe was on hand to bring things to a close amicably. “If an official actually told Connors to stop grunting, the official ought to be thrown out of Wimbledon." Oh, John. Never change.

But what if you’re thrown out of Wimbledon by your own country? In 1964, in what some called the first political controversy of the championship, the Soviet Union asked Alexander Metreveli to withdraw rather than play a South African. Hungary followed suit immediately and asked István Gulyás to call off his doubles partnership with Saffer Abe Segal. Nine years later, fortunately for Metreveli, he reached the Wimbledon finals, where he lost to the Czech Jon Kodeš. Mind you, 1973 was a controversial edition in itself. Dozens of players boycotted in response to Yugoslavia’s suspension of Nikola Pilic for allegedly refusing to play a Davis Cup tie. This included 13 of the 16 seeds.

In recent years, Wimbledon’s blinding white purity has rarely been sullied by such political and personal extravagance. But with hotheads such as Australia’s Nick Kyrgios in the running, one can only fondly hope to witness yet another explosive incident that will bring vulgarity and sin to tennis. Or, at least, some hanging trouser fabric. Anything. Please.