It began as a horrible holiday. Lucky for us, we were in Amritsar.

And if there’s one place where everything can go wrong and yet the world can still seem strangely right, it is this spiritual and cultural capital of Sikhism. And because the city’s showpiece, the Golden Temple, is open 24 hours, ultimately there’s little harm if the schedule doesn’t go according to plan. 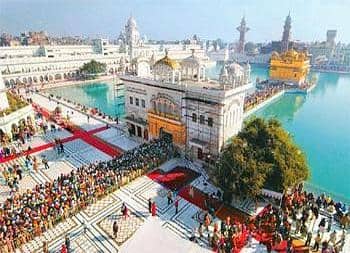 Majestic: At the Golden Temple, cleanliness is one expression of devotion. Narinder Nanu / AFP

See, we had a Plan. We were to make a day trip to Amritsar and then head to McLeodganj to satisfy one lover of hikes (my husband) and another of Buddha and the Dalai Lama (my father). We were to take a 6.40am train to arrive in Amritsar in time for a dhaba lunch, catch a quick glimpse of the Golden Temple and Jallianwala Bagh, watch the retreat ceremony at the Wagah border. And then drive straight to the hills.

Instead, by 6.42am, my BlackBerry had gone missing from my purse, just after we’d fought our way into the train and I’d had to grab my screaming daughter or risk losing her forever. In 30 seconds, I had lost the numbers of every car, taxi and hotel that we had booked.

The train was more than an hour late, pulling into Amritsar just before 3pm. We found a taxi driver willing to take us around the city for Rs600, which sounded like a bargain. He would be the umpteenth dampener on our Plan, though.

“Madam, you cannot tour the city now. If we don’t leave for Wagah now, you will miss the ceremony," he said. “I don’t believe him," I said to my husband. “He just doesn’t want to waste petrol."

So we did. The driver said a recommended joint would be too crowded and suggested we eat along the way. When he pulled into an empty parking lot attached to a water park, I groaned. But the succulent Patiala chicken, the crisp naans and a creamy dal makhni shut me up (for the record, the restaurant’s name is Waves, and it is just a few kilometres before Wagah).

By the time we arrived at Wagah at 5pm, the crowds had gathered. To the strains of Rang de Basanti, we found seats to watch the action. The sight was at once comical and emotional. The soldiers were decked out in boots, suits and feathers, and my daughter and I would go on to copy their goose stepping that night to giggles. The Indian side was a sea of pomp and patriotism; the Pakistani side an ocean of austerity and men in white.

Their guy with the mike who said “Jiye jiye" to the crowd’s “Pakistan!" was deep-throated and dignified. Ours was less military, more deejay: “Hindustan!" he’d squeak to our roaring “zindabad!"

I just didn’t expect to get so emotional over the whole thing.

“That’s where Dadi was born. It’s where Dadu was born," I told my daughter about my in-laws. “It’s where Saba aunty comes from."

A million images of the way Pakistan has been a part of my life flashed through my mind. The day we filed for our marriage certificate, and my husband was asked his parents’ birthplace. He said, “India." And then corrected himself, “Pakistan." The New Jersey clerk sighed. “You don’t know where your parents were born?"

“Lady, even they don’t know the answer to that," I snapped back.

On the border, those questions and emotions grow increasingly complex. They can crescendo into louder chants of “zindabad" and more flag-waving or, if you are like me, into quiet appreciation of how our raucous party and their stoic celebration can co-exist.

From Wagah, I made the driver speed back to the city, fearful that Jallianwala Bagh would close. We got there just in time, the darkness even making the place seem holy. My daughter was amazed at how General Dyer got his troops in through such narrow spaces. We peered down the well from which 120 bodies were reported to have been retrieved. Few others were around—a shame, because the place is lit up beautifully, yet eerily, in a fitting tribute.

Before we had even made it to the Golden Temple—really the reason to visit Amritsar—everyone was dragging. After resting in bargain rooms (Rs300 at the NRI guest house across the temple), we headed to the temple at 9pm.

We had really saved the best for last. As soon as you wash your feet and walk up the steps to catch a glimpse of the gold, you cross a threshold from the ordinary to the majestic. At night, the dome is reflected in the waters, which dance and sway and give the whole place a surreal feel.

But the best part about visiting the temple at night is that there are no lines and few outsiders (read non-Sikhs). It is a glimpse of cleanliness and pure devotion, and how the two have everything to do with each other. Sikhs scrub the marble floors at midnight. More dangle from the bejewelled chandeliers inside, dusting. The whole place smells of Brasso. It is divine.

We opted for the langar (free kitchen at temples), which the husband initially resisted. He wanted the dhaba. My thrifty father told him to give it a shot. Papa ate five rotis, husband ate six, I had two, daughter had one. The pickle and the kadha prasad were fabulous. Stuffed, we rolled back to the hotel.

We woke at 5am to catch our hired taxi to McLeodganj—one that would stand us up. We tided over the delay with chole bhature, paneer parathas and steaming cups of coffee at Bubby Vaishno Dhaba. Unbeknown to us at the time, our holiday of errors would only continue: The next driver would have no insurance and would get ticketed on the Punjab-Himachal Pradesh border. A flat tyre would leave us stranded. The train back would be 5 hours late.

We looked on the bright side as we waited. The lag allowed us to walk over and view the temple in the daylight, after all.

Every cloud has a silver lining, the saying goes. In Amritsar, ours glistened in gold.