Thanks for Visiting Mint
You seem to have an Ad Blocker on. Please turn it off in order to continue, or whitelist Mint
HOW TO TURN OFF AD BLOCKER
OR
REFRESH IF YOU ALREADY TURNED OFF THE AD BLOCKER
Home >Mint-lounge >Features >Texting at the speed of light

Texting at the speed of light

Texting at the speed of light

The world record time is 25.94 seconds, held by 27-year-old Melissa Thompson of the UK.

The challenge reads as follows: “The razor-toothed piranhas of the genera Serrasalmus and Pygocentrus are the most ferocious freshwater fish in the world. In reality they seldom attack a human." 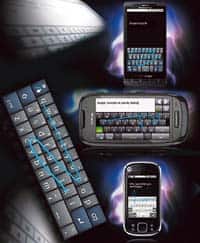 Key point: From keyboard to touch screen, technology has come a long way.

One would imagine that the fastest time was achieved with a tiny mobile keyboard (like those seen on a Nokia E series phone or a BlackBerry), but the record so far has been set with Swype (www.swype.com), a technology for mobile phones where you make sweeping gestures across a touch-screen keyboard, stopping at letters of interest. To type “penguin", for example, you start at the letter P and glide your hand across to E, mark a sharp turn towards N, and trace a circle touching G, U, I and the second N.

The problem of how to type efficiently on a tiny device has occupied engineers, designers and computer scientists for nearly two decades now. The good old Qwerty keyboard requires more than 50 individual buttons to cover the English alphabet and its myriad symbols, space clearly not available on mobile phones. Initially, we had the letters laid out alphabetically on the numeric keypad, with a single button standing in for three or more letters. Tap once for “a", twice for “b". Then came the omnipresent T9 in the early 1990s, among the first “predictive text" systems that attempted to anticipate what people were typing out. T9 did away with clunky multi-taps—you pressed the keys that contained your letters, and the system gave you a list of possible words. It was faster, and with training, quite accurate.

T9 was introduced around the time the first wave of PDAs (personal digital assistants) were hitting the market with their ancient touch screens and rudimentary handwriting recognition. The PDAs have not survived, but touch screens have made a triumphant return as the design du jour for mobile phones.

This has led to a number of competing points of view on how best to type on a small device. There are the physical keyboards—a number of smartphones have slideout keyboards underneath a touch screen, like the new BlackBerry Torch or Motorola’s Milestone. Then there are the systems that use only the touch screen— onscreen keyboards that you tap on, for example. These are now being modified in clever ways—Android app ThickButtons (http://www.thickbuttons.com/), for example, changes the relative size of the onscreen keys depending on what you’re typing.

There is also the fascinating Panini Keypad (www.paninikeypad.com), which attempts predictive typing in 11 Indian languages based on a standard numeric keypad layout.

Then there are the truly bizarre, like 8pen (www.the8pen.com), which relies on a complex system of “quadrants" and letter arrangements, and has a steep learning curve (but it’s free, so why not?).

Handwriting-recognition systems are also popular. They’re central to typing in languages other than English—keyboards based on Indian languages, for example, are rare, and handwriting programs are easy to implement when the number of characters in the language is large, clever workarounds like the Panini Keypad notwithstanding. A number of projects for Android have been started to allow typing in Hindi and Tamil, though their status is unknown. But with touch screens finding favour, it won’t be long before you can type out your emails on-the-go in Devanagiri. Would Guinness allow a translated version of that sentence to be eligible for the record?