The Rolls-Royce of cakes

The Rolls-Royce of cakes

It is usually made with a variety of dry fruits, soaked in brandy, rum, red wine and even vodka. It can be made with marzipan or not. Nuts are optional. And sometimes, it is an expletive, as in, “What a fruitcake!" It is, of course, the common Christmas cake. But this isn’t a mere cake. Oh, no. It is the taste of tradition; a peck of nostalgia; the touchstone being your mother’s cake—the Rolls-Royce ar households—mine included—today is the day for fruit cake, eggnog, plum puddigainst which all other cakes are measured and fall short. In Christian and otheng, mulled wine, stollen, and Santa. Merry Christmas, everyone!

It may be particularly heretical to ask this today but are Christmas cakes an acquired taste—like sushi and wine? Do children love Christmas cake at first shot, or do they learn to love it because they associate it with happy memories, family, festive cheer, and lots of goodies? My problem with plum cakes is that they have too much fruit. I imagine, kids would feel the same way. Christmas cakes could, very easily, fall in the same category of sweets that we all eat on festive occasions out of obligation. Take the til ka laddu that Maharashtrians make for Sankranti. Or the pori urundai that Tamilians make for Karthigai Deepam. This is a sticky rice ball, made with puffed rice, jaggery and get this, dried ginger. Who puts ginger in a sweet? The rationale of festive cuisine is to complement the season. You eat sesame sweets in winter because they are warming, and dried ginger for digestion. I am sure plum cakes have a similar rationale but I cannot put my finger on it. 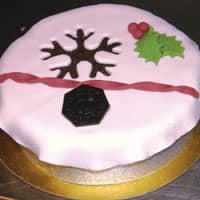 Pinto gets his cakes from Harrods or Fortnum & Mason during trips to London and freezes them. He also orders cakes from Bangalore’s Michelle Gafoor (michelle.gafoor@gmail.com), who charges Rs450 for her moist 1kg plum cake.

Lily Paul, who works in education, buys hers from Ann’s Bakery in Palai, Kerala; or Kottayam’s Omana Paul, retailed in Bangalore by Jani (080-22212441; Rs410 for a 1kg rich plum cake). Can I mention these as your recommendations, I ask Paul as we are about to hang up. “Yes, but please don’t forget to mention that I make my own cake," she replies quickly.

There you have it. Christmas cake is a homemaker’s pride. Paul is an intelligent, articulate, well-travelled and thoughtful woman. And yet, one measure of her self-worth is the girth of her cake. Don’t we all? Every talented super-woman I know has one dish (or more) that she is proud of. It isn’t just a dish; it is part of her identity. Kavita’s chaat; Annie’s bread; Aunty Ria’s mithai. A woman measures herself in many ways: the shade of her lipstick, the quickness of her wit, the number of zeros in her salary cheque; the height of her heels; and the moistness of her cake. Secret recipes passed down the generations, sharing cake, a bit of womanly pride. Isn’t that what the holidays are about?

Anurag Barthwal, pastry chef at The Oberoi Bangalore, is well aware of the weight of this tradition. You know, he says ruefully, there are so many creative trends in the culinary world. There’s molecular gastronomy and slow food. You could do so much to a cake; but as far as the Christmas cake goes, we don’t dare mess with the recipe. For Barthwal, as with other pastry chefs who end up making about 1,500kg of Christmas cake during the season, the art lies in the consistency. “We fuss over the fruit like a winemaker fusses over his vines," he says. They begin soaking the dry fruits in October and roll out the cakes in December.

If you can’t mess with the recipe, you mess with the marketing. The ITC Royal Gardenia tried that this season with a measure of success. They invited whoever they invite to these cake-mixing events that five-star hotels do; except with a twist. You bid for a cake and donate the money to charity. Yeah, right, I thought. That’s going to fly. Turns out, eight people bid and won the cakes and the hotel donated the money to their favourite charities. I wasn’t there, but that’s what chef Madhu Krishnan told me. According to the Gardenia’s pastry chef, Arvind Prasad, they have fudged around with fudge and macaroons this year. Their cakes, however, follow traditional recipes. They grind and sieve spices such as mace, candied ginger, star anise, cinnamon and cardamom and soak the spices along with the dried fruits “so that the spice flavours meld with the fruit". Most places let the cakes sit for a week or two after baking and dip them in brandy a day or two before serving.

The words most often used to describe Christmas cake are “firm" and “moist". Both terms are deceptive. Sure, the cakes look firm and moist. But cut a slice and they crumble from the weight of the stuff that is stuffed into them. Minimalism has its place but it certainly is not inside a Christmas cake. I eat mine with hot toddy.

Shoba Narayan is yet to meet a Christmas cake that she cannot live without.