Home / Mint-lounge / Features /  Angkor Thom, Cambodia | Facing up to the past
Back
Share Via

Angkor Thom, Cambodia | Facing up to the past

“Today we will explore the buildings built by J7," our tour guide Sophai Cham says as he ushers us into a tuk-tuk.

I look quizzically at Sophai. “We affectionately refer to Jayavarman VII as J7," he says. With a pause to allow us to chuckle, he adds, “…and we call Jayavarman II as J2, Jayavarman VIII as J8, and so on."

Jayavarman VII, I learn, was the 12th century ruler of Cambodia who had built the city we are exploring, some 7km from the provincial capital of Siem Reap. My curiosity gives way to amusement and I laugh, though I can’t help feeling disappointed that a YouTube channel of J7’s Khmer rap doesn’t exist after all.

Statues holding the body of a seven-headed naga (serpent) stand on either side of me. Where have I seen them before? Of course, this is a depiction of the churning of the ocean of milk (the Samudra Manthan), a story I have heard many times from my grandfather while growing up. The devas (gods) to my left smile, whereas the asuras (demons) to my right frown and grimace. I am thrilled to see this childhood memory come alive in this unlikely place.

But many of these statues lack heads and limbs. They have been plundered by local smugglers over the years and sold to international art collectors, Sophai tells us. I’m saddened to see this representation of one of my favourite mythological stories ravaged in this way.

As we walk towards the temple, a posse of about 30 photographers stands in front of the temple pond, bodies twisted in contorted poses, as they attempt to fit the temple and its reflection into their frames.

A giant tower stands in the centre of the temple in front of us, surrounded by towers of decreasing height. The structure represents Mt Meru, the centre of the universe in Hindu and Buddhist mythology, Sophai tells us. I am transported back to my Sanskrit class in school where I’d first heard the story of this mountain. The moat we had seen is symbolic of the cosmic ocean that surrounds the mythical Mt Meru, he adds.

I marvel at J7’s carefully thought out and executed plan which implied that the Bayon temple was the centre of the universe—and that J7 was its overlord.

“When J8 looked at the Bayon temple, he was confused. The faces looked so much like his brother’s that he could not bring himself to destroy them," Sophai tells us. The faces were intended to be images of not only the Avalokitesvara, but also of J7, who had had them made in his own image. And so the Bayon survived, even though many of the other Buddhist symbols in the city did not.

To reach the outer gallery of the temple with intricate bas-reliefs of scenes of battle and everyday life, I place my feet sideways on the narrow steps of the staircase and walk up.

“To reach God you have to do a little hard work," Sophai says, grinning. He tells us the steps are made in this way so that visitors can descend the library’s steps without “showing your back to God".

The inner gallery, a level higher, showcases carvings of gods from Hindu mythology—Shiva, Vishnu, even Ravana—and figurines of Hindu ascetics. Some of the carvings depict Hindu gods wrestling serpents and kings holding court. It’s time for another nostalgia-attack. I am instantly reminded of the panels in Amar Chitra Katha stories I had pored over as a child—these look like distorted black and white versions of those panels. 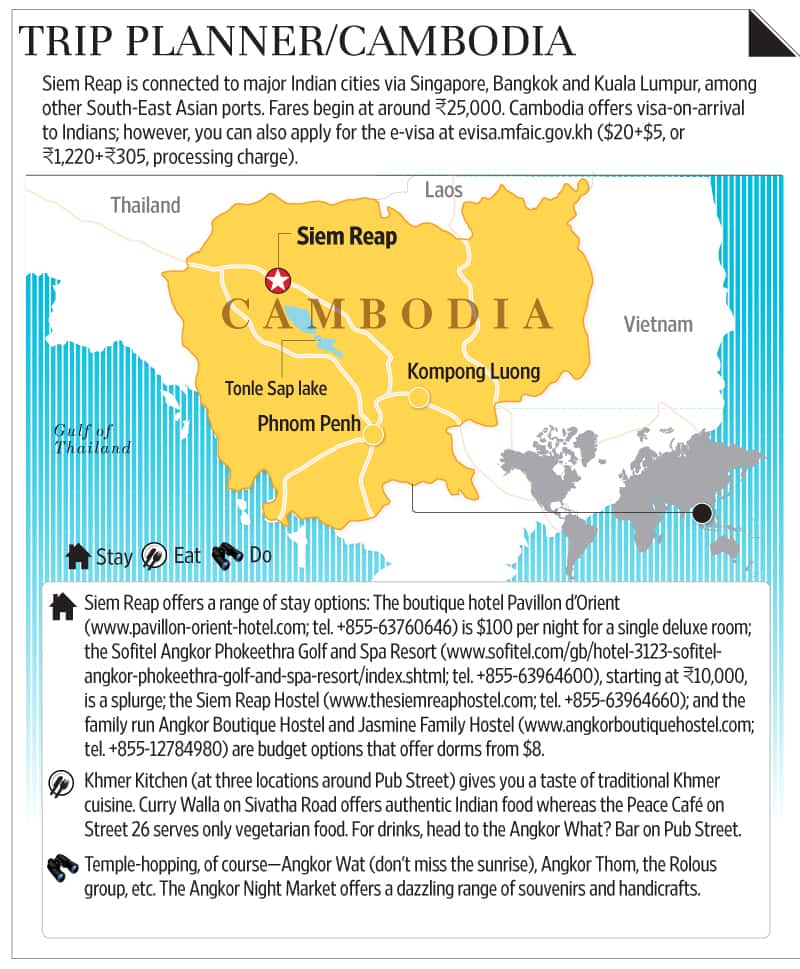 “One stone out of place and the whole statue crumbles," Sophai says. I immediately have a vision of the faces crashing down, like a pile of Jenga tiles.

If J7’s intention while carving the faces of the Bayon in likeness to his own was to perceive himself as a devaraja or god-king, he certainly achieved it, because I feel a wave of reverence wash over me as I sit down on a bench, taking in the “I-know-something-you-don’t" smile on the faces. Perhaps, if I stay and stare long enough, one of them might open its eyes and speak to me.

Ramya Sriram is a cartoonist, editor and writer based in Hyderabad. She draws comics at The Tap and loves long train journeys.