‘My blood group is B+ and that’s my motto’

He plays the upright cop Dev Pratap Sharma in Mani Ratnam’s Hindi film Raavan, then makes the personality switch in the Tamil version, Raavanan, as the cruel outlaw Veera. Luckily, Vikram Kennedy, better known as just Vikram, says he enjoys being “chameleon-like". The star, who made it big with Tamil blockbusters such as Gemini, Dhool, Sethu, Pithamagan and Anniyan has been described as “stepping into Bollywood at age 44". He grimaces at the idea. “It’s just a different language. And if you see, all superstars here (Shah Rukh Khan, Aamir Khan, Salman Khan) are my age." 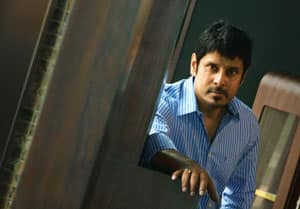 Two hats: Vikram plays the villain in the Tamil film and the good cop in the Hindi version. Shriya Patil Shinde/Mint

How does it feel acting in your first Hindi film?

It’s intoxicating. I probably would have felt the same if I had just done my first Oriya or Bengali film. What’s exciting is that with Hindi I reach out to a much wider audience.

‘Anniyan’, directed by Shankar, was dubbed in Hindi and released as ‘Aparichit’, but made no waves. Were you disappointed?

No, because Anniyan was a roaring success. I didn’t know that it was going to be dubbed in Hindi. Yet Aparichit had so many shows in Bihar, Bengal and Punjab. When I was shooting Raavan at Orchha, Madhya Pradesh, the driver assigned to me looked at me and asked, “Aparichit?" He said that he had seen it over 100 times when it played on television; he even introduced me to his mom! But Raavan, of course, is a different platform. Mani Ratnam, the banner, the hype all adds up here.

How did you feel when Mani Ratnam offered you both roles?

It was so challenging. We shot both versions together. At first, I took about 45 minutes to change. By the end, I was in my next get-up with different wounds in less than 9 minutes!

Did you discuss Veera’s character with Abhishek Bachchan, who plays it in ‘Raavan’?

I never watched Abhishek perform Beera when I wasn’t in the same scene, even though Mani sir asked me to a couple of times. I wanted to be original. This isn’t strictly Ramayan or just Raavan’s story. Veera keeps changing. Is he a poet, singer, womanizer, free spirit? (Laughs) I just go where the emotions take me.

You’ve played characters before with mental conditions. Split personality in ‘Anniyan’, disturbed in ‘Sethu’, autistic in ‘Pithamagan’ and now, complex in ‘Raavanan’. What’s the real Vikram like?

(Puts his hands up, makes a crazy face, laughs) No one has seen the real me in my films. I remember after Sethu released, a rickshaw driver in Chennai chased after me, shouting, “Thalaivaa (leader)!" When he caught up, he was disappointed. “But you’re so normal," he said. I guess he vibed more with the tough guy in Sethu. In real life, I joke around constantly. My friends ask me to play that on screen, but I prefer what’s far removed from me.

In Chennai, you’re chased around…

Yes, but not so much in T-Nagar and such places. I’ve built a wall around myself. I keep moving when fans approach me. I’ve made it an art form at airports.

How does it feel being a huge star in parts of India and anonymous in others?

I like switching off from work, being a normal guy. In Chennai, I work out at a gym or go to a store and pick up DVDs or gifts. I only feel bad sometimes when I see that so many Hindi actors have watched my movies to remake them. But when will Hindi audiences see my work? I guess that will change with Raavan.

What did you think of ‘Tere Naam’, the ‘Sethu’ remake?

Salman (Khan) is a great friend. He rose to the occasion in Tere Naam and made it romantic. In Sethu, people liked that I was this tough guy in the first half, then lost 15-16 kilos to become like a vegetable in the second. I enjoy transformations.

You had a horrible accident when you were in college.

Yes, I was knocked down by a truck and was on a hospital bed for three years. I had to go through 23 surgeries. Doctors said I wouldn’t walk again. But there was no stopping me; I wanted to be a hero. My blood group is B+ and that’s my motto as well. The experience made me more tenacious. Success was mine when I got it.

I’m one of Tamil cinema’s best fighters despite my leg; I dance competently too. Make your weakness your strength.

You had a long struggle before you made it as a star. What was that phase like?

Yes, I dubbed for other heroes. For Prabhu Deva, Chakri (J.D. Chakravarthi), who did Satya, Telugu star Venkatesh and Abbas for Kandukondein Kandukondein and other films. Even then, I was selective (laughs). I didn’t look down on dubbing. I saw it as dignity of labour. I took my time to understand a scene, not rattle off dialogues. I learnt a lot—how to sound when you’re cold or beaten. It’s helped me dub now for the Hindi, Tamil and Telugu versions of Raavan.

What are your other passions?

I’m a professional bathroom singer. But I don’t sing to my wife (Shylaja); she’d probably run away! I have pets— cockatoos, a beagle, boxers, geese and chicken on my farm. I like taking care of them.

Do you discuss your roles with your wife and children?

No, I like it to feel like a surprise when it’s unfolding on screen. I remember during Sethu, I lied to them and said I had to lose all that weight because I was playing a bank robber who had to escape through the exhaust vent.

Raavan and Raavanan released in theatres on Friday.