Why we need an urban design commission

Why we need an urban design commission

In the level of urban squalor, greed, civic irresponsibility and lack of urban governance, few cities can rival Delhi. If ever there was a place on earth gone to seed, this is it, this is it. 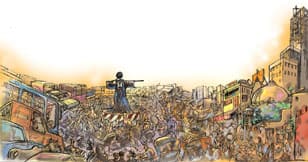 I have lived in Delhi for the past 25 years. Since the 1980s there has been a steady decline in the quality of urban life in the city. Once it was possible to walk from home to market, home to playfield, and home to school without the burden of population or pollution or fear of traffic. It was possible to use walkways, parks and urban monuments as easy accessways in a way that the urban experience was an integrated seamless whole. To cycle along a lake filled with geese and ducks, stopping for an ice cream under a canopy of low trees, peddling past a stream filled with trout, or waving to a party of schoolgirls canoeing in dappled sunlight, passing through tunnels of brambles and shrubbery, and arriving at the office, perhaps a little sweaty, though refreshed and oxygenated... Sorry, I was thinking of Copenhagen.

The Delhi scenario is slightly different. You wake up at 6am to move the car out of a driveway filled with six other vehicles, then wait to fill two buckets at the municipal water truck and hurry through tea in a windowless room, which in any case overlooks only a neighbour’s window. Ease quickly into the morning rush hour traffic to spend the next 50 minutes in the makeshift office on the car back seat, making calls, shuffling papers, cursing the cyclist, running over a Rajasthani migrant, and arriving at a parking lot so full that its attendant makes room on the sidewalk…

In such a situation, it should be a matter of some concern to citizens of Delhi that bodies such as the Delhi Urban Art Commission (DUAC) should spend time debating the aesthetics of public sculpture or assessing the aesthetic worth of individual projects. The quality of urban life, patterns of settlement, improvement of physical infrastructure and other criteria that define the daily lives of citizens seem to be of little importance to agencies such as the Delhi Development Authority (DDA), the Municipal Corporation of Delhi (MCD) and the DUAC, whose efforts are directed towards more heroic ends—the Commonwealth Games and public art. That the new stainless steel sculpture at the AIIMS flyover does not appeal to members of the DUAC is of little consequence to 90% of the citizens who don’t have adequate public transport, sidewalks to walk on or public greens or recreation areas to call their own, public space and public life.

When so little is done for so large a population for so long, a sense of indifference and failure is but expected. But equally, it is hard to blame this misdirection merely on apathy when the agenda of civic bodies itself needs corrective realignment.

DUAC was set up in 1973 to "advise the Government of India in the matter of preserving, developing and maintaining the aesthetic quality of urban and environmental design within Delhi…"The sole purpose of DUAC today is to judge the aesthetic merits of individual architectural projects. Such a premise is completely flawed.

The very idea that the aesthetics of individual projects can contribute to the collective urban quality of the city is questionable. Is good city living merely an outcome of good-looking individual buildings (if that were so, Gurgaon would be a centrepiece of quality urban life), or is it the result of people’s healthy participation in their environment?

In the 35 years of its existence, how has the DUAC improved the quality of “urban" life in the city? Has it ever attempted to define Delhi’s urbanity and the future direction it may take by creating specific urban design solutions? Or making constructive suggestions on physical connections between parks and sidewalks, cycle tracks and pedestrian movements and other concerns for parking, landscape and tree cover that may benefit its citizens? Have urban design ideas ever been physically applied to city neighbourhoods? The answer, unfortunately, is a resounding No.

Given the city’s degraded condition , is it not time that DUAC’s functions be absorbed into DDA, and a separate and autonomous DUDC, the Delhi Urban Design Commission, be set up to look after the larger civic design interests of the city’s population?

For a few weeks, curious bits of automotive and art history have come to Manhattan. Four of BMW’s famous Art Cars, used as canvases by artists Andy Warhol, Roy Lichtenstein, Frank Stella and Robert Rauschenberg, will be stationed at Grand Central Terminal, New York, from 25 March to 6 April. They are part of a collection of 16 cars, from a 635CSi to an M1, that BMW has turned over to artists to reimagine since 1975. Pictured here is an M3 from the collection, decorated by Australian artist Ken Done with a theme of parrots and parrotfish.

The French unveiled perhaps the most audacious urban plans in recent memory. Based on a nine-month study commissioned by President Nicolas Sarkozy, 10 proposals for a new Paris masterplan aim to make it the first sustainable “post-Kyoto city" (a reference to the climate change treaty). One of the most audacious is Christian de Portzamparc’s plan: Demolish Gare du Nord and Gare de l’Est, and replace these with a train station linking to the London and Brussels Eurostar lines.

Petz Scholtus, an eco-product designer from Barcelona, thinks up lamps made out of used containers. Her Bidon lamp, shown in the picture, is fitted out with a CFL bulb and is meant to be put together by the user rather than bought (for instructions on how to make it, log on to r3project.blogspot.com).

The beanbag chair, near the Bidon lamp, is designed by a company called Waste in Barcelona, and is made from old car textiles.

The Lieb House, a beach cottage designed by architect Robert Venturi and studied widely as a model of modernism, was nearly torn down. Instead, last Friday, the house went on an interstate journey, chugging up the East River by barge to its new home in Long Island. The 83-year-old Pritzker Prize-winning architect built it in 1969 for Nathaniel and Judy Lieb, near the north tip of Long Beach Island. The last owner’s plan to demolish it led to this unusual rescue effort, involving a sale to an owner willing to relocate it.

Gautam Bhatia is a New Delhi-based architect and writer.