When 51-year-old Neena Goindi’s office shifted to Safdarjung Enclave, New Delhi, six months ago from RK Puram, her first thought was about the stupendous increase in her commuting cost from her home in Faridabad.

She had been accustomed to a long work commute (35km to be exact) for seven years but carpooling with two other women had helped cut costs over the years. With carpooling no longer possible with her old friends, Goindi needed to spend an extra Rs5,500 every month, something she could ill-afford. But the only way to get to the current office location without a car is to change four buses and two autorickshaws. “Even the bus timing is not reliable and it takes me about two- to two-and-a-half hours one way," she says. “I had no choice but to travel to work in my car."

A few weeks ago, things changed. Goindi came across a website called Carpooling.in on Google. “I posted a requirement on its public forum and the same evening got a response from a lady who lives two blocks away from my home," she says. In the blink of an eye, she had a carpool partner.

“Ideally, public transportation is the most cost-effective, but it’s rather painful because it’s so unreliable in our country," says Arunprasad Durairaj, co-founder of Zinghopper (zinghopper.com), a social site started in May for ride-sharing—something like a Facebook for carpooling—in Bangalore and Delhi, with plans to expand to Mumbai and Chennai soon. “Look at it this way," he says, “you could be a ride away from meeting your best friend for life, potential client, next employer, or your life partner. You never know what happens." He pegs the carpool market in India at 100,000 users right now, and feels it is bound to grow.

While car-pooling is not a new idea, of late there has been a surge in start-ups like Zinghopper in different parts of the country. All of them have a similar aim—providing a solution to the terrible traffic jams and pollution that every city is facing.

A year ago, stuck in a jam on Old Mahabalipuram Road in Chennai, 21-year-old M. Manoj noticed that almost every car around him had only one person in it. Then in his final year of computer engineering, he researched carpooling, and along with three friends, has formed a website called CarShuffle (www.carshuffle.in), which will be launched this month. CarShuffle will help car owners in Chennai manage growing travel bills by offering a seat in their car to a passenger for a small fee fixed by the car owner and a small commission to the website (5% on each transaction between car owner and passenger). “CarShuffle is not only for saving on fuel costs but also a social cause. We want people to realize that it helps in saving the environment by lowering pollution and congestion in our cities," says Manoj. Frustrated with the increasing number of traffic jams in the city, Shah has launched an initiative called Pune Moves Together (www.punemovestogether.com), a site that connects people who want to share their vehicles with passengers going the same way. It was inaugurated on 23 May, the day petrol prices went up by ₹ 8.21 per litre in Pune. “It’s a free-to-use site and I paid for its development from my own pocket as I want to pass on something other than a degenerating environment and traffic jams to my two-year-old," says Shah. He hopes enough people from the city will sign up and create an ecosystem of carpooling. He says 510 people signed up within three weeks of the launch.

Some people are not convinced about the viability of carpooling. “How do you induce the shift from one person per car to three people per car?" asks Ashok Datar, chairman, Mumbai Environmental Social Network, an NGO working in the field of traffic discipline and management in Mumbai. Datar tried to convince people to carpool some years ago, but failed. “There is a terrible disconnect between personal and social good. Cars are a symbol of achievement, a status symbol. Indians just don’t want to share this personal luxury," he says. He feels that the only way an Indian will carpool voluntarily is when he cannot afford the cost of travel or the monthly cost of parking his car.

Bangalore-based Vipul Kasera, who founded CommuteEasy(www.commuteeasy.com), one of the first free carpooling websites for individuals, agrees with Datar that technology and incentives are not enough. “It will take time and conditioning for Indians to get comfortable with the concept," he says. Even though the website CommuteEasy has been around and free-to-use since 2006 for eight cities in the country, it has only 20,000 sign-ups—still the largest figure for any carpool website in the country.

“Safety is definitely a big concern," says Kasera, who is trying to get companies to create employee carpools. CommuteEasy creates a custom page for a company where an employee can log in to check on fellow employees coming from the same direction. This allows flexibility, creating “clusters" of 20 or more employees travelling in the same direction, so if an employee is late by 15 minutes and misses his regular carpool, he can always carpool with another one from the company. “This makes the carpool model more flexible and safe too since all of them work in the same company," says Kasera. The company also benefits: It saves on attrition costs (the stress caused by long commutes is one of the main reasons for quitting jobs), parking costs (rental of about ₹ 2,000-4,000 per parking slot in a technology park), and on providing cabs to employees. CommuteEasy charges ₹ 4-5 a person per month for the service to a company.

Kasera’s corporate services, launched in February 2011, have already created customized solutions for companies like Hewlett-Packard (HP), ThoughtWorks and MindTree in Bangalore. He feels that focusing on communities—technology parks with a cluster of smaller companies, resident housing societies, the same communities—will encourage carpooling. “People have to know something about the person they are travelling with," he says.

Zinghopper, meanwhile, uses a Facebook login to allow people to create their account. This ensures that the sign-ups are “genuine". “Obviously, people are not very comfortable travelling with someone they do not know about," says Durairaj. Zinghopper also confirms a user’s corporate affiliation with a simple email verification of their official email ID. “Almost everyone we have surveyed indicated that security is a deal-breaker," he says. 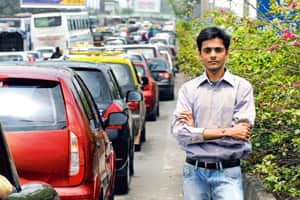 Like Kasera, Sheth feels that encouraging employees from the same company is the next step in carpooling. The SmartMumbaikar team is already in talks with eight-nine companies to create mobile solutions for enterprise car-sharing. This application will be developed for both mobiles and desktops and will be charged to the company at ₹ 4,000-5,000 per employee per annum, says Sheth, adding: “Trust is an important factor for a ride-sharing concept to work. If you are from the same company, you are open to sharing your car".

Feel like splitting the cost of your travel? You could find the right carpool partner on these sites 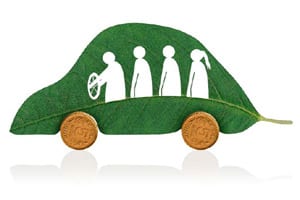 Almost everyone is a car or bike owner in the 25-35 age group.

Addicted to Facebook? Hook on to this zany new site for ride-sharing. Meet new people online and find out if any of them is the ideal travel partner for you. You get to split your travel expenses and meet people, in one go.

On registering, you see an interactive map with your route and timing, and can see other users who are on the same route at the same time. The site then helps you connect with other users.

Charges: Commission of 5% on each transaction between car owner and passenger

The site needs basic details and a photograph for verification, and you have a huge number of options, from location and time to vehicle type and gender preference—you even have autorickshaws and radio cabs as options.

The app is a sign-on with your Facebook account and aims to connect you to friends and friends of friends travelling in the same direction. After detailing your direction and timing, you can choose from friends only, friends of friends or even all Mumbaikars. You can also choose your gender preference.

Options for intercity and intracity pools set the site apart, and if the site doesn’t automatically match you with other users, you can also manually go through a list of people travelling in the same direction.

One of the older sites for car-sharing, CommuteEasy has a simple interface to connect you to the right partner. You enter your location and time details, mention whether you are a passenger or driver, and then give your details. Like CarShuffle, it shows an interactive map and allows users to connect easily. Your profile also shows your savings in terms of money and carbon footprint.

Carpools: Mostly Bangalore, though the site has users from eight cities

Search for a potential partner by filling in your requirements. Once you put in your requirement, it shows you all the matching profiles, along with details like a map with the exact route, gender, and how many seats the carpool has available. You can see everyone’s details once registered. For security, they ask for a driving licence, though it is not mandatory. But it does add to the trust factor.