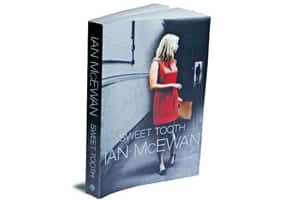 In theory, the spy novel and McEwan’s world view were born to coexist. Both are exercises in rational inquiry and moral uncertainty, both interested in the unknowable chasm that lies under the contrivances of the ordinary world. Sweet Tooth is a spy story that is also a coming-of-age, a mode of discovering the world and its alarming habit of falling apart at the seams. As the older Serena takes us through the charmed circumstances of her irreproachably middle-class existence in first person, she tells her story with well-behaved bitterness, allowing herself to poke mild fun at youthful enthusiasms and disappointments.

Serena Frome, daughter of an Anglican bishop, is on a ‘secret mission’ where she meets a young writer and eventually falls in love. Can she maintain the fiction of her undercover life?

After a professor-lover recruits her to the “Service", Serena’s washed-out days in the sexist, grubby professional London of working women seem to run from one disillusionment to another. Then she becomes involved with Tom Haley, writer of, ahem, solidly plotted, relentlessly nasty stories—summarized in detail in Sweet Tooth. Tom may well be McEwan’s most autobiographical character (cheeky lines include: “A lot of coverage seemed to suggest there was something unmanly or dishonest about a short novel."). But Serena, and the pace and length at which she allows her story to amble, also seems to be the product of a more biographically attuned imagination than before. She falls in love, conceals her secret career as an operative, and encourages her mark to produce a novel. Without giving away the plot, it turns out not to be the sort of agitprop her seniors were hoping for.

If only Sweet Tooth itself weren’t too long and too slack to be any fun. Novels about publishing are generally detestable; future novelists should consider it a warning that even McEwan, the cool, rationalist brainbox who could write his way out of handcuffs if he needed to, cannot get one right. There are classic McEwan plot twists, major and minor, but even more opportunities to grow weary of his dull pursuit of psychological truth, his relentless middlebrow misogyny, and his flat recreation of an era and setting which other writers—impossible for me to get away without naming John le Carré—have evoked far more purposefully.

Critics have always loved McEwan for his talent at writing books we are afraid to put down, and then afraid to pick up again, so acute are they in establishing small universes of pain. Sweet Tooth, by contrast, slips down like an overdose of jam; easy and liable to leave one with regrets soon after. I look forward to McEwan ceasing to write like a McEwan imitator in future.