Hyphens are exercises in simultaneity. Through the impression of a simple dash, two compound words are superficially conjoined to create a third. The hyphen forms a bridge between the two units whose identities are consequently married and therefore react to each other to generate an alternative dimension, a renewed prism through which language is elevated to the level of connotation. Artist Reena Saini Kallat plays with the grammatical symbol, transforming it into both metaphor and motif in her solo show Hyphenated Lives, which opened on 11 September at Chemould Prescott Road, Mumbai.

Kallat positions two entities that represent zones of conflict and hyphenates them, but not with a conventional dash. She elongates the hyphen with barbed wire and, in doing so, subverts the conciliatory purpose of the cipher. The ensuing image is a hybrid, which, because of the sheer impossibility of its genetic constitution, can only exist on paper as a blueprint. Kallat appropriates the floral and faunal symbols of two countries that have been in a state of prolonged diplomatic impasse and stitches one to the other so that the hyphen resembles a surgical scar. Consider her Oak-palm, a shadowed being with two joined yet different barks, the one on the left branching out into the well-defined fronds of the palm tree, the one on the right encompassing the great leafy width of the oak, host to an intricate ecosystem. This mutated organism is punctuated by barbed-wire roots. Through taxonomic subtitling, Kallat reminds us that the oak, “a symbol of strength and endurance", was designated in 2004 as the official tree of the US, while the Cuban royal palm (Roystonea regia), abundant in that country, has long been considered a symbol of Cuban strength. 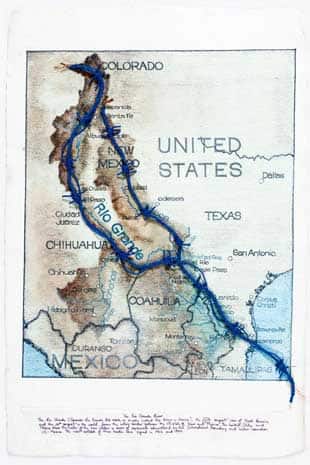 However improbable, each new creature conceived as a result of Kallat’s imaginative experimentation with genetic engineering is a proposition. Her suite could easily also be called “Hypothetical Lives", since each one exists as a theoretical premise. Within this newly realized taxonomy lies the possibility for dialogue, cross-border breeding and cultural synthesis. “What if?" is the taut yet overwhelming question Kallat seems to ask. “Being native to the same lands, these hybrids seem to symbolically unify the nations they represent, offering a peek into such a moment of unison, in what appear to be either artefacts from the past or propositions for an imaginary future," says Kallat.

Kallat is an alumnus of the Sir JJ School of Art, Mumbai, which is where she met her artist husband, Jitish. She’s a mid-career contemporary Indian artist who early on adopted the bureaucratic stamp as a viable motif in her work, subverting its official usage as an institutional symbol of sanction to invoke lost names and histories. She created portraits out of such inverted stamps, reminding us of post-colonial proclivities, like in her monumental one-ton, cobweb-shaped work that was installed in 2013 over the facade of the Dr Bhau Daji Lad Mumbai City Museum, summoning the original British street names and contrasting them against the more regional-inspired and recently instituted local names.

Titled Untitled (Cobwebs/Crossings), the work referenced the twin processes of memory and forgetting. In her ongoing Saline Notations series, begun two years ago, Kallat has extended her fixation with the rubber stamp while embracing the medium of salt—it involves her creating text using salt and a stencil upon a seashore. Her work straddles various mediums—painting, installation, performative interventions, as well as sculpture and video.

Siamese Trees and Half Oxygen, both 2014 pieces, embody Kallat’s predilection for merging into one composite whole emblems from two partitioned territories that in fact share the same ecosystem and atmospheric temperament. In both works, electric wires have been woven into the framework of a large embroidery hoop to create a tapestry of a pair of lungs, with one half representing the banyan, India’s national tree, and the other the deodar, its Pakistani counterpart. While Siamese Trees shows the two trees beside each other, like Siamese twins, Half Oxygen has them encased within lungs that branch out from the same upturned root, thus engendering their shared history. “I often think of this conjoined form as an allusion to nature’s defiance of the artificially imposed, man-made divisions of the ground," says Kallat, whose 2013 work, Anatomy Of Distance, presaged the cartographic metaphor with woven wires assembled like a spine, embodying the distorted contours of the Line of Control, the boundary between the two longtime “enemies".

The hyphen is hybridized as well. Essentially envisaged as electric cable, the symbol is articulated either as barbed or knotted wire. When used in abundance, it creates a messy network of circuits suggesting, in certain instances, like Anatomy Of Distance, the relative impenetrability of barriers, or tracing global migratory routes in works like Woven Chronicle(2015).

In two works, Ruled Paper (Red, Blue, White), made in 2014, Kallat extends the visual significance of her preferred motif, momentarily escaping the complex narrative of nationhood and the politics of migration to focus on the most primal of geometric, cartographic and chronological forms—the line. If in the beginning of our aural and linguistic universe there first existed the word, the origin and evolution of our visual galaxy can be traced back to the human conception of the line; a long, one-dimensional row bound by two distinct end points, yet encompassing every point in between.

“Do you silence my protest? Should I protest your silence?

Do I hear what you say? Do you speak what I hear?"

Kallat asks these questions in her provocative new addition to the Saline Notations series featuring bodies or fragments of text stencilled with salt upon the seashore, on the cusp between the low and high tides. Probably the longest piece of text she has so far employed, every feisty and political line, though ending in a question mark, is forcefully rhetorical rather than quietly inquisitive. Still, they must all meet the same fate; erasure by the enclosing blanket of sea that will unfurl with the rising tide as it appropriates the shore.