The peculiar pedigree of the business class

The peculiar pedigree of the business class

Forbesmagazine has put out a list of the world’s 1,210 billionaires. Fifty-five of them are Indians. A billion dollars is ₹ 4,480 crore. A Baniya is a member of the Vaish caste, originating mainly from Rajasthan and Gujarat.

They are under 1% of India’s population. 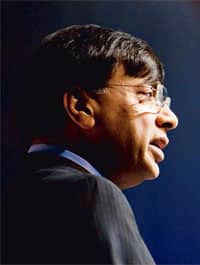 Score: Baniyas 8, Rest of India 2. If we consider the Gujaratis Godrej and Premji (from the Lohana caste) as coming from mercantile communities then actually Rest of India wasn’t playing this match so far.

India’s 11th richest man is K.P. Singh of DLF ($7.3 billion). He is the first departure from our trend of mercantile castes. Singh is a peasant, the most populous caste grouping of India, about 50% of our population. From numbers 11 to 20, there are four Baniyas. They are Anil Agarwal of Vedanta ($6.4 billion), Dilip Shanghvi of Sun Pharma ($6.1 billion), Uday Kotak ($3.2 billion), and Subhash Chandra Goel of Zee, ($2.9 billion). The non-Baniyas are Shiv Nadar of HCL ($5.6 billion), Malvinder and Shivinder Singh of Ranbaxy ($4.1 billion), Kalanithi Maran of Sun TV ($3.5 billion), Mukesh Jagtiani of Landmark ($3 billion) and Pankaj Patel of Cadila ($2.6 billion).

The last five, from 51 to 55, include two Baniyas: Mumbai builder Mofatraj Munot of Kalpataru ($1 billion) and Ashwin Dani of Asian Paints ($1 billion). Two of the others are from mercantile castes: Parsi Anu Aga of Thermax ($1 billion) and Khatri Harindarpal Banga of Noble ($1 billion). Delhi builder Ramesh Chandra of Unitech ($1 billion) ends our list of Indians with a billion dollars or more.

The list has three Parsis, two Muslims and Sikhs in one spot (shared by the Ranbaxy Singhs). Banga is also a Sikh name but Harindarpal is clean-shaven. All of them, except Poonawalla, have inherited their wealth, though in the case of one (Premji), he took a small firm and made it global. There is nobody from the scheduled tribes or castes.

India’s large peasant castes have some representation (Singh, Patel, Reddy), but not much.

There are 26 Baniyas on our list. Many of them inherited their wealth, but just as many (Mittal, Ruias, Adani, Dhoot among others) are self-made.

The list has 16 Rajasthanis, and 13 Gujaratis. Every single Rajasthani is from one caste, Vaish, though they are from two faiths: Hindu and Jain.

Only Gujarat is capable of producing billionaires drawn from four different faiths—Hindu, Parsi, Jain and Muslim—and three different castes: Baniya, Khatri and peasant. This is unique in India and there is something about this secular mercantile culture that produces great men across communities. What is it? Three out of the four biggest leaders of the subcontinent under British rule were Gujarati, and they were drawn from these three castes: Gandhi, Jinnah and Patel. Only 5% of India’s population, Gujaratis don’t have the numbers to dominate its democratic politics. But businesses are not run in democratic fashion. And to rise, you need quality, not quantity.

The heartland of India, where our quantity resides, is missing from this list. Bihar, Bengal, Madhya Pradesh, Odisha, Uttar Pradesh have little or no representation and this does not surprise us.

On the list are 10 south Indians, in proportion to their 20% share of India’s population. The famous five from Infosys are obviously self-made. Of the others, four are first-generation wealthy. This is a good indicator for the future, and it restores some balance in favour of Rest of India.

Two final observations. India’s greatest businessman is not on this list. Why is that? It is because Ratan Tata owns less than 1% of Tata Sons. He is exceptional in every way.

Lastly, how many Baniyas in our top 20 attended the Buffett-Gates meeting to consider giving part of their wealth to philanthropy? Zero.

The Baniya’s culture of focused wealth creation is very good in many ways, but not all of this culture is good.