When the world is a stage

When the world is a stage

Ahead of any major event that he is participating in, even as his training activities intensify, wrestler Sushil Kumar progressively begins to eat less. He puts on extra layers of clothing to sweat off excess weight, works harder to burn the additional calories and still tries to maintain enough stamina to last the tournament. Yet, despite these hardships, Kumar says in Hindi, “I don’t know what I would have done had I not become a wrestler." During the process, with consent from the athlete, the respective global sporting body and the event broadcaster, Saluja followed the players with a camera through their training sessions, relaxation hours and actual matchplay to give a glimpse of what goes on in their lives during those crucial days. The story is told in the voice of the sportsperson, talking directly into the camera, or used as a voice over images. 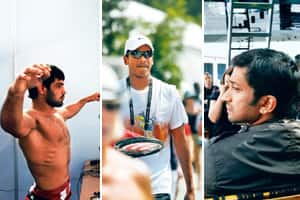 Pros: (from left) Sushil Kumar, Bhupathi and Karthikeyan in the series.

Some choices were obvious, some proved beyond reach. Saluja wanted to include chess player Viswanathan Anand but could not manage it. Boxer Vijender Singh was another last-minute casualty after permissions to shoot him fell through. “That’s a regret I have," says Saluja, of the boxer.

The Mumbai-based film-maker had 4-5 hours of interviews each; these had to be transcribed painstakingly, with the appropriate bits then being used in the narrative. The commentaries include observations from other sportsmen, like tennis players Roger Federer, Rafael Nadal, badminton player Peter Gade and golfer John Daly, among others.

Each episode will have 48 minutes of content, plus commercials to make up the hour.

Saluja says the project was self-funded and the intention is to understand sport from the perspective of its practitioner, not communicate any message. “I wanted to show what goes into making them who they are," says Saluja. “For us, 6 minutes pass by so quickly; for them, it could be eternity. Everything is about the minutiae—shooting is a game of decimals, while golf is one of inches."

“Top-level motor racing is still sort of shrouded in mystery for most," writes Karthikeyan, in response to an email query. “I hope this documentary will give viewers a behind-the-scenes look at the physically and mentally gruelling race weekends from my perspective."

In 2010, Saluja covered Bhupathi during the Rogers Cup ATP Masters in Toronto, Karthikeyan at the Nascar (National Association for Stock Car Auto Racing) Talladega Superspeedway Series Race in South America, and Advani at the IBSF World Snooker Championships in Damascus, Syria. The rest were filmed last year: Kumar at the Fila World Wrestling Championships in Moscow, Jeev Milkha Singh at the PGA Tour in Las Vegas, Bindra first in Dortmund, Germany, where he trains, and then at the Riac International in Luxembourg, and Nehwal at the Li Ning China Masters in Changzhou.

The trips across the planet gave Saluja some interesting insights as well.

When shooting the Karthikeyan episode, for instance, Saluja and his crew were taking ambience shots of the town when they were surrounded suddenly by the sheriff’s men, suspicious at seeing a foreign film group at work. In Syria, before Advani’s event, it started snowing. Saluja and his crew of six were taking visuals of the snow when they were hauled up by officials of the country’s intelligence services, whose offices were right across the stadium. On both occasions, they had the necessary paperwork to go scot-free. But by the time they emerged from questioning at Damascus, it had stopped snowing.

“The film will showcase the efforts, personal dedication, commitment and, of course, the dangers of motorsport," adds Karthikeyan. “For instance, at Talladega, I was running fifth before I had a massive shunt but managed to escape unhurt. Close calls like these are all in a day’s work for a racing driver and I hope that the series will make viewers see the sport and all those who are a part of it in a new light."

Travelling With the Pros will be telecast on weekends from 2-30 June on ESPN.