Just an hour’s hike from the checkpoint that announces your entry to the Binsar Wildlife Sanctuary sanctuary in the Kumaon region of Uttarakhand, Dallar village appears like an arcadian dream. Rustic stone houses with rugged slate roofs peep through the thick foliage of oak, pine and rhododendron forests. The houses are staggered along a slope that gently undulates into a thickly forested ridge. There’s just one problem. Most of the houses are empty. 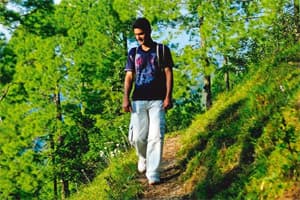 In 2006, a travel company called Village Ways introduced a rural tourism effort covering the five villages—Dallar, Satri, Gonap, Risal and Kathdara—inside the Binsar sanctuary, in an effort to arrest the migration, and maybe even slowly reverse it.

The Village Ways concept is simple: Tourists come on bespoke hiking tours inside the Binsar sanctuary, with a trained villager acting as a forest guide, and stay at least one night in one of the villages. More often than not, the hiking tour covers all five villages, with at least one night’s stay in each. But this is not a homestay project—instead, each village has a guesthouse that can accommodate up to six people, and the revenue generated from the visitors’ stay is shared equally by the families in the village. The guesthouses charge Village Ways ₹ 800 per tourist per day, inclusive of all meals. Guides and porters, who are also hired from the villages, are paid separate salaries by Village Ways. In turn, Village Ways charges its guests according to the package it provides them, which can include all transport and airport transfers, etc. A 10-day Delhi-to-Delhi trip, with stays in all five villages, costs ₹ 41,850 for a single guest, inclusive of all costs. In 2010-11, the combined income for the five villages from Village Ways initiative was ₹ 5.58 lakh. The 12 guides on their roster made around ₹ 2.25 lakh.

“Before Village Ways came here, we had no work at all," says Kasturbanand Bhatt, a 28-year-old resident of Dallar who works with Village Ways as a hiking guide. “If it wasn’t for them, every young man would have gone from the village." Bhagwati Bhatt, 54, who is a cook at the Dallar guesthouse, says that three families, including her own, have come back to the villages since Village Ways started operations. “It will be difficult to get a lot of people back because they left a long time ago," Bhatt says, “but at least those who are still here won’t be compelled to leave."

It all started from a mountain hotel with a storied history, called Khali Estate, just metres from the entry point of Binsar sanctuary. The sprawling chalet, once the centre of the freedom movement in the region, and then a favourite holiday home for the Nehru family, passed down to a local family who turned it into a resort. In 1999, a British tourist came to stay on the estate and trek in the area. Himanshu Pande, 36, whose family owns the estate, organized the treks for him. The tourist was Keith Virgo, an award-winning rural development consultant, and he came back with friends who were also into rural development. Soon Himanshu, his wife Manisha and father Mathura, and Virgo were discussing ways to implement development projects in the area.

Bhatt, who used to work as a casual labourer hopping from city to city to make ends meet before he came back to Dallar to join Village Ways, says that in 2010, his village earned ₹ 1.24 lakh from the project. Says Bhatt: “Rs 90,000 was distributed among the eight families in the village, and the rest was used to pay for the land rent, loan repayment, etc."

The village communities are involved at every level. The villagers provide organic farm produce for the guests and are paid market rates by the committee. Hem Joshi, our sprightly 23-year-old guide, who showered us with a wealth of entertaining information about the flora of Binsar, using Latin names and local names of trees and plants with equal felicity, says he makes ₹ 40,000 on an average every year.

“If it wasn’t for this," he says with a smile, “I would have been a daily labourer."