Forty-year-old Anjali Vijay Kulthe laughs when the matron at Cama Hospital she reports to every morning chides her for doing a “walk-through" of that fateful day once again. When we visit her at the hospital, she takes us first to the gate that two terrorists—one was Mohammed Ajmal Kasab—jumped over to enter the hospital. Next we visit the antenatal care unit, from where Kulthe saw the terrorists, and then the top floor, where the terrorists fired from. It was a long night for Kulthe and the other staff at Cama Hospital, one of the locations under siege.

A year later, Kulthe appears to be the same jovial nurse she always has been, greeting patients with smiles. But as we jog her memory, the signs of trauma become apparent. “I realized I had to live to look after my patients and keep them safe. I was in charge of them," she says. The sense of duty towards her job and to humanity were magnified for Kulthe that night. 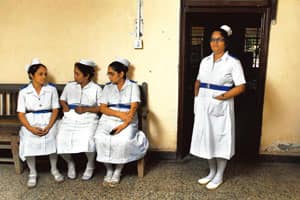 On duty: Anjali Kulthe (standing) has been with Cama Hospital for a decade. Abhijit Bhatlekar / Mint

In the days that followed, she was uncomfortable whenever out of uniform.

The crisp white uniform had given her the strength to go on that night. “When I was on duty, I didn’t for a moment panic, break down or feel scared. The patients were my responsibility and I had to care for them. So I behaved as the uniform demanded of me."

The next morning, when she changed into regular clothes and looked at herself in the mirror, she broke down. “When I changed into my civil clothes I realized I was as ordinary and vulnerable as any other person on the road. I could not understand why I had taken all the risks and responsibility the pervious night. I also could have been killed or hurt like anyone else."

The nightmare did not end there. For almost a month, even the slightest noise would disturb her, and she would wake up with a start at night. “Our matron had specialized in psychology during her nursing course, so she knew exactly how to handle me. For a long time, I was not assigned any serious cases or night duties. She also encouraged me to talk and counselled me."

A month later, Kulthe was summoned to the Arthur Road Jail to identify Kasab. She initially refused to go but the police, she says, convinced her. Though nervous and reluctant, she went, against her family’s wishes, for the identification parade. There, contrary to her expectation, she had no anonymity. She had to point out the suspect in front of everyone, including the suspect himself. When she recognized the man, he smiled and congratulated her on her accuracy. “I felt scared after this. His casual and frivolous manner infuriated me. But more than anything else, I worried about my safety and my family. I got nightmares once again."

When Kulthe was called to testify against Kasab in court, she agreed to go if they allowed her to come in uniform. “Kasab’s lawyer questioned and cross-questioned me. But I answered him confidently and unflinchingly. When I walked out of the court, some policemen saluted me. I don’t think I could have answered so fearlessly and boldly if I had gone in normal clothes," she says.