It’s 9am. Students of class IX at the Noolkunta Jila Parishad High School in Chittoor district, Andhra Pradesh, are sitting impatiently as their class teacher marks attendance, when they spot the yellow Agastya International Foundation bus driving into the school premises. 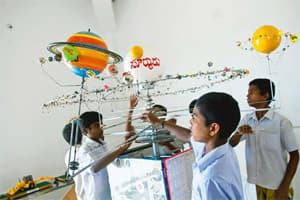 Far from the drone of theory-based science classes, for the children, learning at Agastya means experimenting with chemicals in a laboratory, picking flowers for botany lessons and putting together simple robots at the robotics centre.

“We pick up students from the same class from various schools in villages and small towns within a 30-40km radius from here on a daily basis," says Jayamma, an administrator at Agastya, which is supported by the Sarva Shiksha Abhiyan, a government of India initiative for the universalization of primary education across India.

The children, from classes III to X, spend the entire school day on the campus and usually pack their mid-day meals (free in all government schools) in boxes to eat there. Each student gets to visit the centre at least four-five times in one academic year, says Shibu Shankaran, the campus head.

“In 1998, I was chatting with P.K. Iyengar, the former head of the Indian Atomic Energy Commission, and he told me that India has had great success in creating scientists in the middle and higher classes, but has somehow failed to disseminate a scientific temper among the masses," he says. This was the big idea that Raghavan was looking for, and Agastya was born with the aim to take science to the masses.

Raghavan set out to create the science centre that is now a state-of-the-art campus in a rocky wasteland in Chittoor district. Initial financial hiccups meant that Raghavan had to alter his plan. Instead of starting with a campus, he rolled out a mobile lab in August 2002. The lab, equipped with low-cost models donated by the Homi Bhabha Centre for Science Education and a trained teacher, was an immediate hit with the children in Kuppam, where the pilot project began.

“The mobile lab also helped us sense the enthusiasm with which children would take to learning," says Raghavan. Agastya now has 60 mobile labs that travel around Karnataka and Andhra Pradesh, adds Raghavan. 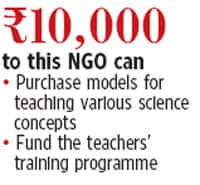 Most of the teachers at the centre come from the surrounding areas and instruct the children in Telugu, also the medium of instruction at the local schools. “But language is rarely a barrier. The form of teaching is very demonstrative," says Shankaran.

The foundation has 400 full-time staff, of whom 60% are instructors. In addition to the free programmes for rural children, the foundation also conducts community reach programmes every evening; instructors go to villages and conduct workshop on topics such as medicinal plants and hygiene for both adults and children. “The community reach programmes help us mobilize those who are hesitant to send their children to school," says Jayamma, adding that the ultimate aim at Agastya is to help children learn and make learning fun.