Unlike the widely popular MasterChef, the contestants of Foodistan, the food reality show on NDTV Good Times that will air from Monday, are not amateurs. Created by NDTV Good Times and produced by Siddharth Basu’s BIG Synergy TV, it is reminiscent of the American reality show Top Chef Masters, where professional chefs vie for the prize.

Foodistan, a 26-part series, will have 16 chefs from some of the best hotels in India and Pakistan competing with each other, in team as well as individual challenges. Don’t go by its gimmicky hoardings, Foodistan has enough healthy competition, judging by its first two episodes. 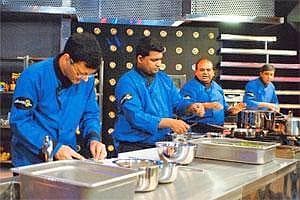 Chef’s hat: The Indian team at work during one of the episodes.

On the Pakistani side, among others, are chefs with experience of working in Dubai, London, Hong Kong, the US and Pakistan’s premier restaurants. Besides Mohammad Ikram of Dumpukht, Pearl-Continental Lahore, a specialized dum pukht chef who also loves to cook Chinese, there is Akhtar Rehman of Marriott Islamabad, who specializes in traditional Pakistani dishes. The executive chef at Park Plaza Lahore, Mohammed Naeem, wears multiple hats—author, blogger, traveller and racing enthusiast, who specializes in Mughlai dishes and pastas. One of the strongest members of this team is Mehmood Akhtar, who spent his initial years cooking for Mehmood Sayeed Sakhery’s Palace in Saudi Arabia before returning to Pakistan to work with Avari hotel, Lahore.

They are set tasks by a panel of three judges - Merrilees Parker from London, a chef and TV show host; actor Sonya Jehan, granddaughter of the legendary singer Noor Jehan, who helped her French mother set up the Café Flo restaurant in Pakistan, and critic and journalist Vir Sanghvi.

In the first round, the judges kept things fairly straightforward. Parker, probably because of her experience as a food show host, was the most effervescent and Jehan the most diplomatic, but all three were largely understated, compared with other Indian reality television judges. Sanghvi’s opinion seemed to matter the most, at least to the Indian contestants, judging by the Indian skipper’s reaction to being awarded a point by the critic.

Based as it is on the theme of an Indo-Pakistan conflict-the teams are outfitted in predictable blue and green, respectively-the first episode is shamelessly dedicated to fake nationalistic fervour: opening shots of mustachioed guards on their routine war dance on the Wagah border, opinion from the streets about which side is likely to win—some of the masala you associate with an India-Pakistan cricket match is unfortunately present. Thankfully, it does not descend to vulgar jingoistic depths. There’s dollops of food culture served up from both countries.

Food historian Pushpesh Pant holds forth on the impact of refugees on both nations’ cuisines over the last half-century. There are cross-border vignettes such as an interview with an Indian gentleman whose sister-in-law in Pakistan requests some mixed vegetable curry every time he visits them.

The live action that followed wasn’t hunky-dory. The challenge set for the two teams was easy enough—a curry, a kebab, a biryani and a dessert. With so many professional reputations on the line, the knives were out and, surprisingly, between teammates. In the Indian team, the classical techniques of Haque grated on the day’s captain, Mehrotra, and the four Pakistani contestants worked themselves up into a tizzy. Matters almost came to a head between chef Md. Naeem, and his sole female teammate, the lively Khursheed Amina Agha, or chef Poppy, as she is known. A chef with her own culinary institute and TV show, she failed to earn her skipper’s respect when entrusted with making the shahi tukda dessert. Naeem’s snide remark that a TV chef didn’t have to serve customers, and that made all the difference, added to the tension, but the shahi tukda was one of the dishes that impressed the judges. The other was Haque’s gosht (mutton) biryani.

If there’s one bone to pick in this well-produced show, it’s the hosts. It’s not clear what makes actors Ira Dubey and Aly Khan qualified to anchor this show. In the second episode, Naeem tells Khan that the Irani seafood biryani is not being made with fish like salmon and tuna but ones from the Indian Ocean. Khan sagely quips, “Ah, bhetki!" Bhetki is a freshwater fish, as every discerning Indian foodie knows.

Foodistan will air on NDTV Good Times from 23 January, Monday to Wednesday, at 9.30pm.