From Vasco Da Gama to the lesser modern day traders, the dhow makers of Mandvi have been integral to the conquest of the sea route to India

The country-craft makers of Mandvi, the ancient port city in Kutch, Gujarat, have mastered the 400-year-old art so well that they sometimes put their plans on paper after the product is seaworthy.

Naushad Thaim, the 24-year-old managing director of Thaim Trading Co. Llc., says a layout design is mandatory for registration. With about 100 sailing vessels under its management, Thaim is one of the largest firms along the coast of the Rukmavati river, adjacent to Mandvi port. 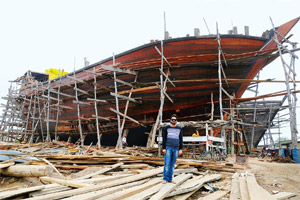 There has been a lull in activity here recently. In a normal year, this coast has about 40 new boats pitched in the dry docks, primed to be carved from imported Malaysian wood. Now, there are only about a dozen boats here. Two of these vessels belong to Thaim, and tower to the height of four-storey buildings.

Developed under Maharao Shri Khengarji-I in the 16th century, Mandvi was once the principal port of Kutch. According to local legend, when Portuguese explorer Vasco da Gama discovered the sea route from Europe to India in 1498, Kanji Malam, a sailor from Mandvi, showed him the way. In the 18th century, merchants at the Mandvi port, including Thaim’s forefathers, shared ownership of a 400-vessel trading fleet that travelled to the Malabar coast, the Persian Gulf and east Africa.

Thaim’s forefathers designed boats before they entered merchant shipping. Thaim’s generation has moved on to management. He has created an in-house team of local experts for design work. The company, incorporated in 1990, is headquartered in the United Arab Emirates (UAE), with most of its operations in Gujarat. It is today the biggest shipping firm in Mandvi, with an annual turnover of about ₹ 100 crore. 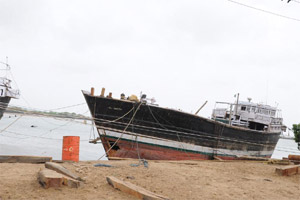 On average it takes about two-three years and ₹ 1-2 crore to prepare one country craft with an average cargo capacity of around 1,000 tonnes. Each employs 50 labourers in its construction.

The country crafts, or dhows in Arabic, each with a travel speed of 10 nautical miles an hour, or 18.5km per hour, have been the target of pirates for ages; they have used them to capture bigger vessels.

This has hurt the reputation of the industry in Kutch, says Thaim, who is also president of the Kutch Vahanvati Association. Business has been down by at least 50% in the last two years due to competition from container vessels.

In 2008, two wooden cargo boats made in Mandvi were captured by Somalian pirates. In March 2010, the Directorate General of Shipping imposed a ban on sailing vessels plying south or west of Salalah near Jamnagar. Mandvi shipbuilders became cautious, preferring to sell vessels only in Mandvi, Veraval and Porbandar. 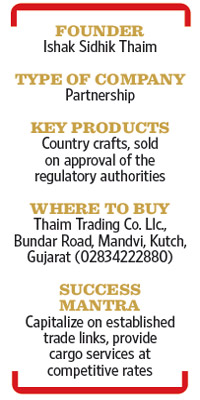 “Boat owners now transport goods for other parties. The ban has restricted us from venturing into Yemen, the Red Sea and African countries, which were major business centres for us," says Ismail Jat, a captain with Thaim.

Post-independence, the family had seen an enhanced opportunity in Mandvi. “We mainly transported dates for merchants in the UAE and India. During Partition, the Karachi port went to Pakistan. There were only two ports on the western coast of India, and Mandvi got a major chunk of cargo. This is when we bought more vessels. We got a lot of business by transporting perishable goods like onions, watermelons and mangoes," says Thaim.

Then, in the 1960s, container cargoes were mechanized and wind power began to be assisted by a diesel engine.

In 1985 the family, which owned a few boats of 50-250 tonnes, began making larger boats of capacities exceeding 500 tonnes. About then, container vessels became faster with technology. And newer ports like Kandla and Mundra affected business.

Thaim got their company registered as an import-export firm about four years ago. “We could have gone for larger vessels, but that would mean hiring people with special skills, which would leave our employees jobless. This way, we can keep our people employed," Thaim says.

Today Thaim is the leading exporter of dates to India and a leading importer of soybean, maize, barley and sugar.