Saraswati to the rescue

The graphic novelist's wry sense of humour makes his latest book, on Delhi's water shortage, worth the visit

Sarnath Banerjee reincarnated the Indian graphic novel when he published Corridor 12 years ago. Previously, the best-known narratives-in-comics were Champak and Amar Chitra Katha, but they were expressly for children. Banerjee’s stories, on the other hand, are for adult-kids. More importantly, his work has emboldened publishers to take chances with a variety of other graphic narratives: Parismita Singh’s ethereal Hotel At The End Of The World; the relentless realism of Abdul Sultan P.P. and Partha Sengupta’s Believers; a psychedelic retelling of Hanuman’s story in Vikram Balagopal’s Simian; the immediacy of the Dalit experience in the B.R. Ambedkar biography Bhimayana, and in A Gardener In The Wasteland: Jotiba Phule’s Fight For Liberty; and many others. While Indian graphic novelists have yet to achieve the heights attained by Art Spiegelman’s Maus, Marjane Satrapi’s Persepolis, or Philippe Dupuy and Charles Berberian’s Get A Life, they are no doubt well on their way there.

Before getting into Banerjee’s latest, All Quiet In Vikaspuri, I ought to mention that my Book-of-2015 was the graphic novel Munnu: A Boy From Kashmir, by Malik Sajad. It’s a memoir of the valley ever since it became an open-air prison in 1990, seen from a boy’s eyes. Inspired by Spiegelman, the Kashmiris are drawn as deer (the endangered hangul), and the panels resemble Kashmiri artisan work, filled with chinar leaves and paisley. As art, it is different from 2007’s Kashmir Pending by Naseer Ahmed and Saurabh Singh, the hard-hitting story of a militant drawn in stark autumnal hues and resembling pop-art modern comics. Sajad uses no colour, perhaps because his story is uncompromisingly bleak. It is bound to raise the hackles of the proliferating hyper-nationalists who see Kashmir as a territorial problem rather than a people-centric one, and it will test the liberalism of even those who believe that dissent strengthens the fibre of democracy. Yet it must be read. 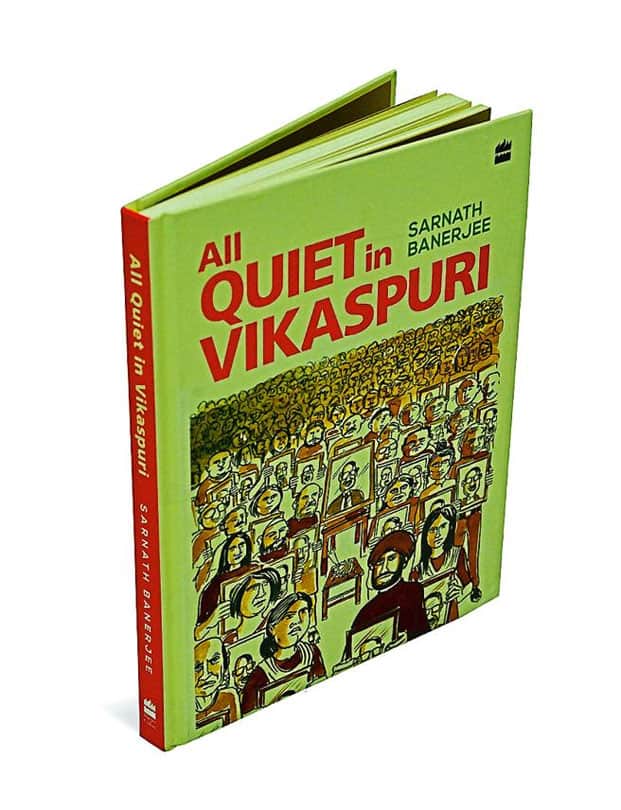 The story of All Quiet In Vikaspuri involves the Psychic Plumber and Delhi’s water wars; it sounds more dystopian than it actually is. Girish the plumber, displaced from his job (and township) by the privatization of a public sector industrial unit, ends up in Delhi, where he is hired for a mission to dig underground in search of the mythical Saraswati and thus solve Delhi’s perennial water shortage. Along the way he encounters a former water-tanker mafioso, a retired army man, a corrupt municipal clerk, and an expatriate spouse. He finds the water but also finds that the water shortage is artificial, and that the water wars are actually a scam to drive up realty prices. The novel climaxes in an action-and-violence showdown, and a set of modestly happy endings.

Banerjee’s strength has always been his character sketches, so his narratives have always been character-driven more than plot-driven. Sometimes this manifests as a story that ends impatiently. But that is more than compensated for by his wry observations, resulting in many an LOL moment: One that springs to mind is on page 71, when, in reaction to a speech before an assembly, a suit-and-tie fellow says, “I feel horny"—with a deadpan expression. And the pièce de résistance of the book is a 15-page section during the water-wars climax, in which each page is modelled on a famous film poster, like “Saving Private Arora" and “Bridge on the River Yamuna" (the title is a play on All Quiet On The Western Front).

Delhi is indebted to Banerjee for giving it so much character with his quiet brushstrokes and sardonic humour; in this, it is luckier than most cities. In sum, All Quiet In Vikaspuri is well worth the visit.