In the last match of the recently concluded One Day International (ODI) series between South Africa and India, Yusuf Pathan scored a century off 68 balls. Some called it one of the best ever One Day innings by an Indian batsman. One shot stood out—Pathan falling over while sweeping past short fine leg to reach 96. What about the rest of the strokes? The picture is hazy now.

After the century he scored for the Rajasthan Royals against Mumbai Indians in the 2010 edition of the Indian Premier League (or was it IPL 2009?), Shane Warne, his captain and marketeer extraordinaire, described it as the best innings he had ever seen. Does one remember a single shot?

Hysteria: (left) A Sri Lanka versus Australia match on the big screen. Matthew Armstrong; and an IPL match in progress between Royal Challengers Bangalore and Kolkata Knight Riders in Bangalore in 2010. Kashif Masood/Hindustan Times

A probable reason could be an overload of cricket, match after match looking alike, going the same way with a bunch of helmeted warriors cross swatting the ball off the ground on flat batting tracks. It’s a marked difference from the time—even a decade ago— when cricket matches were less frequent and, as a consequence, much awaited. They were special events that came rarely. One made plans with family and friends, with parties centred round the game, to watch them somewhere special or even (let’s go back a long way) surrounding the 14-inch black and white screen at the neighbour’s. No, one did not have to check which channel it was on.

That charm seems to be lost, fed as we are on a regular diet of irrelevant matches and meaningless series. So much so that even events such as the World Cup (starting 19 February in India, Sri Lanka and Bangladesh) fail to spark the enthusiasm which TV channels and advertisers try so hard to make us believe exists.

The World Cup has 49 matches spread over 43 days. That’s 8 hours of cricket daily over a month—a tad less than the 51 matches played over 47 days in the 2007 World Cup in the West Indies. No sooner does it end, that the IPL begins. With 10 teams playing 74 matches over 51 days, that’s another 222 hours of cricket. 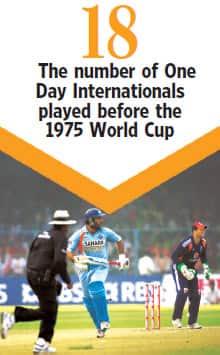 According to data from media tracker TAM, the ICC World T20 in April–May saw a cumulative audience of 102 million, a 40% drop from the millions who watched the IPL a few days earlier. Even IPL ratings dropped after the first season, once the novelty of the new format and glitzy entertainment wore off. According to a study by another media tracker, Mediaedge, television ratings for IPL 3 dropped to 5.4 from 5.7 in the first edition. A fourth of the viewers who saw fewer IPL matches in the third edition said “it was due to fatigue", the media agency notes.

“Cricket is No. 1 but there is also a viewer fatigue that is clearly settling in," Sunder Aaron, channel head for Sony PIX, told news agency Reuters in a 15 December interview. “If you remove the top-shelf properties like IPL and you look at the average cricket ratings through the year, you see a steady decline (in viewership)." But then, Aaron was speaking just after his channel signed a contract with the US National Basketball Association (NBA) to telecast their matches locally.

Yet the cricket fan inside us is always optimistic, ever hopeful of watching that one glorious shot, or a sparkling innings in tough conditions, or an unplayable delivery.

“Yes, saturation point (in viewing cricket) has been reached," says Suresh Saraiya, veteran cricket commentator, who has covered matches for four decades. “But the temptation is always there."

“Players too lack the motivation to work hard sometimes, and with so much cricket played, the game has suffered," says Dilip Vengsarkar, part of the 1983 World Cup winning squad and a former captain and chairman of selectors.

But the perception, accurate or not, that cricket fans—like a smoker addicted to nicotine—will only ask for more, means an increasing number of games are scheduled in a seemingly reckless manner. Take India’s case. A month or so after the IPL, the team leaves for the West Indies to play a T20 international, five ODIs and three Tests. Ten days after the last Test, they will play their first Test against England at Lord’s. Starting with Africa in January, the Indian team will have played in five continents over the year by the end-of-the-year series against Australia in that country.

It is the same perception that sees media buyers—those who purchase advertisement spots on TV channels—willing to pay astronomical prices. Commercial spot rates are climbing ever higher, and that is not only a factor of inflation. According to media buyers, in the third season of the IPL, advertisement rates were ₹ 4.5 lakh for 10 seconds, some 200% more than the first edition. The fourth season of the IPL is priced at ₹ 5.5 lakh for 10 seconds.

“It does seem like an overkill of cricket, but apparently there‘s enough gold out there and the goose is never killed," says Sam Balsara, chairman and managing director, Madison Group, which works in communications.

Nandini Dias, chief operating officer of media buying agency Lodestar UM, says a few years ago, 30-35 programmes had television ratings of more than 1; now there are only 20-25 programmes that deliver the same rating.

“The same is true for cricket," she says. “Every year, ratings come down by 6-7% but that’s because of the increasing number of channels and programmes (fragmentation) than of people watching lesser television or sports." Reach (the number of people who have access to a match on TV) continues to be high, she says. Ratings, unlike reach, are not absolute numbers. They are a function of the people who’ve watched a match, and the time they spent viewing it.

Perhaps the last word should go to the pragmatic Mohinder Amarnath, who made umpteen comebacks to the Indian Test team in the 1980s and was the man of the match in the 1983 World Cup final that India won. “As cricketers, we love to play and in India, we love to watch it. Times change and we have to live with it."