Oak trees, clouds hanging low, and a trip to a waterfallunwinding in a village

My brother-in-law had unstinting praise for a village that he had chanced upon on a bike ride in Uttarakhand. It checked all the boxes for what my sister and I didn’t want to do on a cold and ruthless weekend in January. It was close to Mukteshwar—a place where most of Delhi descends for an unhindered view of the Nanda Devi, India’s second highest peak. The temperature was sure to remain slumped well below 0 degrees Celsius. It had to be accessed via a short hike, something we would willingly forego on a holiday. And the village had only one place to stay, with no markets or other hotels in the vicinity. But there was no reversing my brother-in-law’s plans, so a long weekend was reserved for us to travel to Banlekhi.

We arrived close to noon at the base of the hill, and hiked up to our accommodation—a namesake cottage located at the rim of a valley. It’s a tricky thing to confirm the magnificence of your view, when there is a blanket of clouds wrapped around the supposed valley in front. Cold, white-knuckled fingers clasped around hot tea mugs, we waited for hours for the first glimpse of the village. The clouds were so close that even the steam from the tea seemed to mix easily with them.

Only when the thick grey veil drifted away did the entire view unfold. Even the sun peeked from behind a clutch of thick clouds, assisting in establishing Banlekhi’s allure. The bowl of the valley was stacked neatly with upturned V’s of mountains. Only brightly painted homes of some hamlets created a visual break. As luck would have it, we were rewarded with a beautiful sight. A bright, distinctly clear rainbow swung from one mountain of the valley, and landed behind the soaring peaks on the other side. Our jaws dropped and necks swung in 180 degree, tracing its arc. 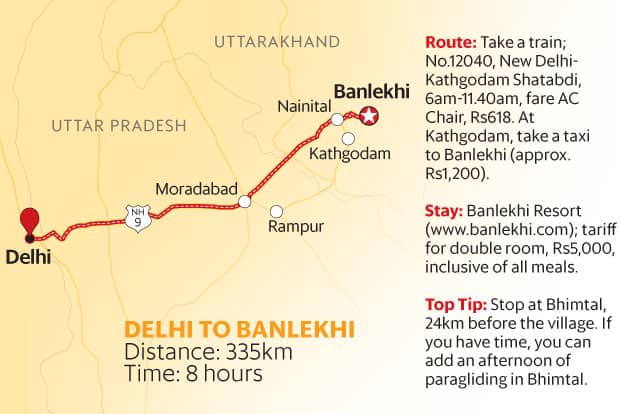 With an unimpaired view of oak trees covering the hills in front of us, the holiday started to look up. Even a short 15-minute hike to the edge of Mahesh Khan Reserve Forest that skirts the village seemed plausible. The clouds had been accommodating enough to magically shift to a hill further away, so we were hopeful to catch the sunset from a designated spot that the cottage owner had ascertained. We arrived just in the nick of time. The orange ball of fire plummeted behind rugged mountains, silhouetting everything in front of it. The post-sunset purplish skies allowed us ample time to get back to the cottage before dark.

A crackling bonfire with local brandy made for an excellent nightcap but squalls blew through the night, keeping us in suspense on how the next day would turn out.

The clouds decided to stay lifted, leaving the sun in charge. It was a perfect day for an easy hike to the Bhalu Gaad Waterfall, about 12km from the cottage. A winding road threaded around the densely forested mountain, and left us at the starting point to the hike at Dhari village. The part paved, part bouldery walk to the waterfall took about half an hour, before we could plonk ourselves on large rocks and watch the 60ft high sheet of water crash into a U-shaped pool at the bottom. Getting under it would be preposterous, but there were other local picnickers who were brave enough to get into the cold water.

The day wound down with a re-run around the bonfire and hearty tributes to the solitude of the mountains, the brave swimmers at the Bhalu Gaad Waterfall and the fresh air of Banlekhi.

Weekend Vacations offers suggestions on getaways that allow for short breaks from metros. The author tweets from @supsonthemove.