When history looks back on 2008, this will be regarded as the year when travel ditched the sun-n-sand variety of tourism and evolved into an experience-rich genre of its own. Finally moving beyond sightseeing, the consummate Indian traveller sought to think out of his suitcase and make a difference—to himself, to his destination, and to the larger world. A cushion for the hard life

At 52, Gaurang Jhaveri, automobile engineer-turned-investments adviser, has a gory health history: osteoarthritis, two angioplasties and a bypass surgery. Individually, they would have felled a lesser man or at least shackled him to the sofa for the rest of his life. Jhaveri, though, looked at his health issues as a challenge. A year after his bypass, he was standing atop Kilimanjaro, Africa’s tallest free-standing mountain.

“This was the only window I had following my ill health, especially the coronary bypass," says Jhaveri. “Africa is the grand obsession of my life: I’ve lost count of the number of times I’ve been to Kenya since my first trip in 1969. On safaris in Kenya and Tanzania, I’d often marvelled at the majestic beauty of Mt Kilimanjaro, which was never far from our sight. Last year, I knew if I didn’t climb it now, I could probably never do it again."

Jhaveri researched hard for a tour organizer who would not baulk at his health issues. He finally signed up with the African Walking Co., affiliated to the London-based African Travel Resource. “What bowled me over was their offer of insurance covering existing conditions. Their promises of an airlift in case of a medical emergency made a difference, too. I’ve done plenty of hardship treks in my youth but I can’t repeat that now," he says.

His family also insisted that his elder daughter Shefali, 19, accompany him on the trek (Kilimanjaro is among the few peaks that do not require mountaineering skills). But before that, Jhaveri had to clear strict fitness tests. “I had to train for three months, since the scant oxygen on the mountain would make the heart beat 170 times a minute. Thankfully, I passed the medical tests with 180 beats/minute and I was allowed to go on the expedition." 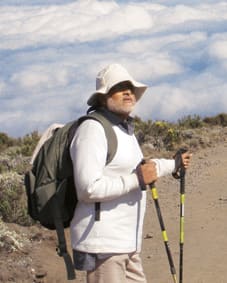 Always a subscriber to outdoorsy holidays that combine dependable comfort with an element of unexpected adventure, Jhaveri has now set his heart on walking through the sand dunes of the Namib desert in Africa. “It’s a 10-day/100km trail through the world’s oldest desert," he says enthusiastically. “The wildlife is incredible—here you see the only lion species that have adapted to living in the desert—and the trail ends at what’s called the Skeleton Coast, because there were so many shipwrecks on this part of the Atlantic."

For Bangalore-based gallerist Shreen Malani, it is the experience of the sophisticated life that is the perpetual quest on her travels. “Whether it’s New York or London or any European capital, my travels are incomplete if I don’t catch at least two plays. I love theatre, especially musicals, and I think I’ve seen every play currently running on Broadway and West End. Shows and performances, from philharmonic recitals to Tom Jones, are another draw—if there’s an artist I like playing anywhere at all when I’m in the city, I’ll make it a point to be there," says Malani.

“The whole idea of old-style glamour excites me, so I make it a point to dress up for theatre, arrive in time for the performance and finish the evening with an excellent dinner that we usually book ahead. I enjoy that whole sense of anticipation, of fitting in—which is why I choose to dress elegantly, like the rest of the audience. If the theatre’s too close to hire a cab, I’ll even carry my dress shoes in a bag and quickly change into them as we enter."

In their 50s, Malani and her businessman husband Ravi, who shares her tastes, make it a point to seek out the environment that most becomes them. They prefer not to stray too far outside city limits and, if they do, it is only for the pleasures of golf and health treatments.

“Earlier this year, we’d visited Turnberry in Scotland, said to be the finest golfing destination in the world, with championship courses—my husband and son are enthusiastic golfers—fabulous views of the Ayrshire coast and accommodation that’s a class apart," says Malani. “The bonus, apart from a superb spa, though, was the range of outdoor activities: fishing, shooting, archery and falconry."

This was how the British gentry lived for centuries and they now package it for travellers to offer them a glimpse of a gracious way of life.

Long before experiential travel became fashionable, Mudra COO Pratap Bose, 45, had spurned by-the-book for out-of-the-box. Most memorably in 2000, he visited Israel for a week, covering Jerusalem, Nazareth, the Golan Heights, the Dead Sea and spending a day with the Bedouins. “We did things and visited places that are no longer accessible now," says Bose of the trip.

For this inveterate traveller, it’s this sense of achievement that makes his handsome budgets worth their weight in gold. “Take fishing. It’s a hobby I have pursued since I was a boy and deep-sea fishing is something I do at any given opportunity. Malta, an archipelago of seven islands in the Mediterranean with a south of France feel, was an excellent experience. I went fishing twice off the Malta bay, a beautiful location made more impressive by the 4-5km long line-up of luxury cruisers and yachts.

“But my favourite when it comes to fishing is the waters off Thailand, largely because of the quality of catch," says Bose. “I must have visited Thailand at least 10-12 times for fishing and I try a new location every time."

Bose makes it a point to engage a deep-sea fishing boat with the best gear and a knowledgeable captain and crew. Fishing can be tiring as it involves sitting for hours in the hot sun and then reeling in fish that can vary in size from 6-7ft to 20ft. The catch of the day is either cooked on board the boat or turned over to the chef at the hotel for dinner.

Want more out of your travels? Take your pick

Donor travel:Altruism is in. So you can do your bit to save the developing world. “Last March, we organized a donor trip to Honduras. Eleven people visited the Pico Bonito National Park to see carbon offsetting and watershed projects, which are helping combat the destruction of the park’s precious resources, loss of biodiversity and degraded watersheds," says Jessica Kenney, a marketing associate with Elevate Destinations

www.elevatedestinations.com). Think of it as the ultimate guilt trip.

Customized holidays:Go where no man has gone before. Or at least, where you can see no man. Whether it’s floating around the Galapagos islands, South America, in a yacht or mountain biking in Idaho, US, if there’s a remote spot in the world, there’s a travel company ready to tailor your trip there. “In New Zealand, you can travel in four-wheel drives, stay in luxe wilderness lodges, swim with the dolphins or spot the seals (but no humans)," says Leisure Ways’ managing director Ashish Chadha (011-25887204).

The most luxurious train ride in the world is in South Africa (www.rovos.co.za). There is wilderness safari accommodation in North Island, Seychelles (www.north-island.com), and in central and South Africa (www.wilderness-safaris.com). You could also go polar bear shooting (only with your camera) in Canada or save the turtle in Costa Rica (www.whydontyou.com). If you have the will, they have the way.