Despite all the recent bad press about accidents and safety lapses, the Delhi Metro Rail Corporation (DMRC) continues to surprise with its smaller, less-than-train-size innovations. Over the last few weeks the DMRC has unveiled a photo exhibition, super-detailed models of DMRC coaches costing Rs10,000 each, and identity cards for officials authorized to charge fines. The last due to “instances of arguments between the staff and offenders who objected to their imposing fines without any authority proof". The sternly named “Authorization For Penalty" card has a spiffy DMRC logo inside in brass. 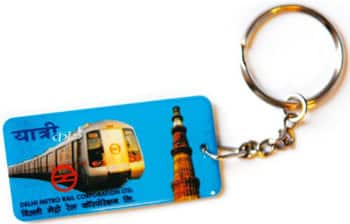 But what Lounge really loves are the new DMRC smart card-cum-key chains. According to a statement on the DMRC website, the key chain was particularly targeted at consumers who drove up to Metro stations and parked their vehicles there. The new card, which works exactly like the old one, is just about half the size, but built of the same unbreakable plastic and acrylic. There is a ring at one end for keys and the card’s corners are rounded, the edges tapered, to prevent injuries.

The new card costs Rs50, and you can exchange your boring uni-functional old one for the multifunctional new one, but not the other way round.