Did you know that embroidery is essentially the same everywhere in the world? It uses the same tools, techniques and materials, but what makes one kind of embroidery different from the other and region-specific are the motifs. And that’s why Jean Francois Lesage, 43, believes he was able to make a seamless transition from Paris to Chennai.

Vastrakala’s works adorn the throne of the Moroccan Palace, the restored crown of King Louis XV kept in the Louvre, the Opéra de Monte-Carlo in Monaco, Tamil actor late Sivaji Ganesan’s granddaughter’s wedding sari, the divine umbrella at the Tiruvannamalai temple, the new yet-to-be inaugurated suite at The Park Hotel in Hyderabad, the Versailles Palace, the Buckingham Palace, and even Lakshmi Mittal’s house in London: The list is as glamorous as it’s eclectic.

The latest feather in Lesage’s cap is the tie-up with French footwear designer Christian Louboutin. Lesage has designed the embroidery for Louboutin’s new line of shoes, using Indian designs, techniques and materials. For instance, the shoes have chumki (glitters), beads, stones and even jewels embedded. 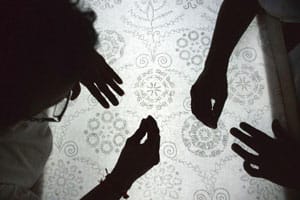 At Vastrakala it is rare for a single embroiderer to work on a piece. M Lakshman/Mint

The first collection of 37 pairs was launched in Europe this summer. The unit is now creating more of such embroidered footwear to be released next summer, for a larger audience.

“Our clients are those who would display our work near their Picassos; they are those who do not choose to invest in gold or land over art, but can afford to spend money on those as well as art and embroidery," says Lesage.

Lesage looks deceptively simple, seated at a cluttered desk in his non-air-conditioned, first- floor office, clad in a white kurta, identical to those worn by his embroiderers downstairs. “The white is to avoid any distraction from colours and patterns while embroidering," he explains.

His embroidery unit houses 50 embroiderers hailing from nearby villages and slums, and caters to just about all kinds of “royalty" around the world.

Embroidery, according to Lesage, is neither Indian nor French. “Embroidery originated in China and Persia, and was introduced to India and Europe by artists who travelled with Persian and Chinese soldiers when they went about invading the countries," he says. “In Chennai, especially in Sriperumbudur in the Kanchipuram district, embroiderers were trained to cater to the Nawab of Arcot and subsequently, the British. Indian motifs here are, hence, highly adaptable."

Vastrakala uses motifs from every venerable tradition one can think of—Renaissance, Persian, Ottoman, African and Japanese. “Any modern design not confirming to these traditions is called an American motif," Ganesh laughs.

(Left)Embroiderers at work at the Vastrakala unit. Jean Francois Lesage comes from a family long associated with embroidery. M Lakshman/Mint

When Lesage travelled to India in 1990, he was enamoured by the quality and artisanship produced by the cottage industries here, especially in textiles and threadwork. “Kanchipuram and Banaras handwoven cloth are a legend by themselves," he says. “But soon, there was a shift in economic policy which encouraged mass factory production over rare small-scale creation. Traditional skills started fading."

He says this was an opportunity. The skill was here and so was the talent, all it needed was a channel and Lesage decided that he would be that channel. In 1993, Lesage sold his family business—the House of Lesage—in France to the Chanel group and set up Vastrakala in collaboration with Patrick Savouret, Sandeep Rao and Malavika Shivakumar. The holding company, JFL (Jean Francois Lesage) is registered in France.

That year, Lesage set out with a team of five embroiderers, creating designs and making collectibles which he would then exhibit in shows. The name Lesage helped in attracting viewers who turned clients. “Initially, that is when he was holding annual shows in the mid-1990s, the clientele was mostly European," says Ganesh.

The walls of Lesage’s office are covered with collages of samples of designs. Books lie scattered on a shelf-cum-table at the entrance. In fact, the whole building, an old-fashioned Tamil house, seems to have been done up with a dose of meticulous carelessness, leaving the homely feeling intact while providing the necessary functionality of an export processing unit.

“We have a design team of seven people—two designers from France and four artists from Chennai, with Lesage himself as the chief designer," says Ganesh. But Lesage is quick to say that he’s mainly a stimulant nourishing the local creativity and talent. “The team is the first to interact with any of the clients, be it royalty or celebrity, around the world. They talk extensively about the client’s requirements of functionality as well as aesthetics and spirit," Ganesh says, explaining how the design process at Vastrakala functions. Consequentially, it becomes the team’s job to also educate those clients whose whims and fancies do not seem to appeal to aesthetic sensibilities.

As the embroiderers in Vastrakala are trained in Indian as well as European motifs, there have been clients who have sought Roman interiors for a Chettinad house or a beach theme for an ancient building. “When we design wedding saris, which hasn’t been often, we are conscious of family traditions," Ganesh says. “For instance, we would make it a point to use motifs like mangoes or peacocks for Tamil wedding saris, but if the bride has a fancy for a certain colour or design, we try to incorporate that too."

The embroiderers here work 8-hour shifts and earn between Rs2,000 and Rs8,000 per month, depending on experience.

Flower power: A sample of embroidery at Vastrakala; and from the collection of French footwear designer Christian Louboutin. M Lakshman/Mint

The elaborate design process starts with penning the design on a stretched fabric, then setting the frame for the fabric. It is followed by the process called chappa—involving rubbing of a zinc powder-kerosene paste on the design to make it clearly visible. There are specialists for each step—design, drawing, painting, chappa and then the actual embroidery.

Lesage explains the atmosphere of learning in Vastrakala, “What is taught here is not so much the skill, but the attitude towards the craft as a serious art requiring eye for detail and meticulousness and above all, a tremendous pride in one’s work. If we need to do 16th century Venetian embroidery for an order, then that obviously needs to be taught. Giving the embroiderers a perspective on the history of that school and the social set-up where their work would soon etch itself would give them a more wholesome idea of the kind of work they do," Lesage says. “It’s these details that matter."