On tour with the Authors XI

Reviving a cricket team that once had P.G. Wodehouse and Arthur Conan Doyle as opening batsmen

When Geoffrey Boycott retired from first-class cricket, he retired from cricket for good. As a batsman who had competed against the very best, he could not bear to track the decline in his powers by playing his beloved sport into middle age. Even picking up a bat caused him anguish. “I would exchange the rest of my life," so he once confessed, “for five more years of playing for England at the height of my form."

I am now 48—two years older than Boycott, when he retired. Unlike him, though, I have absolutely no intention of mothballing my cricket whites. There are two reasons for this. The first is simply put: Unlike Boycott, I do not need to worry about any decline in sporting ability. This is because I never had any in the first place. Although, by dint of sheer effort, I did manage to haul myself up from uselessness to serviceable mediocrity as a bowler, my complete lack of ability at either batting or bowling ensured that I would never make it into quality teams. For most of my career, the cricket I played was for ramshackle teams, on shabby grounds, far removed from any hint of glamour.

Four years ago, though, all that changed. Two writers with a keen interest in cricket history, Charlie Campbell and Nicholas Hogg, began to wonder what had happened to one of the most famous of English amateur teams. Founded in the early 20th century, the Authors XI had featured some of the most celebrated writers of their day. Arthur Conan Doyle had opened the batting with P.G. Wodehouse. A.A. Milne had taken a whole series of blinding catches, and J.M. Barrie had dropped a sequence of sitters. The team had played regular fixtures at Lord’s against teams made up variously of actors, publishers and jockeys. But then World War I had intervened, and something of its glory diminished. Although the Authors were still playing as late as the 1950s, the team folded. But what if it were brought back to life? This was the question Messrs Campbell and Hogg asked themselves. Why shouldn’t the Authors XI take the field again?

And so we come to the second reason why, despite the increasing creaking of my body and limbs, I have no intention of retiring yet. When the Authors XI was resurrected in 2012, I was invited to join. Suddenly, from playing on pitches next to industrial zones and arterial road intersections, I found myself elevated to a whole new dimension of cricket ground. Charlie Campbell, a literary agent as well as an author, had convinced Bloomsbury, the publisher of Harry Potter, that the resurrection of the Authors XI would make a splendid theme for a book. Using the money from the advance, he was able to hire grounds sensationally above my pay-grade.

That summer, I played at venues I had hitherto only dreamt about. We took the field at Hambledon, the birthplace of cricket; at the Valley of Rocks, the kind of ground on which King Arthur might have batted, and which plausibly describes itself as the most beautiful cricket pitch in the world; and at Wormsley, a picture-perfect ground built by Sir Paul Getty, where, in 2014, the Indian women’s team would meet and beat England. Most thrilling of all was the climax of the season: a match played against a team of actors at Lord’s. I kept having to pinch myself that I wasn’t dreaming.

Events, though, were about to take an even more sensational turn. Even before our book, The Authors XI: A Season Of English Cricket From Hackney To Hambledon, came out in 2013, rumours of our exploits had reached as far afield as India. Late in 2012, we received a thrilling invitation: to travel to India and play a match there as part of the 2013 Jaipur Literature Festival. It was at this point that I became convinced I was indeed in a dream. To play in India is every English cricketer’s ambition—but by and large it is only those with a modicum of ability who get to fulfil it. Now, though, wondrously, I had been given the chance. Imagine my excitement, then—and yes, my trepidation too—as I packed my cricket bag and headed off to catch the plane for Mumbai.

What followed was one of the supreme experiences of my life. By great good fortune, our scorer, Laura Jeffrey, runs a company, Passepartout Travel, which specializes in fixing trips to the subcontinent—and she did us proud. The five matches we played on our tour ran the gamut of experiences that India has to offer the cricketer.

We played in Mumbai at the Bombay Gymkhana, venue for the first-ever Test match played in India, and under lights on Marine Drive against Osian’s Cricket Club, as wedding fireworks exploded overhead. In Rajasthan, we sipped cocktails on the veranda of the Umaid Bhawan Palace after a match against the Maharaja of Jodhpur’s XI, and were greeted with garlands and a brass band out in the desert, as vultures soared over a ground specially prepared for us amid the scrub.

Finally came the most thrilling moment of all: a match in Jaipur against none other than the Rajasthan Royals. The Rajasthan Royals! An IPL team! Playing against us! Every second of that day, from the time we turned up at the ground to be welcomed by elephants and dancing girls, to the sight of our captain riding out to the middle on a camel, to the thrilling moment when I bowled the “crown prince" of Udaipur, was like something from a fantasy of what cricket in India might be like. I have never ceased to thank my lucky stars that I got to experience it.

Naturally, we were hammered, as we had been in all our previous matches in India—but it really didn’t matter. It is not the destination that matters on amateur cricket tours abroad, I have come to appreciate, but the journey. Since our first tour to India, we have been back once more, on a trip that included a match at the Brabourne Stadium in Mumbai, and have twice been to Sri Lanka. Most surreally of all, we have even been to Rome, to play cricket at the Vatican.

Last April, we attended a homily by the Pope, shared a mass in a crypt beneath St Peter’s, and were hosted for lunch by the Pontifical College. All those experiences, though, were mere warm-ups—antipasti to the main course. Outside Rome, and with a splendid view of the Alban Hills, where the ancestors of Romulus had lived, and the Pope has his summer residence, we took on the Vatican XI: a team largely made up of terrifyingly fit subcontinental seminarians. Once again we lost—but once again the result hardly mattered. Another astonishing trophy had been added to the roster of the Authors XI’s battle honours. Who would not want to carry on playing for a team that can provide such experiences?

Ultimately, the surest measure of success in amateur cricket is not how many matches are won or lost, not how many centuries are scored or five-wicket hauls taken, but how much team-mates enjoy playing with one another. By that measure more than any other, the restoration to life of the Authors XI has been a stunning success. 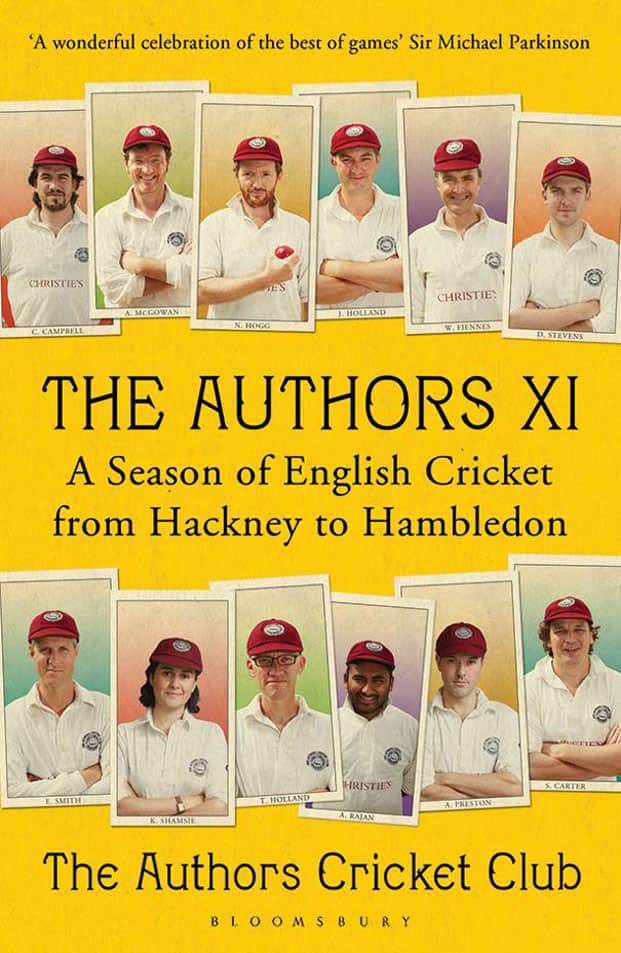 Writing is often a lonely business, and opportunities to meet fellow authors outside the circuit of literary festivals and launch parties limited. Playing alongside me in the Authors, though, are an astonishing array of writers: novelists and poets, historians and nature-writers. I have fielded in the slips next to Sebastian Faulks, author of the international best-seller Birdsong; batted with Peter Frankopan, whose history of the Silk Road was the toast of this year’s Jaipur Literature Festival; bowled in tandem with Shehan Karunatilaka, whose Chinaman is probably the greatest novel about cricket ever written. Over the past four years, we have genuinely become a team: an achievement fit to rank alongside a successful shepherding of cats.

That I wish I had been blessed with a fraction of Boycott’s ability goes without saying. Nevertheless, I still love cricket for all that it has given me—and that is why, in the twilight of my career, when I might well otherwise have given up, I am so grateful to Charlie and Nick for having re-founded a team that has enriched my life so much. Back in 2012, in only the fifth match the Authors had played, I hit my first six. The context was less than heroic. A grey drizzle was falling; the match was already lost; I was out a few balls later. Even the six itself was an ungainly shot: a wild heave that brushed a fielder’s fingers in the outfield before dropping beyond the boundary rope. For me, though, it was a moment I shall ever treasure. Ever since 1981, when I first took up cricket, I had dreamt of hitting a six. Now, 35 years on, I had finally done it.

As with literature, so with cricket: One of its many glories is the rewards it can offer patience.

Tom Holland is a British historian and writer.