The artist recently opened his first retrospective on French soil, but what went into its making?

Subodh Gupta is in the middle of describing how he designed a gold-plated medal at Monnaie de Paris, an 18th century neoclassical building where he is currently holding his first French retrospective. Spanning 20 years, the retrospective, which opened on 13 April at Monnaie de Paris’ contemporary art space, traces the rich tapestry of the artist’s audacious, trenchant work. Monnaie de Paris is also recognized as the world’s oldest government-driven mint.

On a summer afternoon, in an atelier awash with light, Gupta sits in an armchair, dwarfed by the studio’s walls that extend high overhead. Against the white walls hang larger-than-life paintings of burnt cooking pot bases that eerily mimic the fury of the cosmos. Gupta, who has just returned from Paris, speaks animatedly. Leaning back in his chair, he touches the tip of his forefinger with his thumb, drawing an approximate diameter of the medal. Then he slips out his phone to show images. Embossed on a 100mm circular plate is a beautiful cluster of Indian spices—cardamom, cinnamon, cumin, etc. 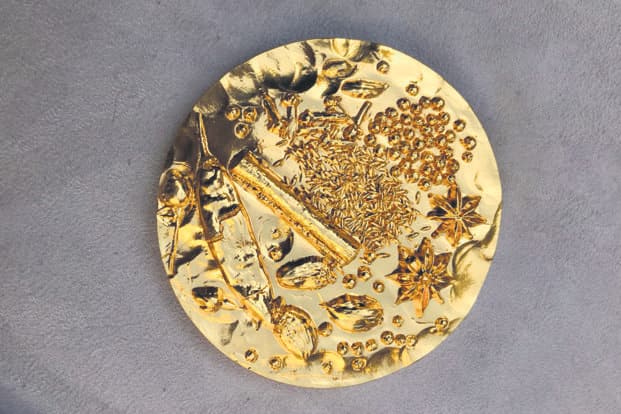 At first, Gupta was hesitant about making the “Garam Masala" souvenir for the museum. But when he saw a medal made by the surrealist painter Salvador Dali, he was convinced to make his own. “Dali’s piece was a self-portrait with a set of four-five spoons. The piece really intrigued me," recalls Gupta. “It was a rough drawing of himself—to me, it was fearless. So I said, ‘Okay, I will be free and fearless in my design as well.’"

In the summer of 2017, Monnaie de Paris’ museum director, Camille Morineau, met gallery Nature Morte’s co-director, Peter Nagy, and Galerie Templon’s founder, Daniel Templon, at a Parisian restaurant. “I don’t know who it was, but one of them suggested that Subodh should have a solo," says Nature Morte’s co-director Aparajita Jain on the phone. “Camille wanted to do a mega-show and she had seen Subodh’s works, and when she saw more of it, she loved it. A year later, came the show." Titled Adda/Rendez-vous, the show features 30 artworks, handpicked by Morineau and co-curator Mathilde de Croix. Each signifies a milestone in Gupta’s career. From the audacious performance in 1999 titled Pure, where he covered himself in cow dung and then stood under a shower, to signature installations, where ordinary utensils, once melded, shape-shift into awe-inspiring sculptural pieces.

Gupta is also showcasing two new works at his retrospective: Unknown Treasure and Adda. The latter, featuring three pillars, is reminiscent of the broken columns of ancient Greek and Roman palatial structures. “When I’d see Renaissance paintings, some of them depicted ruined castles," says the artist. “If you looked closely, you would find wild grass growing out of them, and a lone individual, or maybe two, would be leaning against these pillars and having a dialogue. In India, you would find chaiwallas in makeshift stalls against the backdrop of old temples. People at these shops would be immersed in deep discussions. I wanted to evoke that atmosphere." It is this cross-pollination of views and ideas that Gupta wants to encourage. It’s the overarching theme of the show. It’s a theme that perhaps sits at the core of everything Gupta does—a phantom thread that neatly ties the retrospective together. Art must have context; it must challenge and inspire to birth dialogue. Jootha (2005), featured in Paris, for instance, shows dirty, unwashed utensils. “Jootha is about our culture. It’s about how the upper caste discriminates against the lower caste; or how a woman who is having her period is not allowed to touch utensils. There are so many barriers in our society," he says. In a similar vein, Very Hungry God symbolizes the power-hungry tableau of war.

Each piece culled for the retrospective maps Gupta’s growth as an artist. “These specifically selected works are important. They define how I started my career, where I was in the middle of it, and how my work has transformed today," he says. The architects of the show

Over the last year, Morineau visited India three times. She had exhaustive meetings with Gupta, the Nature Morte directors, and the Indian sponsors: the Indian Council for Cultural Relations and the Piramal Foundation. “But it was Subodh she spent the most time with," says Jain. “Camille spoke to curators who worked with him and went through all the books on him. She really took time to understand his art."

On a table in Gupta’s studio, among a collection of used paint tubes, watercolours, paintbrushes and textured rocks, sits a cardboard model of the Parisian museum. The replica, complete with rooms and staircases, helped Gupta imagine which work could go where. “But making the model was not enough," he says. “A month and a half before the exhibition, I went to Paris for a week. And I walked through the entire space three times with the curator," he adds. “The museum was pretty big and the process of figuring out what work goes where was intense." 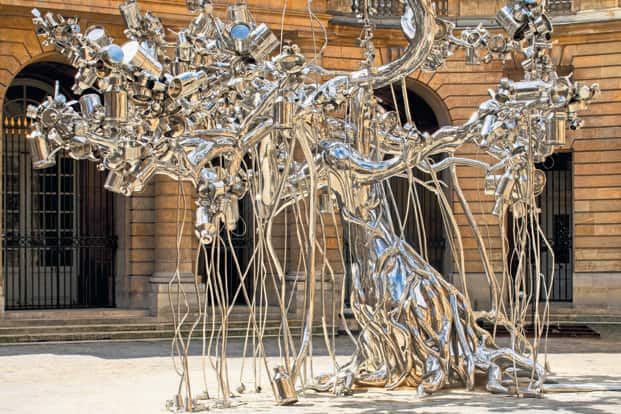 The final product, a flawless juxtaposition of contemporary Indian art against the backdrop of 18th century European architecture, seems nothing short of memorable. “We wanted to show the diversity in Subodh Gupta’s work, diversity of media and of meaning," writes de Croix on email. “Gupta conceives each work as a cultural aggregate: of his personal history, the political and economic history of the world, the history of India in the 21st century, and his own interpretation of the history of contemporary art, in which Duchamp and the New Realism play key parts. That’s what we tried to underline in the exhibition."

While the show reflects Gupta’s roots, what it conveys cannot be located geographically. “The work is not a visual book of my life—it is a book of everyone’s life. We are the children of this planet—we divide ourselves according to man-made social barriers, but I want to look at us from a different perspective. My expression of art is universal."

Adda/Rendez-vous is on view at Monnaie de Paris till 26 August.