“The technology thing gets me nervous”

It has already been a long week for Sir Martin Sorrell.

The chief executive officer of WPP Group Plc., the world’s most valuable advertising and marketing conglomerate, is on a highly sought after—and surprisingly infrequent—tour of India, part of an annual Asia business review.

There have already been a bunch of high-profile media interviews in Mumbai, where he is asked ad nauseam about what he will buy next; a host of internal meetings and presentations from WPP’s growing Indian operations; and key client visits.

It is now Saturday afternoon, just a few hours before he heads off to Indonesia, and Sir Martin is running late for what had originally started off earlier in the week as a lunch meeting but has become more of sandwich, as in our conversation is now in-between a couple of other meetings in New Delhi. A tête-à-tête with finance minister P. Chidambaram and a visit with the Gurgaon-based team of Genesis Burson-Marsteller, the India arm of WPP’s global public relations division, has put Sir Martin well behind in his already packed schedule.

I had been looking forward to the chat all week. The last time I broke bread with Sir Martin was at a small, private dinner on the sidelines of the World Economic Forum in Davos, where the normally opinionated ad executive was in much more of a “listening" mode as compatriot Maurice Levy of rival Publicis Groupe held forth. This time around, I am hoping to draw him out a bit more. 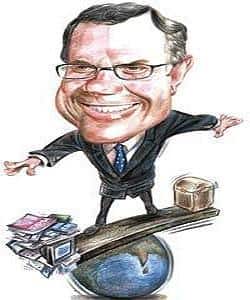 Founder’s pride: When it comes to running your own, the attitude is completely different

It is hard to imagine life being any different for Sir Martin, who has become to the ad world what Warren Buffett is to most investors—a successful dealmaker who has created enormous value through canny acquisitions (WPP’s market capitalization is around $18 billion or Rs72,900 crore) and parlayed that 22-year journey into the role of a soothsayer of sorts. The Oracle of Omaha may write pithier annual letters to his shareholders, holding forth on what he thinks lies ahead, but Sir Martin’s What We Think letter (the most recent one weighed in at just over 13,000 words) is equally sought after and dissected by many in the business.

And what a business it has become.

Starting with a 1985 investment in Wire Plastic Products, a British wire baskets maker, Sir Martin has parlayed a string of deals to create a marketing and advertising powerhouse that has become the ultimate middleman between brands and consumers. Some 330 of the Fortune 500 global giants are WPP’s clients. In places like India, where readers don’t want to pay for what it really costs to produce a single copy of a newspaper (Rs 8 or so for Mint, in case you are wondering), WPP’s GroupM, for instance, can make or break media companies with its ad purchasing power.

Along the way, Sir Martin has transformed—from Madison Avenue’s Machiavelli to Sir Martin Sorrell. When Time magazine compiled a 2005 list of the 100 People Who Shape Our Lives, Ken Auletta wrote that “Sorrell stands tall because he has been able to think outside the box."

Not knowing how much time he has, and in keeping with Business Lounge’s focus, I go for the personal questions.

“So what comes next?" I ask, somewhat cheekily, reminding Sir Martin that he has been at it now for 22 years and, at 62, isn’t getting any younger.

“Yes, I am a boring old man," retorts Sir Martin. “What comes next? I suffer from founder’s disease. I only own a little bit over 1% of the company, but I will carry on as long as they will have me…until someone taps me on the shoulder and says ‘enough trouble, go away’."

But seriously, is there the famous sealed envelope with the name of a successor?

“Ah, the mythical envelope," he says. “There are plenty of other people who can do the job I do. They will probably do it differently than I do and probably do it better. The essential difference is, if you founded something, if you start something, your attitude to it is very different."

Sir Martin then takes a popular quote about football from Bill Shankly, the legendary British football manager, to drive home his point: “WPP is not a matter of life and death, it is more important than that," he says. “I started this thing. Therefore, my attitude to it is as near as a man can do to give birth."

Coffee left untouched, Sir Martin is surprisingly warming up to this line of questioning. Is it getting harder, I ask? “Everybody says I am a micromanager, so that helps," quips Sir Martin. “I think the business is more interesting than it has ever been. There is more of it and while it is not more complex, the scale has gotten a lot bigger, so there is more ground to cover."

Coming off WPP’s best year ever—record billings, revenues, gross and operating margins, what is it that keeps him up (other than jet lag)?

They are geographical and technological reasons, he says. The geographical bit is somewhat easier because “intellectually, you can get your head around it", he says. “If you have great Indian nationals running your business, for instance, I think you are going to be in a very healthy position in India. It is the technology thing that gets me nervous."

I eye his sleek iPhone, but Sir Martin insists technology is very hard for him to figure out. “Maybe because I am not a geek or maybe because I am 62," he says. Recalling something that ex Disney boss Michael Eisner said, Sir Martin says: “I worry about 6-7 PhDs in a shed in Bangalore, or in China, who could come up with a new technology that will revolutionize the Internet. I am not talking about building or buying new digital agencies. In fact, in the last 30 deals we have done, 15 have been online."

The real problem, Sir Martin says, is that the technology road map is very difficult to figure out at a time when Google, even Microsoft, are both competition and customers.

Despite his cracks about not quite getting technology, Sir Martin spends a lot of time absorbing and understanding technology, and has also surrounded himself with a couple of young executives—strategic director Mark Read, 40, who doubles up as CEO of WPP Digital, and 30-year-old Scott Spirit, strategy director for Asia—who are often his sounding boards on what to do with the Googles of the world.

The good news, says Sir Martin, is that “I don’t think our competition has figured it out. For the first time, we are truly differentiated (on the technology score) from Omnicom, IPG, Publicis or Havas."

By now, we have spent nearly an hour and a half and it is the turn of the guys who are supposed to meet him next to start fretting.

As I wrap up with the interview, it is Sir Martin’s turn to ask questions.

“So, how is GroupM treating Mint?" he says.