Gin in a Bottle

Gin in a Bottle

If Xavier Padovani had to describe his job in one sentence, it would be, “In the service of Hendrick’s, the unusually iconoclastic Scottish cucumber enticed gin". He is, after all, the global brand ambassador for Hendrick’s Gin. 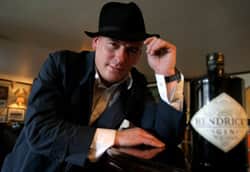 The full-bodied Hendrick’s gin is distilled in Girvan, Scotland, by William Grant and Sons, purveyors of Scotch whiskies such as Glenfiddich and The Balvenie. It is handcrafted in time-honoured tradition in small batches using an original 19th century gin still.

What makes Hendrick’s one of a kind is its delicious infusions that include the oil extract of Bulgarian roses, the essence of cucumber and 11 different infusions such as juniper, coriander and citrus peel. The result is a distinctive flavourful smoothness.

The gin has a niche—and fierce—fan following around the world. Or, as the company says, the gin is “preferred by one out of 1,000 gin drinkers (“Fine by us, it’s not easy making this stuff’!", says Padovani).

Even its look sets it apart from other leading gin brands in the world. It comes in an old apothecary bottle with a cork stopper. “We get a lot of comments on the shape of the bottle. Sometimes, I hear bartenders complain that the neck of the bottle is too thin. But I like it as long as they are talking about it. And we do our little bit for the environment—the bottle is made out of 40% recyclable material." Padovani is amused by the fact that the bottle can even be used as a candle stand once the gin has been consumed.

So how did this Frenchman come to sell a Scottish spirit whose market is primarily in the UK? Padovani, who used to work as a snowboarding instructor at ski resorts l’Alpe D’Huez in France, says he had a strong desire to “learn the English language". Soon enough he was in England, searching for a job. With his English just good enough to get around, Padovani landed himself a job at Quaglino’s, a London bar known for its classic drinks menu. His stint lasted six years, his formative years in the spirit industry. Working at bars was quite a learning experience. In his next job at the Opium bar in London, “we had this incident. A football player came and took a seat at the bar and said, ‘I want Louis XIII and diet cola.’ I think it’s a bit of a shame if you take an aged spirit and mix it with a cola. But I did my job and the customer is king, right?" Unusual: A glass of Negroni Sbagliato.

Even though Padovani likes his Hendrick’s in its most conventional cocktail form—with tonic—some of the other lesser-known gin drinks he’s partial to include the Negroni Sbagliato and Ramos Gin Fizz. “While travelling to Italy, I tried the Italian aperitif Negroni Sbagliato; it was splendid. The history of the drink explains just how it was made. A bartender in Milan had once added Vermouth to the Negroni. Because of this mistake, Negroni became Negroni Sbagilato—Sbagliato means ‘mistake’ in Italian. It’s my favourite drink for summer."

Another drink that Padovani is fond of is Ramos Gin Fizz, created in 1888. It’s got egg white, cream, lemon juice, orange flower water, sugar and gin. “You’d think it would cook! But the drink is like an emulsion, a great 7-8pm drink. But I’m sure if I walk into the bar at that time and ask for such a complicated cocktail, the bartender will growl at me."

“This is the original recipe, I drink mine with a big splash of Hendrick’s Gin with a lot of ice."

A sprig of fresh Rosemary

Use two receptacles to prepare this drink. Place a cognac glass on top of a rocks glass filled with hot water. Add all ingredients in the cognac glass and flame the mix for a short period of time. Pour the mix into a fresh glass, garnish with a lemon twist and a fresh sprig of Rosemary.

The drink has been inspired by a cocktail created in the late 1800s by Jerry Thomas.

But, as Padovani states, you don’t have to take his word for it and make just Negroni Sbagliato and Blazer. Go ahead, make your own cocktail. As long as Hendrick’s is a part of it, it’s okay by him.