Judging the best in a particular sport, across timelines and through physical and technological advancement, is never easy. Context is as important to a macro evaluation as it is when describing one specific match or bout or face-off. Don Bradman over Sachin Tendulkar? Björn Borg or Rod Laver over Roger Federer? Mark Spitz over Michael Phelps? Pelé over Diego Maradona over Lionel Messi? The most common outcome of such an exercise is a mutual sense of dissatisfaction among the proponents of the various candidates, the ultimate 0-0 draw that makes no one happy. 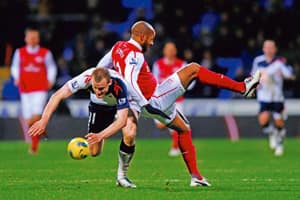 In the top3: Thierry Henry (centre, right) should be among EPL’s all-time best. By Laurence Griffiths/Getty Images

Yet the arguments will rage on, not merely because of club loyalties but over the various possible parameters. Numbers and statistics? Aesthetic values? Power and influence? In a recent magazine debate on Ricky Ponting versus Sachin Tendulkar, one writer argued that Tendulkar had the advantage in every statistic but this one: Ponting had been part of more than 100 Test wins. That, in a team game, swung the debate firmly in the Australian’s favour. Extending this argument, Roy Keane—one of the 10 on the EPL shortlist—has gone typically against the grain, decrying the very concept of individual awards in a team sport.

Keane has a point when he says such awards usually work in favour of players from successful, trophy-winning teams. Steven Gerrard, for example, never won a league title and is unlikely to be named best player even though he has kept Liverpool, almost single-handedly at times, in the fray over a dozen seasons. Alan Shearer did famously win the league in 1995 with unfashionable Blackburn and broke several scoring records while there and later at Newcastle. Would he have won more titles and had a decent crack at the EPL award had he joined Manchester United instead as planned?

The bottom line, though, is that there has to be a winner of this award. To my mind, there have been three players in these 20 years who have risen above the pack, each for a different reason.

A fledgling tournament, with hundreds of millions of dollars at stake and the eyes of the world on it, needed glamour and mystique; it needed a box-office star. Enter Eric Cantona, collar imperiously upturned; for the next five years, he would provide the Premiership with all the drama it needed —playing both hero, with his footballing brain, and villain, with his street-fighting brawn. He was not perfect, as that lunge at Selhurst Park proved, but who else could have combined seagulls, sardines and trawlers in one sentence?

These deeds—70 goals in five seasons—would have given him a shot at greatness but his true worth lies in the influence he had on his teammates, notably Manchester United’s young crop, including Ryan Giggs, David Beckham and Paul Scholes. He showed them the value of constant and relentless practice, staying back hours after each training session to perfect his skill—to the awe of his younger colleagues, who then institutionalized it. A footballing generation later, Cristiano Ronaldo would apply the same principles on his way to becoming one of the two best players in the world.

Cantona was not the best player of his generation—he can fairly be called a failure on the European stage—but he had the measure of the Premiership. United didn’t win the league before Cantona and they didn’t win it in the season of his ban, nor even the first season after he quit cold turkey. But they won it in each of the four seasons he was around at the crunch.

That’s why Nike put out this ad, which mocked England’s only World Cup win: “1966 was a great year for English football. Eric was born." That’s why even today, the Old Trafford terraces herald the onset of Christmas with the “12 Days of Cantona".

If the award was for sheer on-field technical wizardry, Thierry Henry would walk—or waltz—off with it. He was probably the most talented player in the Premiership’s history, a prodigious goalscorer whose record—176 goals in 258 games and the league’s top scorer for four seasons—is even more astonishing given that he was not a regulation centre forward.

Instead, Henry lurked on the left until he made his quicksilver lunges inside that seemed to leave defenders mesmerized. He had ball control, speed, he could pass and, above all, he knew where the goal was—and found it from volleys, from tap-ins, from free kicks and penalties.

Henry’s talents were shaped by his fellow Frenchman Arsène Wenger but accentuated by Dennis Bergkamp, the Dutch master who played in the No. 10 hole, and backed by Robert Pires and Patrick Vieira. This outstanding quartet were at their best in 2003-04, the year of the Invincibles —when Arsenal went through an entire season unbeaten. Only one other team had done it before, in 1889, and no team since.

Henry played 37 of those 38 games, scoring 30 goals; few players have dominated a season as he did. Six months ago, Arsenal acknowledged just that by installing a statue of Henry outside their stadium.

It’s a crude way of describing someone who has taken part, and scored, in every single Premier League season. He has won 12 of the 19 titles decided to date. To bring in Tendulkar again, there must be something more to Ryan Giggs’ numbers than just the cumulative effect. That something more is his footballing brain, which has helped him make the transition from the terror on the left wing to the éminence grise of central midfield, from effervescent to experienced.

When the chips are down for his team, Giggs will simply reach for the memories of almost 1,000 matches at the highest levels of football and find an answer. His influence extends far beyond the field of play; his use of yoga, for example, to stay a match-winner at 38 has inspired others to take it up and prolong their careers. As his team Manchester United go through a period of transition, with another bunch of kids coming through the line, Giggs has played the elder statesman in the dressing room—doing a Cantona to perpetuate the winning habit.