Home / Leisure / Rishab Nanda, schoolboy | A year of growing up

Rishab Nanda, schoolboy | A year of growing up

Rishab Nanda, schoolboy | A year of growing up

For an 11-year-old, the future is a short span of time—the next hour, the following day at a stretch. And that’s as it should be. When Rishab Nanda first heard that some terrorists had entered the Taj Mahal Palace and Tower, he felt happy. That meant school would be closed the next day. But as he sat with his parents and watched what was happening on TV, the effervescence of an unexpected holiday vanished, to be replaced by a weighty sense of fear.

A year on, he continues to carry that weight.

In the days after the attacks, stories of victims were everywhere. Rishab read these, he heard conversations, he discussed some of these with his friends. Everyone knew somebody, closely or distantly, who was affected. So did Rishab, and that made the horror personal. Rishab soon began to believe that though they were safe for the moment, the possibility that he or his family would be affected in a future attack was very high. 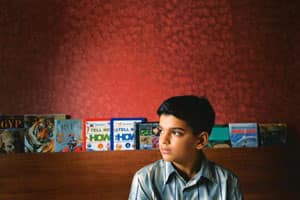 When his mother, Manisha, went out for the first time after the attack, he started to panic. “He kept calling me to ask where I was and what was happening. It was then that it hit him; that if other children could lose their parents to a bullet or a bomb, it could happen to his parents too," she says.

About three months after November, Rishab told his parents that he wanted to go and see the places where the attacks happened. “I am getting scared, I want to tide over my fears," he told his mother. Instead of driving down, Manisha took him in a local train. When they reached the Chhatrapati Shivaji Terminus, Rishab looked around. He was stunned that everything seemed normal. And that helped him beat the fear of crowded places to a large extent. But when they went past The Oberoi and Trident, where some of the damage was still visible, he was quiet. When they returned home, all he said was, “Thank God, we’re safe."

In the course of the year, Rishab has been following terrorism-related stories in newspapers and on television very closely. His parents allow him controlled access to these. “It’s not possible to hide everything from him. He’s growing up and nothing can be hidden for too long. I would rather he process little bits of information gradually than confront it all at once at some time in the future. There is no point in hiding it entirely," Manisha says. However, Rishab has been forbidden from watching the 26/11 programmes airing on various channels this month.

Rishab makes several demands of his parents. He is constantly warning them against going to crowded places. He would not let them leave the house on “important" days, when the possibility of a terrorist attack could be high, such as Republic Day, Independence Day and Dandiya evenings. “Even when he knows I am visiting somebody in the same building, he calls me 20 times," Manisha says. But the most important request he makes is that his parents don’t go out together. When they do have to go out together, he has an endless trail of questions: Will you call me as soon as you reach? What time will you be back? How will you commute? And he stays up, no matter how late, until they reach home. He cannot go to sleep until he knows they are home, safe.

“Even now I think a lot about the attack. I think it may happen again because terrorism around the world is growing. Every day there are bomb blasts in Iraq, Afghanistan and Pakistan. Nothing has ended there, how can we assume that what happened will not happen again here?" Rishab asks. There have been three reports of infiltration, he says. The day we spoke, a television channel reported that the bullet-proof vest anti-terrorism squad chief Hemant Karkare was wearing when he was shot dead was defective. “How can they do this?" he asked.

In another year, Rishab will probably be enveloped in the angst and confusion of a regular teenager. But he will remember 26 November 2008 as the day he grew up.