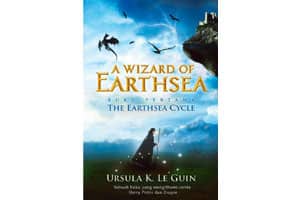 Many works of fantasy are built around a quest of some sort. The quest is one of the most basic forms of narrative there is, but it also provides an excuse to further explore these worlds. There are people, for example, who complain that the bulk of The Lord of the Rings is nothing but a long walk through Middle-earth. This is absolutely true and it’s wonderful if you like that sort of thing. But fantasy writing’s journeys can contain scenes of genuine wonder even for the non-believer and the examples below achieve just that.

Ged’s Pursuit of the Shadow

“With hand and spell, Ged turned his boat and it leaped like a dolphin from the water, rolling, in that quick turn. Faster than before, he followed, but the shadow grew ever fainter to his eyes. Rain, mixed with sleet and snow, came stinging across his back and his left cheek. He could not see more than a hundred yards ahead. Before long, as the storm grew heavier, the shadow was lost to sight.

The voyage documented in Edgar Allan Poe’s The Narrative of Arthur Gordon Pym of Nantucket is not one that a sensible reader would wish to replicate, replete as it is with shipwrecks, cannibalism and ghost ships. Eventually, most of the ship’s crew is slaughtered by a tribe of “savages".

This is all unpleasant, but the book’s most memorable journey is the small section after this litany of horrors has come to an end. Pym, Peters, and the “native" they have taken captive drift further towards the Antarctic in a canoe. As they travel south, the narrative takes on a numb, detached quality. Yet “we were entering upon a region of novelty and wonder"; the water turns white and warm, and white ash occasionally rains down upon the travellers. Then, in a sudden burst of activity, the boat rushes towards a cataract, a chasm opens, and Pym sees “a shrouded human figure, very far larger in its proportions than any dweller among men. And the hue of the skin of the figure was of the perfect whiteness of the snow". And on this weird, ambiguous note, the book abruptly ends. Pym’s journey is no one’s idea of a dream vacation, but it’s impossible to forget.

Yet the best part of the voyage comes after all the islands have been left behind. In a way, this is the reverse of Pym’s journey above. In both cases, the sea becomes warmer and calmer, but where Poe’s book speaks of drowsiness, Lewis gives the impression of extreme clarity. The sun becomes bigger and brighter; where Poe’s ocean turns milky, here the water is so clear that entire civilizations of mer-people can be observed fathoms below. When the water does turn white, it is because it is covered in flowers.

We never find out what is at the utter East; we are left with the image of Reepicheep, the mouse, paddling his coracle over the wave at the end of the world, “very black against the lilies". It is enough.

About half of the plots in Jack Vance’s Lyonesse books involve people travelling on one quest or another. Yet Dhrun’s journey in the first book, Suldrun’s Garden, stands out.

There’s something of the fairy tale to Dhrun’s story (as he insouciantly defrauds trolls and defeats ogres before joining a medicine show), and Vance makes use of a droll, courtly style that is reminiscent of Charles Perrault’s fairy tales. But the real wonder here is in Vance’s ability to tell a genuinely dark story full of things like slavery and sexual abuse, and still infuse the whole with the luminosity of something remembered from early childhood.

An elderly hero is on his way to the city of the gods, which he plans to blow up. What he doesn’t realize is that if he succeeds, it will mean the end of the world. Someone has to stop him, but he already has a massive head start.