V. Ramesh’s exhibition of recent paintings, Why Cross the Boundary, starts with an invocation—a poem by Annamayya, the 15th century Telugu poet and composer whose poem also lends the exhibition its title. “Why cross the boundary when there is no village? It’s like living without a name, like words without love," the poem begins. It ends with the same question: “Why cross the boundary?" Repetition is reiteration. 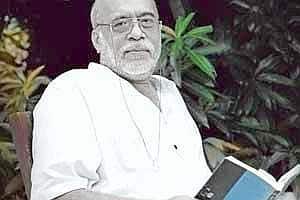 Over years of art practice, the solidity of the human figure and tight compositions have given way to the blurring of boundaries. If dualities are one and the same, then there are no boundaries. Annamayya explains this in the title poem: “What use is ecstasy without the agony of distance…Why have a lover you don’t need to hide?"

Ramesh, a postgraduate from the Maharaja Sayajirao University of Baroda, has had solo shows at the Pundole Art Gallery in Mumbai and Apparao Galleries in Chennai. He borrows from the poetry of three Indian women saints for this exhibition, which will open at New Delhi’s Gallery Threshold later this month.

His cast includes Karaikal Amma (fifth century, Tamil Nadu), Akka Mahadevi (12th century, Karnataka) and Lal Ded (14th century, Kashmir). Each lived in a different part of India in a different period, and wrote in different languages. “But despite these vast divisions," says Ramesh, “all three shared a similar intoxication in their pursuit of the divine. They tested the boundaries between the self and the whole." Crossover: Pining for an Absent Lover is based on a poem by Akka Mahadevi

Why Cross the Boundary has 11 large-scale paintings on exhibit—all around 8ft tall. They’re heavily-layered frescoes. There is, for instance, Pining for an Absent Lover, a painting based on a poem by Akka Mahadevi, which is a palimpsest -a parchment or tablet used one or more times after the earlier writing has been erased - of textures and shapes. Amid its deep blue shades is an incandescent glow on one side of the canvas. “My lord as white as jasmine" - a refrain that runs through Mahadevi’s poetry - floats across the painting. The visual effect is one of whispers, murmurs, dreams and epiphanies. Ramesh has worked on each of the paintings for a couple of years, revisiting them again and again, and they’re palimpsests in the truest sense.

While this intricate layering of paint, images and text does draw the viewer “to enter the canvas", as Ramesh had hoped they would, the potency of the works is reduced by the typography in some of the artworks—making them all too literal. Mahadevi’s sentiments, “My lord as white as jasmine", would have resounded equally well—if not more evocatively—with the delicate jasmine flowers studded across the body of the canvas. But Ramesh etches the letters in as well.

“I intended the text to be supplementary, not ornamental, to the reading of the painting," Ramesh explains over the phone. In some instances, the typography is justified. For the painting titled Remembering Lalla Moj, based on a poem by Lal Ded, Ramesh uses the poet’s words to compose her portrait. He hadn’t come across a single portrait of Lal Ded. “I thought what better way to draw a saint-poet than with her own words," he says.

Where do words and art meet? Where does one cross the boundary of the other? That the exhibition runs parallel to the Jaipur Literature Festival (20-24 January) and the India Art Fair (New Delhi, 25-29 January) is no coincidence.

Why Cross the Boundary will run at Gallery Threshold, New Delhi, from 22 January-14 February. The paintings are priced at ₹ 15-35 lakh.