"storyDirectUrl"
OPEN APP
Home / Mint-lounge / A river runs through it

A river runs through it

A river runs through it

A couple of years ago, an assignment for a French magazine gave me the opportunity to stand in front of the newly constructed barbed wire fence on the Indo-Bangladesh border in West Bengal’s North 24 Parganas district. Eight feet tall, reinforced by the fear of electrocution, with flashlights and ringing alarms, the border fencing project was the Indian Border Security Force’s brainchild to stop all kinds of illegal movement—even of the bovine sort—across the border. The fencing stopped at the banks of the river Ichhamati, which forms a natural boundary between India and Bangladesh. The river flowed unhindered like a folk song, the steady monsoon breeze creating a disorderly tide.

The fence had an aura of finality; the climactic outcome of a territorial division in 1947 which saw a knife being run through people who had everything in common except religion. The fence felt like the irrevocable end of a romance, and, a little over six decades after 1947’s partition of Bengal, the beginning of a stern, independent practicality. Yet the Ichhamati, which criss-crosses the two countries at multiple points, seemed like a link to an interrelated narrative, and a natural nerve still connecting the two people. Mapmaking, however, reaches a critical balance not just through the even-handed spread of six writers from each country, but also with the undercurrent of humaneness and compassion that knits together the stories of shared, cross-border tragedies. It is also worth noting that the Indian and Bangladeshi writers are Hindus and Muslims, respectively—indicative of the religious wedge that led to the partition of Bengals, communal riots in places such as Barisal, Noakhali and Calcutta (now Kolkata), and festering wounds.

Yet, in Ritwik Ghatak’s The Road, two Hindus seek out their Muslim friend in a riot-scalded Calcutta slum. In Pratibha Basu’s Flotsam and Jetsam, Jamir, the Muslim chief in erstwhile East Pakistan, refers to the Hindu landlady as “Ma" and feels helpless when she asks for his advice on leaving for India. A picture of Gandhi hangs on the wall of the Muslim protagonist in Dibyendu Palit’s Alam’s Own House, while Hashim risks his life to save that of his neighbour Paran’s in Ateen Bandopadhyay’s The Infidel—Paran had earlier carried Hashim’s unconscious and fully pregnant wife home.

Similar strains of empathy run through the stories of the Bangladeshi writers. In Hasan Hafizur Rehman’s Two More Deaths, a Muslim passenger in a train paints a portrait in his mind of the terror-struck Hindu family travelling with him. He can offer the elderly Hindu man seating space but no other consolation, caught as the train is in a “deathly quiet". Escaping the Hindu-sponsored pogrom in India, Ali Haider, the central male character in Selina Hossain’s An Evening of Prayer, names his newborn Prateek; his mother’s name is Pushpita—as a reader, there is no escaping the cross-religious linkages of the names. The Muslim encroachers of a deserted and palatial Hindu home in Syed Waliullah’s The Tale of a Tulsi Plant confabulate and decide to let the tulsi (holy basil) plant, with its strong Hindu associations, be. 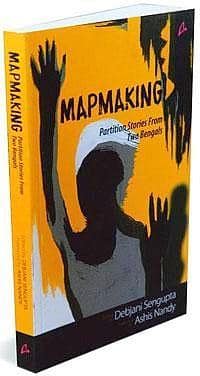 While Mapmaking subtly introduces the dominant players and coordinates which went into 1947’s partition of Bengal, none of the stories ponder the role played by the India-fleeing Bihari Muslim populations to East Pakistan, reportedly as usurping agents of communalism. Or the rigidly held views of upper-caste Brahmin landowners in the villages of undivided East Bengal, where Muslim communities would often live in fringe ghettos, generally ostracized. These issues, which find resonance in the scholarly non-fiction work of Bengali authors and editors like Mihir Sengupta and Sebanti Ghosh, are said to have widened the chasm between communities.

The stories also end with the exodus of refugees to India in 1971 before and after Bangladesh’s Liberation War, even though Hindu refugees have continued to pour into Bengal until as recently as the 1990s, following the demolition of the Babri Masjid in India—a predicament for Hindus in Bangladesh, for whom rampaging Hindu right-wingers had little concern when they went about “reviving" the faith in India.

Even though the English translations by Sengupta and Rani Ray are fluent and engaging, there is a certain standardization of form that renders the writing of Sunanda Bhattacharya and Akhtaruzzaman Elias or Manik Bandyopadhyay and Syed Waliullah within the same stylistic range. Occasionally, the English language too feels helpless against the wit and intricacies of Bengali dialects spoken in East Bengal (which might explain why historian Tapan Raychaudhuri’s fascinating childhood memoirs from Barisal have been left untranslated).

Mapmaking is not just a riveting read, but a relevant one too. Four decades after the birth of Bangladesh, the book might trigger further discourse on the eastern partition of India, which has been a subdued affair in Indian mainstream consciousness compared with the careful documentation of the Punjab partition by writers like Saadat Hasan Manto, Khushwant Singh, Bhisham Sahni and Urvashi Butalia. With the passing of the worst-affected generation of refugees, Mapmaking could also guide newer generations to their social lineage, familial moorings, warts and all.

In Mapmaking, the roles are often reversed, the assumed victim is often the perpetrator, and a thin veil separates the real from the imagined. As a line sketching a much-hassled Hindu elderly man in Two More Deaths describes: “A stubble at least a week old; another month and he’ll begin to look like a maulvi."

Divided by religion, united by history