Amassive sea of water must have burst out of the Himalayas on a path of destruction when, suddenly, a magic wand froze it into a cascading, glittering mass of ice—and it stayed there forever.

This is how visitors feel when they see the Pindari glacier, 3km long and 365m wide, close to Mt Nanda Khat. This magical ice sculpture that never melts completely, 3,820m above sea level, is the final destination of a popular trek in Uttarakhand.

Trekkers struggle through expansive meadows, damp jungles and loose gravel, slip and slide on transparent ice for five days over 45km to reach zero point. They leave quickly as the loose, crumbling mountains surrounding the glacier are too dangerous to linger on. 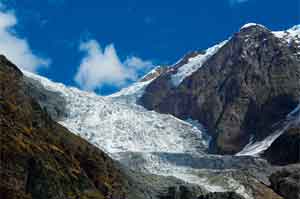 Somewhere on top of the glacier lies a slippery route for professional mountaineers even as the bottom drips water into the Pindar river meandering down a deep valley to merge with the Alaknanda river.

The Himalayas look lonesome, though the passage to Pindari is well-trodden by trekkers on their way to the icy glacier. But they have different reasons for being in the harsh outdoors, where the climate can change from sunny to stormy to hostile in hours.

Jay Kutchins from Chicago, US, dressed skimpily with just a little backpack, has been jobless since the economic downturn of 2008. A Russian couple wants to expose their five-month-old baby Lev to the land of yogis. A class of schoolchildren, all in their early teens, is on an environmental trip to pick up non-biodegradable waste.

Most poignant is the case of Tobias Kost from Stuttgart, Germany, who has come to Loharkhet, the village from where the trek begins, in memory of his father. Peter Kost died in 2000 on his way to Pindari, suffering a cardiac arrest just 9km into the trek.

“I have come here for memories," says Tobias, accompanied by his mother Heiderose.

Peter Kost’s memorial stone, placed prominently in a lush meadow en route, reads “Your paradise is here", and moves trekkers to place little wild flowers on it. They didn’t know him, but they understand his struggle.

The confluence of the rivers Alaknanda and Pindari. Photo: Himanshu Dutt/www.flickr.com/photos/myth_drinker

The vegetation varies from tropical at the foothills to temperate in the middle altitudes, and alpine higher up as the trek winds through streams and jungles of fir, birch, rhododendron and juniper.

At lower altitudes, clusters of an unusual lily evoke much excitement. These are Arisaema consanguineum, or perennial Himalayan cobra lilies that have an uncanny resemblance to the venomous hood snake.

Mementos you could be subject to are leech bite marks that you collect somewhere between Dhakuri and Dwali, in the damp and rain.

A little before zero point, in inky darkness, two flickering lamps light up in the freezing chill. A loud gong sounds and the tinkling of a bell accompanies it. A waft of camphor, burning wood and lavender fills the valley. As if hypnotized, campers walk towards the light.

It is Swami Dharmanand performing aarti in his part-rock, part-wood temple built into a cave, 2km from the glacier. A glowing idol of the goddess Durga draped in glittering finery and a shivling shaped out of a rock speak of the life and work of the frail man, nicknamed Pindari baba.

“For four-five years, I struggled. I never asked anyone for funds. I told myself, ‘I will ask God directly’," says the baba, serving a meal of rice, spicy potatoes and a green gravy dish made from wild grass and soybean nuggets. The Pindari baba does not expect payment for the meal.

Pindari baba, who has built a temple dedicated to the goddess Durga. Photo: Saiganesh Sairaman

The route to Pindari is interspersed with dhabas providing biscuits, instant noodles and steaming tea. But in the last stretch, where the terrain becomes too rough, the comfort of a warm roadside kitchen vanishes. It is this gap that Pindari baba fills beautifully.

Trekking a kilometre further up from Pindari takes one to a different dimension of the Himalayas. This is where the mountains close their doors on amateurs and lure the professionals.

A brilliant blue and red tent marks Camp 1. The drizzle and biting cold make us want to run into it uninvited. No one’s inside, but the belongings of a group of mountaineers are strewn around. A blackened cooker, tinned fruits, a pillow-sized pack of medicines, sacks of potatoes, nylon ropes…

For the most adventurous, zero point is the beginning of an expedition. Professional mountaineers go beyond Pindari via Traill’s Pass, a mountain pass difficult to cross, and there have been instances of tragedy, deaths.

At Camp 1, only one thing is locked by a long metal wire—a heavy pair of purple mountaineering boots with the initials “NK" boldly scribbled on them and officiously circled. As if a mountaineer were saying, “Help yourself to anything, but not my boots!"

Furry dogs Kaalu, Monty and Maggie accompany tourists right up to Pindari, bounding about, disappearing and resurfacing to everyone’s surprise. They are like temporary pets, and you know that in a blizzard, one of them will guide everyone to safety.

Horses Munna and Raju patiently carry tourists, their hooves coming within inches of dangerous falls but never missing a step. Load-bearing donkeys are the lifeline of tour planners.

Well after the trek is over, their jingling collar bells ring in the mind and the glassy glacier seems to clink a “cheers"!