Home >Leisure >Romance of the stars

Romance of the stars

Romance of the stars

In his forthcoming film What’s Your Raashee?, Ashutosh Gowariker, the director of Lagaan, Swades and Jodhaa Akbar, is in somewhat alien territory. The film is about Yogesh Patel (Harman Baweja), a young man in frantic search of a bride. Within 10 days, he has to choose from 12 girls (all played by Priyanka Chopra), each one of whom has a different raashee (zodiac sign). Can the director with very serious views about his art and the industry pull off a romantic comedy? He told Lounge about the making of the film, being an actor’s director and why his films are never less than 3 hours long. Edited excerpts: 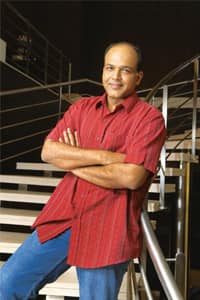 ‘What’s Your Raashee?’ is adapted from the Gujarati novel ‘Kimball Ravenswood’. Why did you want to adapt it?

My take-off point was that I wanted to do a film in a different genre. And then when I was looking from my memory bank, I couldn’t remove Kimball Ravenswood. Naushil Mehta had adapted it to theatre and Ketan Mehta made the TV series, Mr Yogi, in 1989. I got hooked to the idea of a man changing in the course of meeting 12 different girls. I am generally moved by characters that undergo drastic change in the course of a film—be it Bhuvan (Lagaan) or Mohan Bhargav (Swades) or Jalaluddin (Jodhaa Akbar).

I thought about it, but I didn’t want the audience to feel that there is only one heroine in the film. The girl who Yogesh marries would have had to become “the fairest of them all".

Indians are obsessed with astrology. How important is astrology in the film?

I’ve just about broadly focused on three or four characteristics of each raashee. For example, the Leo girl is known to have a rich mane; she likes to colour her hair in a particular way. The Cancer girl is very emotional. I am amazed by the science of astrology.

I am a very typical kumbh (Aquarius).

You are known to be an “actor’s director". Do you deliberately focus more on performance than technique?

Any director ought to. A great set or beautiful costumes can’t take a story ahead. I’ve been an actor myself, so it helps me understand what’s going on in an actor’s mind—what are the catalysts and triggers he is looking for. An actor has to bring himself to the roles he plays and it’s my job to ensure he does. When you say “the angry young man", Vijay and Amitabh Bachchan are inseparable, isn’t it?

This film is different from your usual big-scale work.

When I started off, I thought production-wise it would be easier because we were just coming out of dealing with 100 elephants and 75 horses (in Jodhaa Akbar). Little did I realize that this film is really big too—65 locations, 12 girls with 12 different backgrounds from Bhuleshwar, Dahisar, Ghatkopar and other Mumbai suburbs.

But the toughest part is to make the audience smile throughout. You have to carry off the impression that the story is real, yet it’s far removed from their reality—that’s what the best romantic comedies do. Give me 100 elephants any day. If I get a few smiles, I’ll be happy.

Naushil Mehta and I wrote the screenplay. The novel is very large in its expanse, so we made changes. I’m accused of making long movies, I didn’t want to make the longest movie in the world.

How long is this?

More than that. When I choose a story I decide its length, not when I’m editing it.

Your first film, ‘Pehla Nasha’ (1993), was an adaptation of Brian De Palma’s ‘Body Double’. Who are your influences?

My inspirations are varied. All the Indian masters: Bimal Roy, Satyajit Ray, V. Shantaram. They were the finest in the crafts of storytelling. Then there is Kurosawa and David Lean. When I decided to direct Pehla Nasha, I and my friend Deepak Tijori were in a “Let’s make a movie" mould. Body Double was a film we were very influenced by at that time. It was a remake of Hitchcock’s Vertigo and De Palma was this new voice with a new language. But it did not work, and that taught me a lot.

Your next is a historical film about the Chittagong Uprising of the 1920s.

Yes, it is about Surjya Sen, who is known as Masterda, and how he led a rebellion. Abhishek Bachchan is playing Surjya Sen. I have purchased the rights to Do and Die, a book by journalist Manini Chatterjee.

Have you ever thought of making a film in Marathi, your mother tongue?

I have always wanted to. Hindi has spoilt me with regard to budgets. The economics of the Marathi industry will not suit me.

What’s Your Rashee? releases in theatres on 25 September.